Now that I've started incorporating long rides into my training, I've started using Clif Bars again.  I have to eat solid food on the bike.  For some reason, gels aren't enough for me.  As our rides get longer and longer, that means I'll be consuming more and more Clif Bars.  At $26 + tax for a box of 12, I'll go through them pretty quickly given that I will use between 1 and 3 bars depending on the length of the ride.  I figured I could probably make something cheaper with things I already had in my pantry at home.  So I started scouring the internet for recipes.  I found a few that sounded good but I'm never really one to totally follow a recipe so I opted to make a few changes to suit my tastes.  Most of the recipes I found called for Rice Krispies and brown rice syrup and those were the only two things I didn't have in my pantry so it was off to the bulk food store.   While I was there, I discovered organic puffed quinoa cereal so I bought that instead of Rice Krispies.  I figured it was a better choice nutrient wise than the Rice Krispies.  And I love quinoa so I thought why not....! 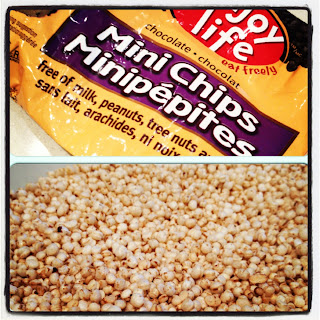 The main recipe I was following called for 2.5 cups of dry ingredients + 3 tbsp of ground flax and 1/2 a cup of dried fruit.  I ended up adding 2.75 cups of dried ingredients + 2 tbsp of chia + 1 tbsp of ground flax, 1/2 a cup of dried fruit and then 1/8 of cup of vegan chocolate chips.  I should have adjusted the liquid ratio a bit more but I didn't so when I went to pour the liquid over the dried ingredients it didn't quite seem to be enough.  I spread the mixture out into a greased pan but there were a lot of bits and pieces that weren't totally covered with the liquid mixture so they didn't quite set.

Then I thought I'd be cutting them up into small pieces anyway so I pulled a small handful out and rolled it up.  The chocolate chips had melted somewhat so the mixture was quite messy.  But I think that helped bind the mixture together when I rolled it up.  Rolling the mixture into balls seemed to make a big difference.  They stayed together and I could make them as big or as small as I wanted to.  I am totally crediting Lindsay Cotter and her Healthy Bites for the inspiration (I bought her e-book and these things are AMAZING).  The flavour combo is something I've been thinking about for ages and it turns out that Christina at The Athletarian has exactly the same taste.  When she visited the Clif Bar headquarters a few weeks ago, she got to make her own bar and chose exactly the same flavour combo.  Great minds think alike.

What is this flavour combo you ask?  Chocolate, Cherry and Coconut.  I'm calling it the Triple C.  Yeah, it's nothing short of amazeballs.  So without further ado, here is the result of yesterday's happy accident.

1.5 cups of puffed quinoa
3/4 cups of quick cook oats
2 tbsp of chia seeds
1 tbsp of ground flax
1/2 cup of large flake unsweetened coconut (I think smaller flake would work better but this is what I had on hand)
1/2 cup dried cherries, chopped
1/8 cup of chocolate chips (I used vegan ones as that's what I had on hand)
1/3 cup of brown rice syrup
1/3 cup of nut butter (smooth is better - I used peanut butter but I think I'll use almond butter next time)
1 tbsp of honey
1 tsp of vanilla

Mix all the dried ingredients together, including fruit and chocolate chips.  Put the brown rice syrup, honey and vanilla in a pot over medium heat and bring to a boil.  Add the nut butter and stir until combined.  Be careful not to let it burn.

Pour mixture over dried ingredients and mix well.   Let it cool slightly before rolling into balls.  Makes roughly 30-34 balls depending on the size. 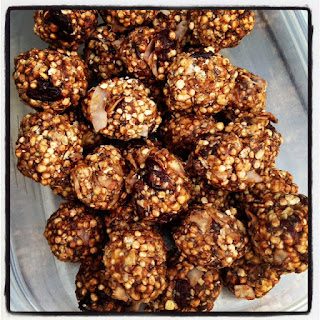 These haven't been road tested yet, but I will rectify that tomorrow as we're headed out for another long ride (yay for long weekends!!).

What do you think about this flavour combo?
Is there another combo you'd like to see?  I've got an idea for another one that I may try making tomorrow if I have time.

Posted by Phaedra Kennedy at 8:59 AM