Trying to Kick the February Blahs with a little #Sweatpink

Hellooo Friday!  Even though this has been a short week for us it's been crazy.  It's always hard coming back after a holiday but it's even more difficult when things are busy.  My brain was still on vacation for the first few days back.  I'm 100% back now, thank goodness.  I'm so glad we managed to get away when we did.  For some reason, February is always a tough month for me.  I always struggle with the "blahs" during this month and even though we went away, the blahs have managed to creep up and bite me in the butt.  I think it's been the amount of snow we've been getting.  I don't mind the cold, especially if it's sunny out, it's the snow that I have a problem with.  It really messes with my running.  Tuesday it poured rain and then the temperature dropped so everything froze.  I actually tried to run outside with my group and then after almost wiping out twice in the span of a kilometer, I decided it wasn't worth it so I turned around, got in the car and drove to the gym to hammer out 8km on the treadmill.  It wasn't pretty but I got it done.  I had hoped to do the same thing on Thursday but I woke up that morning feeling really rough.  The cold really wreaks havoc on my sinuses and I felt like I was getting sick so I skipped the gym and my run.  I'm racing next weekend and I don't want to chance getting anything.  Flu season is not quite over yet so I'm going to do my best to keep the cooties at bay until after next weekend.  We're expecting more snow and the potential of freezing rain later on today so it should make my 20 miler tomorrow an "interesting" experience to say the least.  I'm so over this lousy weather.  Just give me some sunshine and clear pavement pretty please?!?

Despite the blahs this week, there have been a couple of positives.  I'd say that Wednesday was probably the best day of the week.  I signed up for two more races:  Harry's Spring Run off 8km in April, just before Boston and the Bread and Honey 15km the first weekend in June.  It was also my first day back with my swim club after our vacation and I came back to find that I had been moved into a lane with some much faster swimmers.  Like a lot faster.  And much to my surprise, I actually managed to kind of hang with them on our workout.  I didn't get totally killed like I thought I would.  I definitely worked a whole lot harder than I have in a while but it was a welcome change.

The best part of Wednesday was that I found out that I had been accepted as a #Sweatpink Ambassador.  What is Sweat Pink you ask?  It's a community of like minded women that are into fitness and healthy living.  I follow a lot of the ambassadors on twitter and they are incredibly inspirational and supportive.  It seems like a great group of women and I am excited to have been asked be a part of the community!  For more info you can check out Fit Approach or just click on the I am a #sweatpink ambassador button in the top right corner of my blog.

At least February is almost over.  In less than a week, we'll be into March and to me, that means SPRING is literally just around the corner.  I cannot wait.

Do you get the winter blahs?  If so, how do you deal with them? 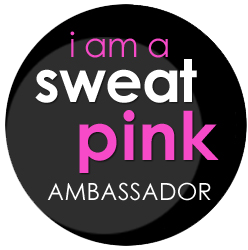 Posted by Phaedra Kennedy at 12:33 PM

When I lived in TN and there was an actual winter season, I had the WORST winter blues. I'd pray for Nov-Mar to fly by as fast as possible and the minute I would see my mom's flowers poking out the ground I almost immediately turned happy. Congrats fellow SPA! :-)

Thanks Beka! Yeah winter is tough! I am not a big fan of November or February, ha ha. I think I need to move somewhere WARM!

We don't get snow here on the Gulf Coast but I can imagine it being tough. Congrats on Sweat Pink...welcome to the family! You will love it!!!