Hello Mexico: Fun in the Sun & Facing my Fears

G and I spent last week at the beautiful Paradisus La Perla in Playa del Carmen, Mexico.  We left the day of the huge snow storm and lucky for us we got out just before all hell broke loose in Toronto.  It didn't take long for us to get used to our vacation routine.  This was the first time we've gone away when I've had a race to train for so I didn't have an excuse to slack off like I normally do.  G said he wanted to get a workout in every day if he could.  I figured that would be doable.  The gym there was actually pretty decent and they offered yoga, pilates and spinning classes as well and there were two huge pools we could swim in.  The tough part would be getting a good run in.  The resort grounds were not conducive to doing any sort of run unless you wanted to do a series of 2km laps, so you had to leave the resort.  It wasn't the nicest area just outside the resort, probably the Mexican equivalent to Regent Park but if you were going to be out in the day, it was ok.  So that's where we did our runs.  It was fairly flat and relatively shaded which made a huge difference as it got quite hot once you were out in the sun.  We had perfect weather for the entire week.  Sunny and hot.

Over the course of the week, I managed to swim 3 times, run 3 times (twice outside and once on the dreadmill) and I did one full body weight workout and one upper body weight workout.  Not bad for a week away.  Obviously my eating was very different than what it's normally like but it didn't matter, it was only a week and the whole point of a vacation is to escape your routine.  And we definitely did that.  I had one of the best meals of my life at one of the restaurants there.  It was a tasting menu that took us over 2.5 hours to get through.  It was nothing short of amazing.  G and I both threw caution to the wind in terms of trying different foods.  I'm much more of an adventurous eater than G is but he really stepped up to the plate.  Perhaps that's why both of us had stomach issues by the end of the week, ha ha.   Oh well.

We don't normally celebrate Valentines Day but it was hard not to get in the mood at this place.  The resort had all sorts of events planned along with a big party at the Red Lounge (one of the many bars at the resort).  That was all fine and good but we opted to do something a little different.  Before we left, G had said he wanted to do at least one excursion.  The week went on and we didn't book anything.  We did take a trip into Playa del Carmen to do some shopping but that was it.  There was one trip in particular that G was really interested in and that was the excursion to Rio Secreto.   It was close to the resort and it wasn't a full day excursion, which appealed to me.  The main thing holding me back was the fact that I am incredibly claustrophobic and this involved going underground into a series of caves (cenotes).  The mere thought of that made me nervous.  But, relationships are all about give and take and I figured I've been working on dealing with my claustrophobia that this would probably be a good test.  So on the Wednesday afternoon we booked the last spot available for the tour the next day.

Our tour was scheduled to depart at 11:30 am so we had some time in the morning to get a workout in.  I hit the 'mill and did my mile repeats and an upper body & core workout.  Then we headed over to the breakfast buffet (which was amazing) and fueled up.  I could feel the apprehension building.  Our driver picked us up and said we had to stop at one other resort to pick up 5 more people.  We picked those folks up and we were on our way.   20 minutes later we pulled into the park.  We were given waivers to sign, and sat through a short video.  The guide asked if anyone had problems with enclosed spaces or darkness.  I was tempted to put my hand up but I didn't.  I put on a brave face but my stomach was in knots.  We had to take a bus into the jungle where the cenote was located.  That ride was brutal.  If we were on that road any longer, I would have had to take a gravol, there were so many rollers.

Once we arrived, our guide, Francesca, met us and helped us get outfitted.  We had to wear a life jacket, a helmet and water shoes but a wetsuit was optional.  Given that I was in a bikini and the water was fairly cold, I opted to put on a wetsuit.   Then we were off into the jungle.  Before we could enter the cave, we had to ask permission so we went through a small ceremony with a Mayan shaman which was pretty cool.  As we came up on the entrance of the cave,  I was feeling a mix of anxiety and excitement.  The feeling of excitement caught me by surprise.  I knew it was going to be an amazing experience as long as I didn't let my fears get the better of me.

The minute we went down those steps and into the cave, it was like entering an entirely different world.  A world with no sound and no light.  The quiet was almost overwhelming at times.  The first few meters were a little tough but I was so focused on where I was walking that I didn't think about the fact that I was in a cave over 75 feet underground.  We'd stop every so often so Francesca could talk about the different formations we were seeing.  I was ok when we were moving but when we stopped, I could feel the anxiety building.  I made a point of really focusing on what Francesca was saying and that seemed to help.  As we moved along, I actually started to feel better.  A sense of calm started to come over me.   I actually started to look around more.  It was breathtaking. 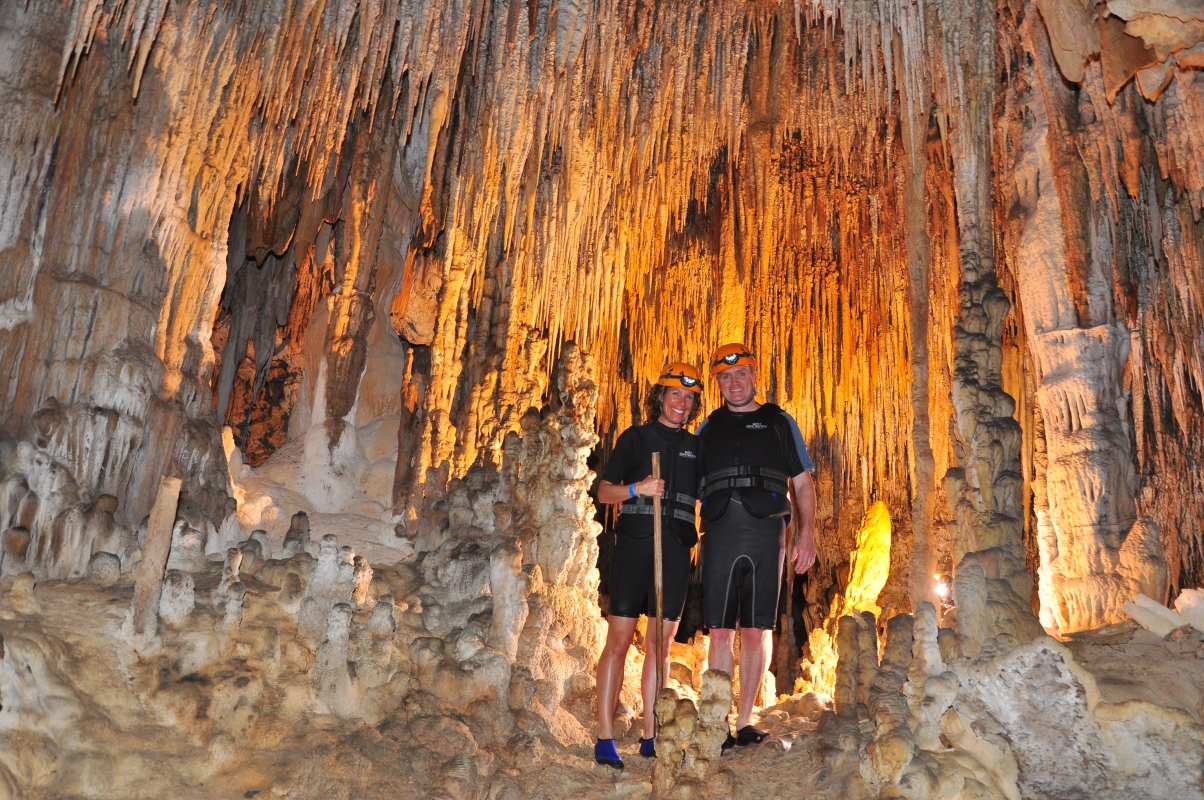 I think the fact that I was with G made it easier.  I also knew how long the tour was and how far we were going so that helped quell some of the anxiety.  I can honestly say that I think the sheer beauty of what I was seeing made me forget about the fact that I was underground.  Sure there were a few points where I felt claustrophobic - there was one point where we had to crouch down and go through a narrow opening in the rocks - but for the most part, I felt ok.
I can honestly say that this was one of the most amazing experiences of my life.  It was like going to another world.   It was definitely an amazing and unique way to spend Valentines Day and it's certainly something neither one of us will forget.  I still can't quite fathom the fact that I did this.  I faced one of my deepest fears and managed to actually enjoy myself along the way.

All in all, it was a fantastic week.  It felt like we were gone forever.  Now I'm back, refreshed and ready to get back to business. Bring it on.

Do you have any fears that prevent you from doing certain things?

Would you have gone on this excursion?
Posted by Phaedra Kennedy at 11:07 AM

I'm not going to lie, I scrolled through this post several times just so I could look at your amazing picutres! Way to conquer your claustrophobia , Phaedra. I'm so glad that you were able to face that fear and enjoy an amazing excursion. <3

Very cool P!!! When we went on our cruise last summer, this was one of the excursions available at our Cozumel stop. We didn't do it, but heard lots of great things about it. We went to Tulum (Mayan ruins). If you go back you should definitely check them out. Very beautiful place!

Thanks Gina! I'm so glad I did it, it really was spectacular.

This was our third time in Mexico and the first time we went (on our honeymoon), we visited the Mayan Ruins in Tulum. THAT was incredible. We also went to Cozumel on that same trip - very cool little island!

I love caves, so much fun!!