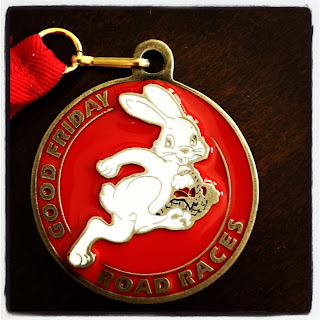 I have to admit, I wasn't feeling up to racing this morning.  But, given that I re-jigged all my workouts this week so I could race, I figured I might as well.  And, I wanted to see how much quicker I'd be able to do this race in comparison to last year.   Gary gave me a goal time of 1:07:30.  I figured I'd go sub 1:10:00 which would be a 6 and a half minute improvement over last year's time.  I'd be happy with that.
It was a perfect day for a race.  The sun was out and it was nice and cool.  There was a bit of a wind but it wasn't too bad.   I opted for shorts and a long sleeve once again but decided to give my compressport calf sleeves a go instead of my compressport full socks.   Perfect choice.  I topped it off with my Team RF vest, although I probably should have worn my singlet.  But you live and learn, right?  14 years of running and I still can't seem to get it right.

I didn't have a particular plan for this race.  I just figured I'd go out and run it like I ran the Chilly.  Go as hard as I could for a long as I could.   Sometimes it works and sometimes it doesn't.  Given that the distance was shorter than the Chilly, I figured there would be less of a chance of an implosion.   Last year I started a bit farther back from the front.  This year Linnea and I were almost right up at the front.  They go by gun time so I figured every second would count.  I knew I was racing some fast women.

The gun went off and I took off.  My lack of a really good warm up was apparent in that first km.  My legs felt a bit sluggish.  I figured that wouldn't last much past the big hill that was coming up.  I thought about trying to pace myself for the first bit but I was caught up with a bunch of guys and running on adrenaline.  On the downhill before the big climb, I was caught by a couple of women.  And then on the hill I was caught by 3 more.  Crap.  Two of them were holding a strong pace and started to pull away on the hill.  No way I was hanging on to either of them.  Then the other 3 women passed me.  And then another one, last years race winner Paolina Allan.  Not the way I wanted to start the race.  I managed to tuck in behind one of the ladies and stick to her.  We made our way along the rollers and up to Plains Road.  I managed to pass one of the women.   Paolina was pulling away so I figured I probably wasn't going to catch her.   I had two other women in front of me and I ran with them towards the cemetery and down the hill back towards Plains Road.  When we made the turn onto the downhill we were hit with a strong wind, coming out of the north east.  At this point we split up a bit.  I figured the run along Plains Road was probably not going to be very pretty and it wasn't.  I remember running side by side with one of the ladies.  At some point along Plains Road we lost the third woman.  Much like last year, this stretch was very windy.  I was actually feeling pretty good through here and pushed the pace.

I saw my friend Kirsten through here and gave her a high five.  She was looking strong.  I managed to pull away from the girl I was running with.  She wished me well.   I thanked her and pulled away.  Now I was running solo.  And a wee bit scared.  I knew that at any point, any one of these women could come along and pass me again.  I wasn't sure if I'd have anything left to respond with.  There was no one in front of me for at least 600-700m and the few folks that were ahead of me were some really quick moving guys so I didn't think my normal reel 'em in game was going to work.   I had no bunny to chase.  I had become the bunny.  Great.  Not generally a position I like to be in.  I suppose I am a predatory runner.  I feel like I do better when I have someone to chase.  I don't like to be chased.  But that was precisely what was happening now.

Given that it was Easter Weekend I figured I might as well try to channel my inner bunny and run for my life.   I came through the half way point in 33:56.  Not bad.  Not a PB for 8km but given that I had another 8km to run, I couldn't complain.  I knew one of the ladies was still relatively close to me because I could hear the crowd cheering Go Ladies as I went past.  All I could hope was that I could hold my pace for the second loop and that the other ladies behind me had gone out too fast.
I barely held it together up the big hill and through the rollers.  I was feeling pretty rough.  I made it back out to Plains Road and realized that somewhere along the way, I must have put some distance between the women behind me.  Sweet.  I was struggling a bit and eased up a bit on the down hill that led back to Plains Road.  Running completely solo into the wind was going to be tough.  I hit the wall of wind and pushed my way along.  With about 3.5km left, I suddenly had company.  I glanced to my right to see a woman run past me.  Don't panic.  This is good.  You can draft off her.  So I tucked in behind her.  Ahhhhh.  Funnily enough I was passed in this same area last year and I drafted off that woman, only to turn around a beat her across the line.  Hopefully I'd be able to do the same this time.
I glanced at my watch and we were doing just over 4 minute kms.  It felt effortless thanks to my new friend.  I stuck behind her for as long as I could.  If she surged, I surged.  I wasn't going to let her go.  We were joined by a guy who we quickly ditched as we turned towards the 9 mile mark.  I could hear this woman's husband / boyfriend who was riding his bike along side her, telling her she only had 1.5km left.  I took advantage of the slight down hill to push the pace.  I figured I could go all out for another 7 or so minutes.  I was hoping that this woman wouldn't have an answer to my surge.  I could hear her just behind me.  I channeled my inner bunny and pushed again.  I glanced down at my watch and saw 3:57 km's.  Hell yeah.  I suddenly realized that there was also a very good chance I'd make Gary's time goal he set for me.  I definitely knew I'd be well under 1:10.  Woohoo.  As I made the turn up the road towards the finish line I thought about last year's race and the crazy push to the finish line I made then.   There was no way this bunny was going to get caught.  No way.  I couldn't hear anyone's footsteps any more but I didn't let up.  I turned the corner and saw Gary and just beyond him, the race clock at 1:07:25.  Ahhhhhh!   I pushed as hard as I could.  Would I make it???

Ah well, it was certainly better than I expected to do so I was quite pleased regardless.  Then Gary told me I was the 6th woman across the line.  Sweet!!

I ended up 3rd in my age group this year but got bumped up to 2nd because Paolina won the over all Masters race.  Last year I was slower but ended up first as Paolina was the overall winner and then Linnea got the overall Masters win.  Just goes to show you the caliber of women that were at this years race.  The fact that half of the women in the top 10 overall were in my age group says it all.  There were a lot of fast old broads out there!

This years race seemed to have more volunteers on the course, which was great.  The race swag was excellent as well. Entrants got a great little knapsack along with 2 sample sizes of Clif Bar products.  At registration I was able to grab a couple more Clif Bars as they had some extras.  Always a bonus! The prizing was also really good as well.  Last year I got a pair of Saucony arm warmers, which I then lost at Scotiabank in October.  This year, I lucked out and got another pair!  Yeah!

As much as I didn't feel like racing, I'm glad I did.   I quite like this race course and I have to say, I really like the 10 mile distance.  Long enough that you need to put in the miles but short enough that you can go hard.    I may just make this a Good Friday tradition.


Posted by Phaedra Kennedy at 5:50 PM