Monday Musings on a Tuesday: When Opportunity Knocks

I had a hangover yesterday.

But it wasn't THAT kind of hangover.  It was an exercise hangover, ha ha.  This past weekend was nothing short of amazing.  Actually, the last 4 days have been amazing.  All because I offered up my time.

This past weekend, I got the opportunity to be a part of a Peaks Coaching Group Women's cycling camp led by the one and only Hunter Allen.  He's kind of a big deal in the world of cycling with power.  It all came about on Wednesday when a friend of a friend here in Clermont posted that she was looking for another female rider that was willing to cover off her "C" group of riders.  I thought why the heck not.  I'm always looking for new people to ride with AND, it was all ladies which is even better AND, I'd get to learn from one of the best in the business.

The camp was an intro to power and cycling skills camp.  I've been training with power for almost 4 years now so I understand the basics but in terms of real in depth analysis, I feel I have some gaps in my knowledge.  And I know my cycling skills need some work as well.  What better person to learn from than Hunter and what better environment than with a group of likeminded women.  It was a no brainer.

It also gave me the opportunity to meet Julie McKenzie, who is the friend of my friend Marianne.  Julie added me on Facebook shortly after my second trip to Clermont in October 2016.  I never got a chance to meet her last year so when she posted on Facebook that she needed some help with this camp, I jumped at the chance.  It was one of the best impulsive decisions I've ever made.  You know when you say yes to something and then you second guess yourself and think oh shit what have I done?  Every single bit of worry or apprehension I had completely evaporated within 10 minutes of meeting the awesome group of ladies I would be spending the next 3 days with.

There were 14 ladies in total, not including me.  One from Canada (Winnipeg to be exact), one from Bermuda and the rest from various places across the US.  It was a diverse group in terms of abilities but all of these ladies knew their way around a bike.  A few of them were racers, a handful were triathletes and the rest were just women that really enjoyed riding their bikes.  All of them were there for the same reason - to improve their skills and their knowledge.

The camp started on Thursday night with a 2 hour talk about cycling skills and the basics of power and why it was a more reliable metric than heart rate.  Hunter touched a bit on the metrics in Training Peaks but the big ones he focused on were TSS and IF (Intensity Factor).  That two hours flew by.  I have notes scribbled in a notebook that I have to decipher when my brain is up to the task, ha ha.

The next day was divided up into two main workouts.  The first 2 hours of the day were spent doing drills, getting the group comfortable riding in a group with other people around them and learning how to handle their bikes in a group.  We did some wheel touching and shoulder leans while riding in circles on grass.  That was incredibly unnerving but my partner, Sarah, and I managed to do it.  Not without a lot of nervous laughter though.  We then headed off to a parking lot to practice steering and cornering.  I haven't gotten the hang of the steering technique that Hunter taught us, but the cornering was much better.  Especially cornering to my right.  I'm much more comfortable going fast that way vs. cornering left.  I now know what I need to work on.

From the parking lot, we headed off onto the newly paved Hancock Trail to learn how to pace line.  We rode along there and then up the back of Sugarloaf Mountain and then down the front side.  I had such a blast on that descent.


We then turned around and headed back to the hotel for lunch and a group data analysis session.  I found these sessions to be so insightful. Hunter would download everyone's Garmins and upload the files to WK04 and then analyze areas he thought people did really well on and areas where they could improve.  He then gave suggestions on things they could do to improve.

Saturday was our longer ride (90km) that consisted of a 1 minute power test (up a hill) as well as a 20 minute FTP test.  I have never done an FTP test outside.  It was evil and awesome all at the same time.  The course they mapped out had some good climbs but some good descents as well.  We were also dealing with a massive headwind and a lot of heat.  This past weekend temps were in the high 20's low 30's.  It was hot.  We did that after close to 45km of riding already.  It was hard.  I'm not used to doing a TT on my road bike either.  I came away with an FTP of 207w according to Hunter.  He went with my normalized power (218w) for the 20 minute segment because the course was hilly and it wasn't a steady state effort like it would be on the trainer.   It's not where I was last year but it's getting closer.  I suspect by the time I come back from Florida it will be close to where I was heading into my peak training last year.

Sunday was spent learning about rotating pace lines.  It was a little touch and go at first but once we got going, we did a pretty good job.  It's not an easy skill to learn and if you are nervous in a group or you're unsure of the skills of the people that you're riding with, it makes it challenging.   Once we had that down, we stopped on a flat stretch of road and learned how to sprint.  We practiced learning how to shift in the drops while being out of the saddle (AHHH), how to let the bike rock back and forth.  We then started sprinting.  We did some sprints in the small ring and surprisingly that's where I had my best power effort of the day, ha ha.  We then moved to big ring sprints.  Once we had practiced those, we started racing each other.  Julie and another woman, Mia, who is an elite road racer and coach from Wisconsin, raced against each other and the speed was just incredible.  Mia hit 1000w.  ONE THOUSAND WATTS.  I can't even FATHOM that.  I think my max was 586w.

After we had sprinted our hearts out, Hunter broke us into groups.  I was with Julie's group.  We strategized, rode down to the start and rolled out. 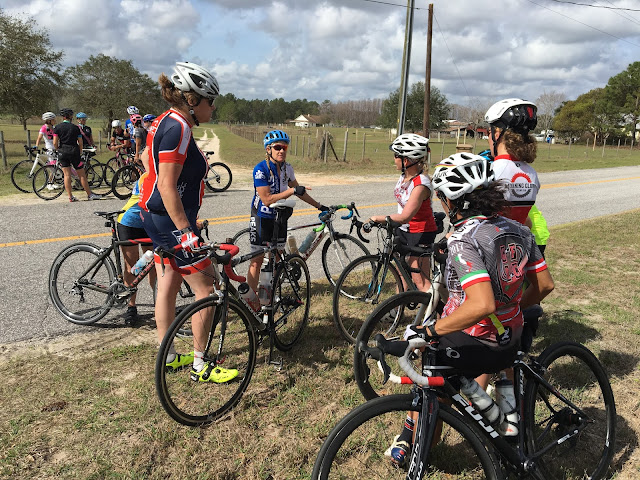 Our plan was for Julie to cover the breaks and then the rest of us had to keep Katherine, our sprinter sheltered.  But the other team went on the attack right away and threw us for a loop so we all just ended up chasing people down the road.  For the second race Hunter gave us a strategy he wanted us to stick to.  We were going man to man so Julie assigned each one of us a person to mark.  We rolled out again and the jostling for position started.  This really felt like a race, there was a lot of moving around.  Katherine, who has raced for years, knew what to watch for as the rest of us were just hanging on for dear life.  I was near her at one point and I could hear her saying they were forming a lead out line.  I watched to see what Mia, a veteran racer, was doing and she was obviously pulling Lynda, who was the woman that I had to mark.  So I stuck to Lynda's wheel like glue.  I could see them moving up through the group and over to the right hand side of the road.  I kept on Lynda's wheel.  Mia was getting closer to the front.  I knew if she got past the front of the group, that would be it.  A small gap started to open up on the right.  We were getting close to the finish line.  I was pretty sure I heard Katherine saying watch Mia and Lynda.  The gap opened up a bit more so I thought I'd catch them off guard, shoot the gap and sprint to the line.  I didn't think Lynda could out sprint me if I got the jump on her so I went for it.   I didn't hear or see anyone coming after me but I knew someone would.  Sure enough, just as I got to the finish line, I see Mia's wheel come up beside me.  I'm pretty sure she caught me right at the line.  Had I waited another 15-20s, I think I would have gotten to the line first.  But DAMN was that ever exciting.  I totally get the adrenaline rush.  That was a LOT of fun.

Back at the hotel we went over our data again.  I got some insights into where my weaknesses are and  how I can improve them, which was immensely helpful.  Hunter also looked at people's overall fitness trends if they had a lot of data on their Garmins.  I only had data from the end of December so there wasn't a lot to look at but you can definitely see the training load build over the last little while, ha ha.  This weekend resulted in a massive peak in fatigue so we'll see how the next few days go.  You know you're tired when your Training Peaks app tells you that you should consider taking a rest day, ha ha.  So I took yesterday off and was still feeling a fair bit of fatigue this morning so I skipped my swim.  I may go later in the day as long as it doesn't rain. 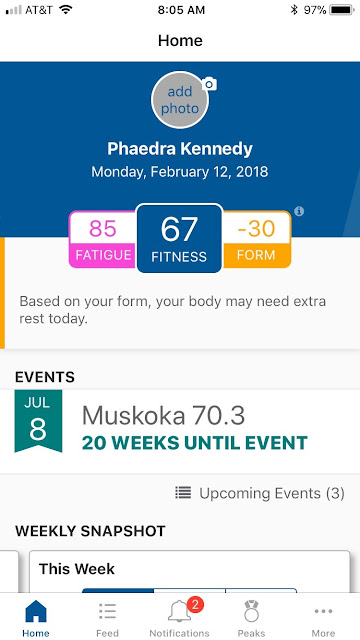 I covered 239km on two wheels last week, the majority of it over the weekend.  That also included 1844m of climbing!  It's been a long time since I've cycled 3 days in a row or climbed that much in 3 days (hello indoor riding!)  It wasn't what I had planned for the weekend, it was a million times better.

I can't even begin to thank Julie enough for bringing me in to the camp and letting me stick around for the weekend.  It was an experience I won't soon forget.  I hope to cross paths with these ladies again.

Posted by Phaedra Kennedy at 9:17 AM