Well, I've gone from weeks left to just days now.   We've met so many great people here over the last two months, I'm definitely going to miss them.  I'm REALLY going to miss the weather and the fact that I can just walk outside with my bike and start riding without having to deal with much in the way of traffic.   The two month stay was going to be a test to see if we'd like being here and the answer is a resounding YES.  Now if only the dollar would rebound a bit!!

As I mentioned last week G was on holidays this week so we did some exploring.  I had every intention of getting my race report done but alas, that has yet to happen.  Once again, it was too nice to sit inside.  With the exception of one day where it rained but I happened to be outside in that anyway, ha ha.

On Monday we drove out to St. Augustine, which is apparently the oldest city in the US and spent the  afternoon walking around.  It's quite beautiful.  Very touristy but still really lovely.  It was a gorgeous sunny day so it was just nice to be outside enjoying the weather.  Both of us really needed to move around as we were both pretty stiff from the race the day before.  I think a couple of hours on our feet helped get the blood flowing.   By the end of the day we both felt a lot better.  I think the sunshine and lobster & shrimp tacos helped, ha ha. 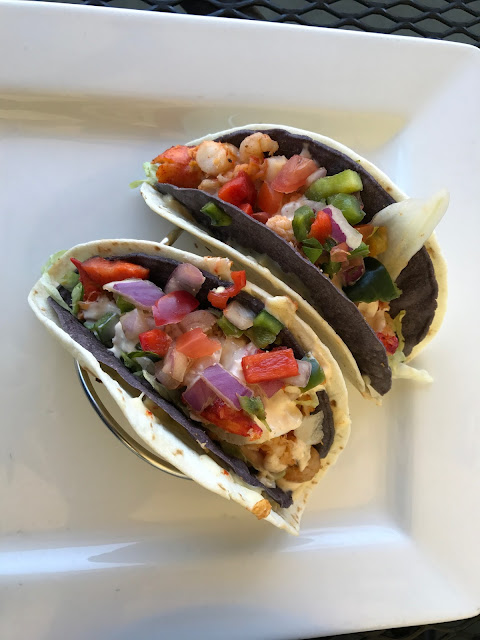 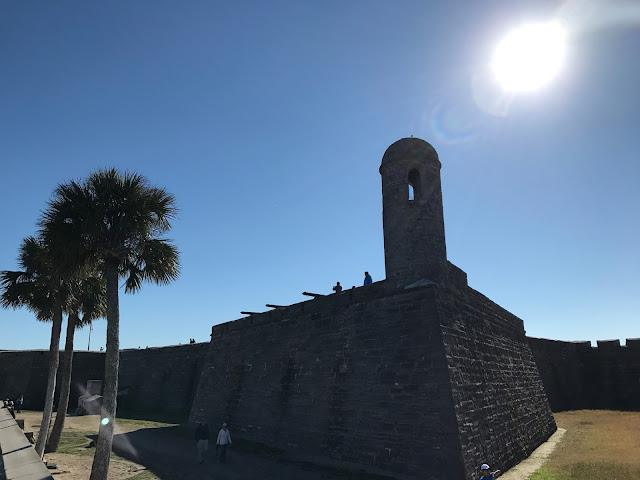 On Tuesday G was hell bent on going for a ride as we both ended up sleeping in and skipping swimming.  I wasn't sure if I'd be recovered enough but I didn't want to sit around doing nothing so I agreed to go with him and just said I'd keep my HR in zone 1-2.  Which is exactly what I did.  We ended up riding WAY longer than we had anticipated.  It was just so perfect outside, it we didn't want to stop.

On Wednesday G had a little bit of work to do and he wanted to ride again and go for a run.  I wasn't ready to run and I wanted to give my legs another day so we did our own thing.   I ended up going to the pool for a short swim and a very short weight workout.   For some reason on Wednesday night I developed a brutal sinus headache.  It woke me up at about 2:00 am so I used a bit of nasal spray and tried to go back to sleep.  That didn't happen.  I tossed and turned for another hour, my head pounding.  I resorted to taking Sinex Night, which is kinda like NyQuil.  Needless to say, I missed my Thursday morning swim AND my normal ride.  I finally got myself out the door around 9:30 and opted to ride to the top of the Apopka Trail.  I didn't quite make it there because the clouds were rolling in fast so I turned around and hammered back trying to beat the weather.  It didn't happen.  I got caught in my first Florida downpour.  Holy CRAP.  I was soaked.

Friday we planned on heading into Dunedin to see if we could get perhaps get Jays tickets but it was totally sold out.  They were playing the Red Sox and it was March Break.  We probably should have tried to get them before hand.  G was hoping to pick up something for our nephew but since we couldn't get tickets, we couldn't get inside to see what kind of merchandise they had.  We made the most of our trek and wandered around downtown Dunedin.  We stopped for lunch and once again I had fish tacos.  So.  GOOD.  We took the scenic route back to Clermont and I had a monster nap in the car.  Not sure why I was so tired but I was.

Saturday we had signed up to do the Clear Air ride.  They had multiple distances and we chose the 160km.  Mainly because you got a little finishers medallion at the end, ha ha.  And because I really wanted to get out and do a really long ride.  The ride started in Inverness, which was about a 55 minute drive from Clermont.  We got out there for about 7:30 am witnessed the most beautiful sunrise, got ourselves registered and started riding. 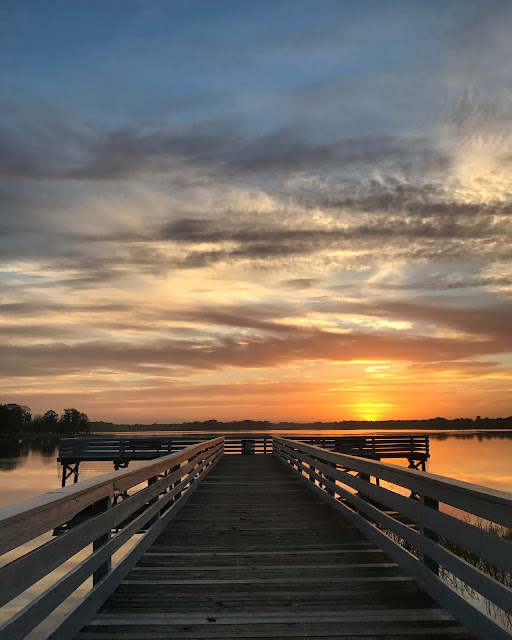 We were cooking along comfortably at about 28kph.  I felt good.  G felt good.  The sun was playing hide and seek in the clouds and then at around 10:30 it finally came out.  It was a stunner of a day.  At the rate we were going I figured we'd be done the 160km in under 6 hours, especially since the way back to the finish was mostly downhill.  We were motoring along, almost at 95km, when all of a sudden I heard a small pop followed by what sounded like steam escaping a bag.  I could feel myself slowing down.  CRAP.  I had a flat.  So I yelled to G to stop and we pulled off to see what the damage was.  He checked the wheel and couldn't see anything so out came the pit stop and he tried to fill up the tire.  I could hear air coming out of somewhere.  So we spun the tire around and sure enough, the pit stop was coming out of the sidewall.  With no spare tubular, I was done.  When you're riding tubulars, it's generally a good idea to bring a back up so you don't get stuck doing what I had to do, which was ride back on a flat tire.  When your tire is flat and you're on carbon rims, you cannot move quickly or you risk potentially damaging the rim.  I went from averaging just over 28 /kph to 10 kph.  It took me 26 minutes to cover the first 5km back.  I could have run the 5km faster than that.  I picked up the pace to about 13 kph and stayed there.  It took me almost an hour and 15 minutes to go 17km.  I was hungry and disappointed by the time I met up with G.  I had really hoped to be able to ride the 160km but alas, I'll have to save the century for another day.  I'm sure I'll have plenty of opportunities this summer!

My Garmin Connect speed file from Saturday's ride.  Gee, wonder where I got the flat??

Anyway,  it was a pretty action packed week of fun in the sun.  The weather cooperated for the most part (save the rain storm I was caught in) and we got to explore a few more parts of Florida.

In terms of training, I had a pretty big week even with taking two rest days.  This is how it went down: 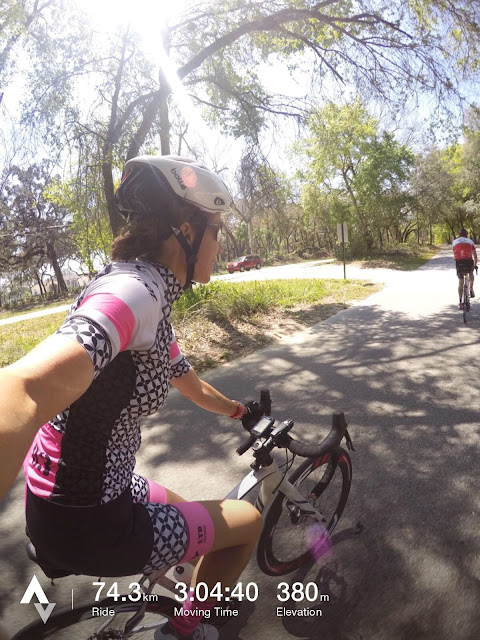 Wednesday:  1829m swim (2000y) + 35 minutes in the gym.  I REALLY need to get back to lifting regularly again.  I had just gotten into a good groove then I slacked off again.

Thursday:  87km ride including a hammerfest back to the house.

Sunday:  16km brutally hot (but stunning) run on the Clay Trail + 28km spin for coffee in the afternoon + obsessively checking Sports Stats for my athletes results from Around the Bay!  :) 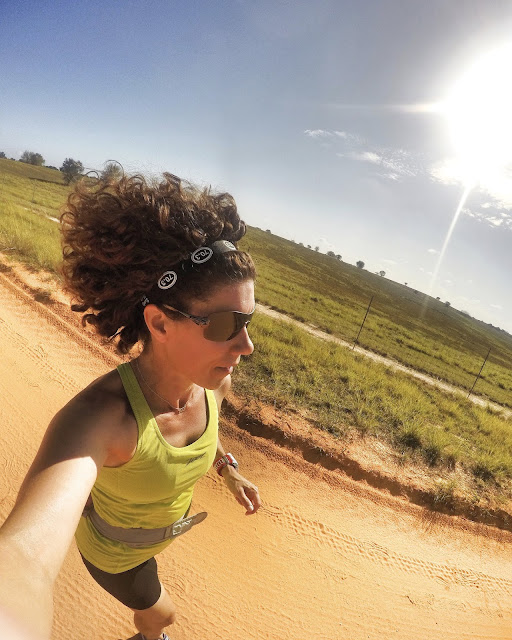 Our days are numbered here and while I'm sad that this adventure has come to an end, I'm excited for the next round of adventures!

I hope everyone had a fabulous weekend! I'm going to try to bottle up this Florida sunshine and bring it back with me!

Posted by Phaedra Kennedy at 8:04 PM