So, those of you that have been reading along know that I've had some leg issues.  More specifically nerve related issues.  My chiro thought it might have been my piriformis and we worked on that but I was still experiencing pain and range of motion issues even after two treatments.  I went to see Lauren yesterday for a "check in" appointment (that I almost canceled) and I filled her in on everything and she did an assessment and figured that I was having some disc issues.  Specifically my L5.  UGH.  So she did some work to release things and did some nerve tension work which made me feel a lot better.  Sore, but better.  And then she said those 6 dreaded words:  "I don't think you should race".

She said I could if I wanted to but I could risk doing more damage to my nerve / disc and advised me not to.  She's right.  I have to keep my eyes on the BIG prize, which is Tremblant in June.  That being said, I was really looking forward to racing on Sunday.  I have a couple of friends racing as well as one of my athletes so I figured it was going to be a blast.  Oh well, on more race fee down the toilet.  That will be number THREE this year.  I will be there at the finish line though.  And I'm not down for the count, so there's that.  I "should" be up and running (ha ha) hopefully by late next week.  I have a follow up next Tuesday to see where things are at.  If I'm ok, then I slowly work back into running and limit my really intense speed work to once a week.  Or, if I'm going to have a couple of speed work sessions, then ideally there's 3-4 days in between them that I'm NOT running.  I can't do a hard long run, have a day off and then do another speed work session.  I might have been able to do that 2 years ago but it turns out that my body doesn't like that any longer.

So, let's chalk that up to learning what my body can handle as it gets older and move on to some fun stuff.  Like this amazing outfit from Zoot. 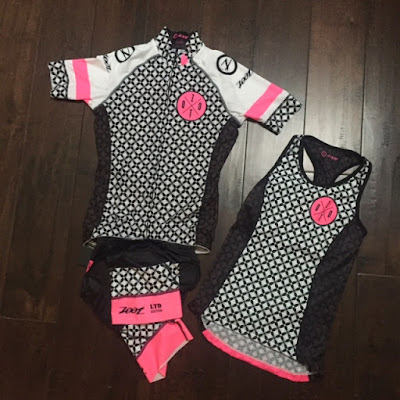 I can't wait until it's warm enough to wear this!  Speaking of which, the temperature these days is KILLING ME.  It's downright COLD right now.  Mother Nature, get your shit straight, it's almost MAY.  I should be going sock less now!

But enough about the weather.  It's Friday.  That is reason enough to celebrate.  I'm not sure what my coach will have planned for me over the weekend now that I'm not racing.  IF there's a ride, it's going more than likely to have to be outside because our Pain Cave has been dismantled.  Yup.  G went nuts and cleaned out the basement because we have someone that is going to start working on it right away. 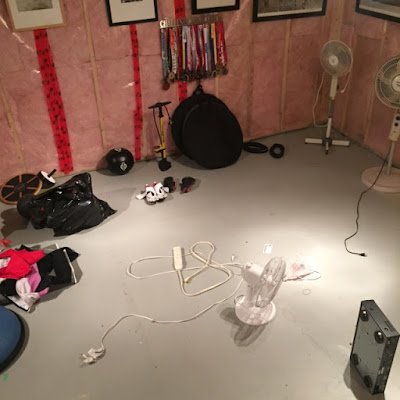 We now have a mini Pain Cave in one of the spare bedrooms upstairs.   Not really ideal but it's better than having nothing!  He even managed to set up the TV.  It only gets Netflix but that's ok.  There are plenty of things to watch on Netflix!  He was only able to set up one computrainer in there due to space so that means only one of us can ride at a time. 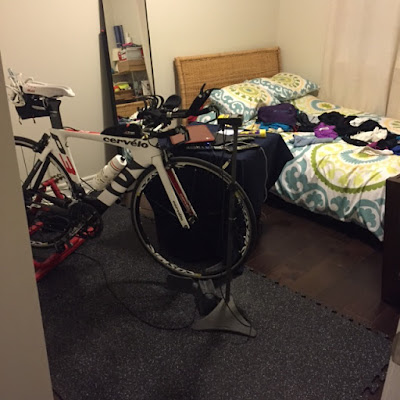 Anyone else racing this weekend?  This seems to be THE weekend for racing in Toronto!

Posted by Phaedra Kennedy at 9:24 AM