Good Morning!  I'm coming to you from the comfort of my couch, watching yesterdays stage of Le Tour.  G and I had decided to take today off after racing yesterday but then he had to go to Cincinnati for work last night so, I'm sitting in his spot on the couch with my feet up, enjoying a coffee.

Even though it didn't really feel like it, this week was pretty action packed workout wise.  It was a short week because we had the Canada Day holiday right in the middle of the week.  That made for a weird week.  Tuesday felt like Friday and Thursday felt like Monday.  But it also meant that we got to do a nice long ride in the middle of the week.

I did my first ride with Morning Glory on Tuesday morning.  Holy smokes did I ever get my ass handed to me.  Those guys are a whole other league.  I worked so hard, harder than I would have worked on the trainer.   But I loved every second of it.   So much so that I joined the club.  They were nice enough to give me the Yellow Jersey as well, ha ha. 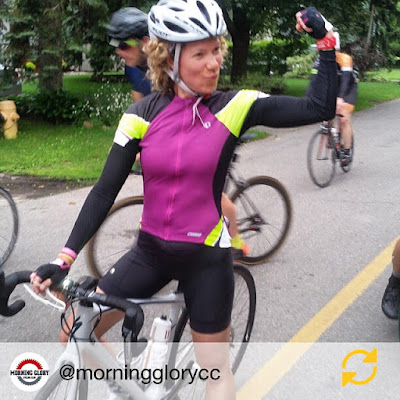 My legs definitely felt Tuesday's ride on Wednesday's ride.  I think my legs were just starting to come back when I rode on Tuesday and then I beat the crap out of them.  Surprisingly they felt pretty good on my run on Thursday other than the sciatica that's been plaguing me.  I had someone work on it right after the XTerra race and that helped a bit.  Then at the Muskoka Expo they had massage therapists there so I had a lovely woman really work on getting some of the knots out that are deep in my right glute.  I couldn't believe the difference.  I was REALLY worried about racing yesterday but she really helped loosen things up.  I'm going to have to keep on top of that if I want to keep running.

I certainly didn't expect to do 3 races in the span of 4 weeks.  Race, recover, repeat, ha ha.  Although the XTerra trail race was a last minute decision.  That race report is coming, it's partially written.   I'm going to have to really take it easy over the next couple of weeks.  Thankfully our next race isn't until the end of July.  And it's short.  This week will involve very little, if any, running, lots of swimming, foam rolling, stretching and maybe a couple of short easy bike rides.  I'm sure we'll do a long ride on Saturday but it will be fairly leisurely.  We're heading up to Collingwood mid July for a training weekend with a bunch of the WTP crew.  That should be fun.

So, on to last weeks workouts:

I definitely need to get back into the pool a little more regularly.  My swimming has been next to non existent since Eagleman so it's time to rectify that!  Which I will do this afternoon when I head down to the outdoor pool by my house.

How was your week of workouts?  Hope all my American pals had a great long weekend!

Posted by Phaedra Kennedy at 10:03 AM

Congrats on your relay team finishing 3rd on Sunday, awesome. Nice to finally meet you IRL as well.

Your bookcases are so empty!!!

Great week of training, as usual! :)

I think I resemble your remarks (race, recover, repeat). so excited to hear your thoughts on Xterra. I've always said I'm too chicken to MTB but then I just went out and bought a MTB (so I could do a local MTB race with my son). I'm considering Xterra Syracuse in August (which would require a change of race schedule).