When I started this blog oh so long ago, I posted a lot about what I ate.  That's why you'll see a recipes tab.  I used to share some of my favourite creations.  Over the last two years, in particular this past year, my normally healthy eating habits fell by the wayside.  I became too busy and too tired to put the effort into properly fuelling my body.  Of course, I gained weight, despite the same level of training volume as the previous year.  I'm chalking some of that up to changes in my hormones (there will be a whole separate post on that fun!) but I suspect that most it was due to poor food choices and not lifting regularly.  I know when I ate "clean" and lifted 2-3 times a week, maintaining my weight was easy.  Hormonal fluctuations didn't dramatically alter my physique either.

Once the insanity of the holidays ended, I was determined to get back to regular meal prepping.  I was somewhat successful at that over the month of January and G and I sort of got back on track.  What really kicked me in the pants was after G's annual checkup.  His cholesterol has been on the higher side for a while due to genetics.  Never to the point where it was dangerous, just that it had to be monitored.  Over the last 3 years it has steadily increased to the point where this year his doctor wanted to put him on medication to control it because it was much higher than it should be.   So G got his prescription and started taking the medication.  I think he lasted 3 days before he said screw this.  The medication gave him headaches and he generally felt pretty crappy.   He said he wanted to try to control it with diet.  So we started looking at what he ate.

His breakfast was normally some kind of flavoured yogurt with a store bought granola and berries.  Sounds fairly healthy right?  Not really.  Flavoured yogurt is filled with sugar as is store bought granola.  He used to eat oatmeal all the time so we've gotten him back on that and he adds berries and maple syrup to it.  He still likes some crunch on it so he still buys store bought granola but doesn't use that much.  I made some granola before we left for Florida and that got eaten up in less than a week.  So I plan on making some more of that and doubling the recipe.  Eliminating dairy should be very helpful for him.  I've got him drinking cashew milk in his smoothies and we've found a coffee place here that does the best almond milk cappuccinos.  That being said, both of us still use dairy in our coffee.  I haven't been able wean myself off of cream in my coffee and he likes milk in his.  I'm trying to find a substitute that offers that same creamy taste in my coffee that cream gives me.  So far, I haven't found anything that quite fits the bill.   The best thing would be to find a coffee that I like the taste of just black.  I've only had that happen once and it was at a wedding.  It was the most amazing cup of coffee I've ever had.  I get that it's an acquired taste but the coffee also has to be good for it to be enjoyable. I gave up sugar in my coffee about 3 months ago and haven't looked back on that!

The biggest change for us has been a significant reduction in our meat consumption.  I had been gradually reducing my consumption and turning to beans, legumes and soy products like tempeh.  G was the big meat eater.  Normally his lunch would consist of a couple of sandwiches with some kind of sandwich meat and cheese.  Processed meat has become a no-no as has red meat so now he'll grill a bunch of chicken breasts and have them in either a wrap with some mustard and tomatoes or he'll put them in a salad.   I'm trying to wean him off meat altogether but I'm not sure that will happen.  When he's left to his own devices, he will always choose an animal protein over a legume or plant protein because it requires little effort to prepare on his part:  salt, pepper, fire = done.   We'll see if that is enough to help keep his cholesterol in check.  I'm a bit more adventurous in terms of what I'll eat so I will happily cook up some marinated tempeh and put that in a salad or sandwich.

I'm looking at alternate ways of getting protein into our diets without consuming meat or seafood.  G is allergic to shellfish to we don't eat that at home.  We do eat fish, at least once a week.  The rest of the week I'm turning to grains, beans and other vegan products.  Thankfully the inter webs is chock full of great resources.  I'm also not opposed to winging it like I did last night. 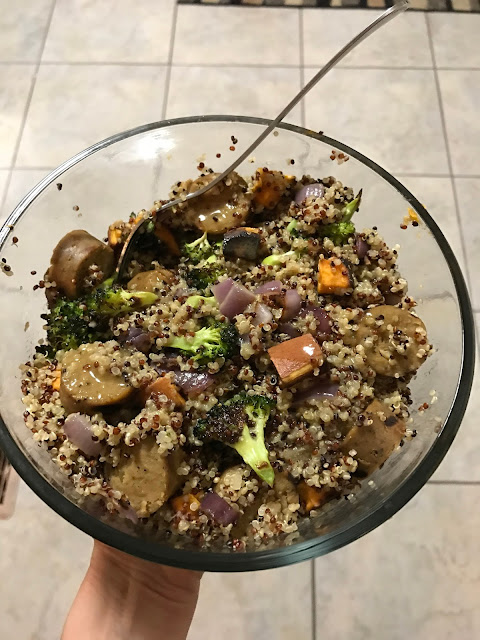 This was roasted sweet potatoes, roasted broccoli (SO GOOD) and roasted red onions, with quinoa, and grilled Fieldroast Smoked apple sausages and a maple dijon dressing that I made up.  I will make it again and post the recipe for those that are interested.  It was DELICIOUS if I do say so myself!

Another go to that I love to make is this noodle salad with peanut sauce.    You can add as many different types of veggies to this as you want.  My typical go to:  red and yellow peppers, match stick carrots, cucumber, edamame, green onions and cilantro. 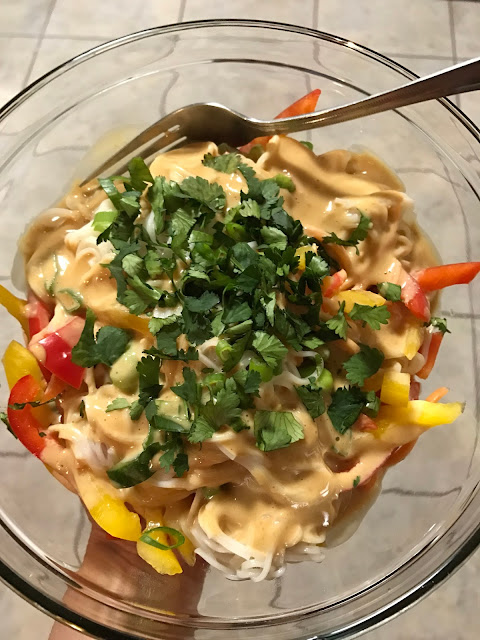 For breakfast, I will alternate between oatmeal with some quinoa or buckwheat mixed in for added protein.  Or, I will make a chocolate peanut butter chia pudding.  It looks disgusting but it tastes so good.  My fave oatmeal combo is peanut butter and banana.  I think I've gone through 2 jars of peanut butter since we've been here and I'm almost done my third! (that's roughly a jar a week - you could say I have a bit of a problem, ha ha). 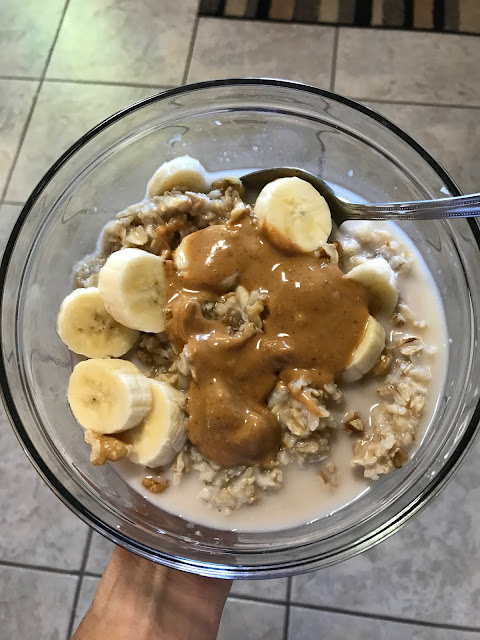 There are several things I've noticed since changing changing my diet.

1) I don't experience an afternoon crash any more.  My energy level is consistent throughout the day.  I'm also eating 3-4 large meals a day vs. having mid morning and mid afternoon snacks and I think that has helped as well because when I get hungry, my energy wanes a bit so eat something to bring it back up.  Now I just make sure I eat a bit of a larger meal and I find that it keeps me satisfied for at least 4 hours until I'm ready to eat again.

2) My skin is much better.  Not that I had bad skin to begin with but usually once a month without fail, I'd get some kind of nasty cystic acne around my jawline and forehead.  Now, I may get one or two minor bumps but they're gone in a day or two.

3)  My PMS symptoms, specifically bloating, seem to be less severe.  That alone is enough to keep me eating this way.

G goes back to his doctor in May so we'll see if this change in diet has helped his cholesterol levels.  I'm hoping it does.   If not, I think we may engage the help of a registered dietician.

Have you made any dietary changes due to health issues?  If so, what were they?

Posted by Phaedra Kennedy at 9:04 AM