I've had a few people message me asking me how I'm doing, what did the Doc say, etc.  Well, the ultrasound showed NOTHING.  Nada.  Zilch.  That's not to say that there isn't anything there.  Dr. Galea said he thinks something is there, we just have to find it.  So, I'm now going for an MRI.  He suspects that there might be some nerve entrapment happening.  How did that happen?  That's a good question.  My chiro thinks that I may have torn something and then scar tissue started to form and trapped the nerve thus the pain I was feeling when I was running.  I am a bit surprised that I don't feel it on the bike as well but I'm not taking any impact when I'm riding so that's probably one of the reasons.  If it is nerve entrapment then I'm looking at a nerve blocker and a PRP injection.  Hopefully that will help.  I'm going to see my chiro this week for some more ART as I think that there is still a fair bit of scar tissue around.  My RMT commented on how "crunchy" that area was so I figured it wouldn't hurt to address that.

Life has been incredibly busy these last couple of weeks.  Work has been ridiculous but, the big news is we've put our house up on the market, finally!  Our real estate agent said that it would be best to do it while we were away so we had a mad scramble to try and get it ready for showing this weekend.  Along with packing for a vacation.  This past week was pretty darn stressful.  I had sworn up and down that I didn't want to deal with this stuff before we went to Tremblant but once I got injured, it just seemed to happen.  And really, when they're showing the house, it's not really yours.  You have to make the bed every day, you have to hide your laundry and you can't leave anything on the kitchen counters.   Meh.  That's no way to live, ha ha.  We will be accepting offers when we're back on Wednesday so fingers crossed it sells!

As happy as I am to be on vacation, being here in Tremblant amidst all the hype that is Ironman 70.3, I'd be lying if I said I was ok.   Saturday morning they had a sprint and an Olympic race and as I watched people race down the finishing chute, tears welled up in my eyes.  Not racing yesterday was  really hard.  There were more tears shed at the start when I handed in my timing chip as well as after the race was done.   Listening to everyone talk about their race was tough.  I was happy for all my friends, everyone seemed to have a great day.  Inside, I was heartbroken.  I wanted to out be out there gutting it out.  I had such high hopes for this race.   I put my goals out there and I never got the chance to realize them.  It sucks.   I don't even know that I'll race at all this season.  I'm feeling pretty shitty.   I can't complain about the view though.... 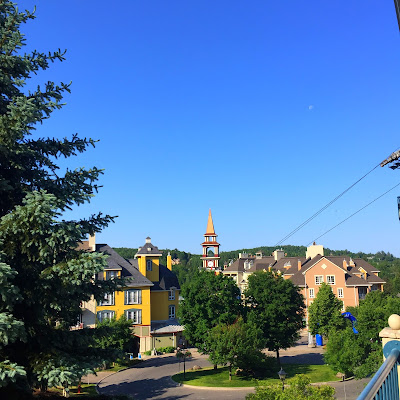 It's been 10 weeks since I've run any sort of distance.  I managed to run 3.5km on Saturday and that was my first run in 24 days.  I went slow and I didn't really notice the pain until I tried to pick up the pace a bit so I suppose that is a plus.  I will try to run again later on this week and see how that goes.   I think it's too early to say that I'm on my way back.  There are too many other aches and pains in this body to say that I feel good.  I don't.  I think this issue is affecting other areas of my body, my back in particular.   In fact, I'm pretty sure they're probably connected.  So we'll see how things go moving forward.  I do know that I need to do a lot of work on my core and hip stability.  So in addition to getting better I will need to be diligent about the little things. 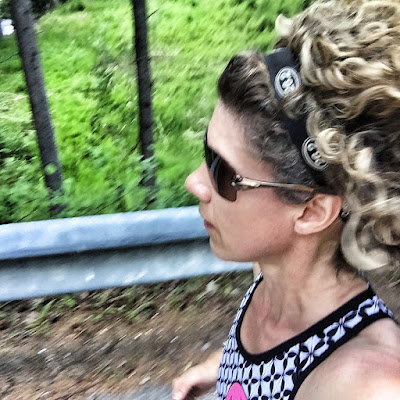 Despite the super busy last few weeks, I have managed to squeeze in a few workouts.  Most notably a 115km bike ride on one of the hottest days of the summer so far.  I rode with a Strava friend that I had only met once before.  Liz dragged my butt all around Kleinburg, through Hockley valley and up all the hills.  It was a tough ride but it was fun and I learned a few things about road riding.  I have to say, the internet has definitely expanded my training circle.   She's organizing a 120km group ride in July that I'm hoping I'll be able to do. 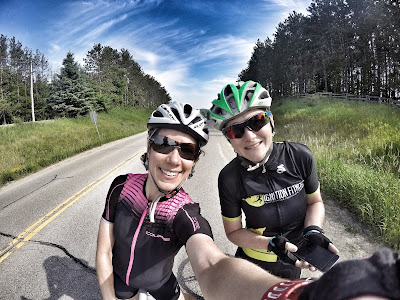 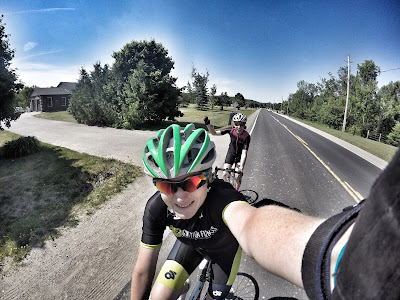 These last few weeks have been really hard emotionally but I think now that the race is behind me, I can mentally re-focus and really put the effort in to getting better.

I have so many things I've been working on physically and mentally that I want to share with you guys so I'll work on getting those things on to "paper" and getting them up here.

Happy Monday - hope everyone had a fantastic weekend!  Who raced this weekend?

Posted by Phaedra Kennedy at 9:05 AM