I was supposed to run the Robbie Burns 8km this weekend but after speaking with Lauren on Tuesday, that has been taken off the table.  Am I disappointed?  Not really.  If I wasn't rehabbing an injury then I would have used this as test of my current run fitness.  But, I haven't covered more than 6.6km in my last 5 weeks of rehab.  Could I run it?  Of course but I'm sure it would be ugly.  Would it be smart?  Heck no.  Lauren said that the stress it could potentially put on my body isn't worth it right now.  And I agree.  So I will keep plugging away at my plan and my rehab exercises.   Last night I ran 7x3 minutes so things are moving along.

In terms of progressing my rehab, I have now been tasked with practicing jumping off a step and landing softly and not letting my knees collapse when I land.  Not letting my knees collapse is difficult but not as difficult as landing softly.  I'm not very big but when I walk I sound like I'm 6ft, 200lbs.  Some people would say I walk with "purpose".  G says I don't walk as much as stomp (not having much carpet in the house really emphasizes this, haha).  I don't think I've ever been terribly light on my feet so I'm not surprised that my knees have suffered.  I'm really enjoying this challenge because it really forces me to be aware of my feet as well as how the rest of my body moves.  It also gets me off my butt at work.  If it's not busy,  I'll go into the garage, get an apple box, take my shoes off and practice my landings.  My co-workers expect this sort of crazy stuff from me so no one is surprised, ha ha.

In case you're wondering what an apple box is....here you go.  We use them in the studio to prop things up. 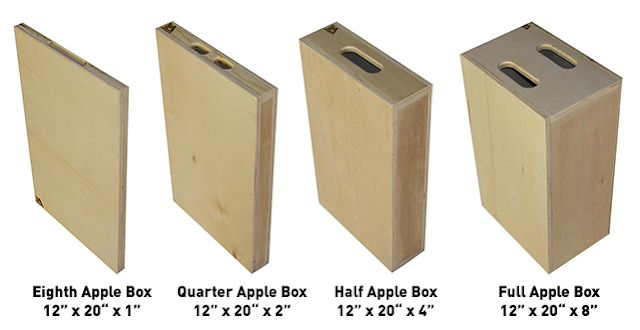 I've got a fairly quiet weekend on tap.  Of course there is the usual long ride & Masters swim and I'll be meeting with my trainer again.  This time I'll see him BEFORE my two hour ride.  Last week I ran, rode and THEN went to see him.  I was exhausted half way through my workout with him which is kind of a waste.  So he recommended that I see him first thing on Saturday and then do my ride.  So that's the plan.  We'll see how my legs like it, ha ha.  I'm hoping the ride helps alleviate some of the post workout soreness.

It feels really nice to be back into a workout groove.  And I like seeing the green workout box in Training Peaks (that means my workout was completed, haha).  I'm a very goal oriented person so I look at each of those green boxes as a building block or stepping stone to my goal.  Speaking of goals, I LOVE the new feature on Strava that allows you to set weekly and yearly goals.  They've FINALLY added swimming in as a weekly / yearly thing you can set goals in.  I went out on a limb and set distance goals for each discipline for the year.  I will probably re-evaluate them mid season depending on how things go.  Right now these are my goals for the year:

Swim:  300,000 m.  Right now I'm 6,000m ahead of target but I know come the summer time my swim time will drop because we lose our Sunday Masters swim.  We usually try to make that up with an open water swim on Saturdays but I never swim that far in open water.  Maybe that will change this year.  Masters Canada has a Million Meter challenge and right now I'm at 953,000m so I've got less than 50,000m left before I get my Million Meter pin and swim cap.  With the amount of time I've been spending in the pool, I should have that by March!  Woohoo!

Bike:  6500km.  Last year I rode 4700km so this is a big jump.  I figured we're going to a training camp for a week so we'll get a lot of riding in then and I know G and I will do some longer distance late season rides.  Plus, I'm sure Paolina will pile on the miles once I start riding outside.  Right now I'm 120km behind target but I'm not too concerned about that just yet.

Run:  1250m.  Last year I logged just under 1000km (980 to be exact) which is the lowest mileage I've logged in a very long time.  Now that my running is on the up and up, I think that this is doable.  I'm currently right on target and I haven't even been cleared to start building my mileage yet!

So, those are the mileage plans for 2016.  We'll see how all that actually pans out at the end of the year.

Do you set mileage goals for the year?  What have you got planned for the weekend?

Posted by Phaedra Kennedy at 11:44 AM