It Got Ugly Out There: Eagleman 70.3 Race Report

I didn't really have a goal going into this race.  Especially given the fact that we signed up for it 9 weeks out.  That's not to say that I hadn't been training because I had.  At least swimming and biking.   Running had taken a bit of a back seat in terms of longer distances.  I figured 9 weeks would be enough time to build my mileage up.  Looking at the Eagleman course, it looks deceptively easy because it's pancake flat.   A flat course usually means windy which the course description on Ironman.com verifies.  I had heard from other people that it could also be hot.  Ironman.com said that the temps were usually around 75-80 degrees F.  Ok that's a bit warmer than Toronto in June but not by much.  I figured both G and I could potentially have really good races.  I thought I might even be able to break 5 hours.  Until I joined the Eagleman Facebook group and got the inside scoop on exactly what Eagleman could be like.
Joining that group was a blessing and a bit of curse. It was great because you got to interact with people and virtually meet other participants before the race. My Tri Talk Tuesday co-host Cynthia was the mastermind behind it.  It created a wonderful little community and actually made me really excited for the race. There were a lot of locals and past participants that were able to shed some light on the course - most notably the swim and the ever changing weather and water temperatures. Going into this race, I didn't realize that the water was brackish-I thought we were swimming in a river so it had to be fresh water.  WRONG. Had I actually looked at a map I would have realized that the Choptank flows into Chesapeake Bay which then mixes with the Atlantic Ocean. AHHHH.  This was freak out number one for me. People mentioned jellyfish in the swim and I just about had a heart attack.  I had been stung by jellyfish before and it left me with some seriously uncomfortable welts on my arms. That was the last thing I wanted to deal with in a half Ironman. Then there was also mention of sting rays. GEEZ.  I was questioning my sanity in signing up for this race even before toeing the line. Someone in the group had put up a link to a buoy that monitored water temp and as the race got closer, I checked it every day.  A week before the race it was sitting at 69 degrees F which meant it would be wetsuit legal.  But temps were on the rise and people in the group were saying that we should be prepared for a non wetsuit swim.  Every time I thought about that I could feel my anxiety start to rise.  So I chose not to think about it.
G and I had originally planned on heading out early Friday morning but decided to leave Thursday evening instead to break up the drive. Thankfully we did because the trip down was longer than we expected. We made it to Erie, PA and spent the night there. We hit the road on Friday morning at around 7:30 am. By the time we got through PA, the temps had risen a lot. It was just over 30 degrees Celsius at 10:30 am. I could only imagine what it was going to be like the further south we got. We opted to drive with the top down of course.

By the time we got into DC the temps had become unbearable. We actually pulled over and put the top up because it was so hot. It's not every day that you see 45 degrees Celsius! 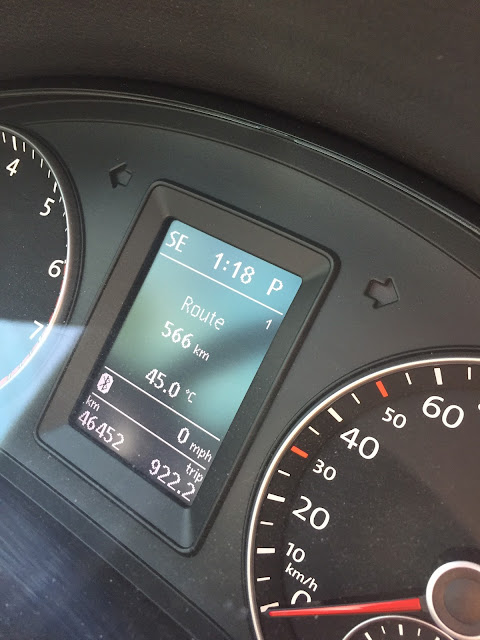 By the time we arrived in Cambridge it was about 4:30 pm and it was still scorching out.  I knew that didn't bode well for the water temps being wetsuit legal.  We checked into The Hyatt then went right back out to the race expo to pick up our race kits and do some shopping. I didn't go too crazy this year. I didn't find the gear as nice as what they had in Luxembourg. I still picked up a few things though. I think that swim bike run beer dish towel was made especially for me, haha.

Saturday we did a short run and a short ride.  My knees hurt and my sciatica was still kinda there, although better than it had been.  I felt ok on the bike though so that was a plus. The plan for the rest of the day was to check our bikes in, check out the Choptank to test our swim skins out and then head to the 2:00pm athlete briefing.  After that we were supposed to then meet up with a bunch of the Eagleman facebook group members. We checked our bikes in and headed over to the water. We passed this young guy getting ready and I immediately recognized him. It was Aaron Reilly, the youngest group member - he had just graduated from high school.   I have him to thank for the title of this race report.   One of his favourite hashtags was #LetsGetUglyOutThere.  Of course, I stopped to say hello and we started chatting. He was getting ready to swim so we said we'd join him. I happened to look up and saw another familiar face, who also recognized me - it was Doug, aka Tri Silk.  He came over and said hello and we all chatted for a bit.  He had just finished swimming and was heading off with his buddies. So, G, Aaron and myself suited up and got in the water. It was a little cool at first but once I got going, it was quite nice.  And it was actually somewhat buoyant. I could taste a bit of salt in it but it wasn't bad. Not like the ocean. I was still apprehensive about the non wetsuit swim but there was nothing I could do about that at this point. After the swim we met Aaron's parents, who were absolutely lovely. Of course there was a photo op! 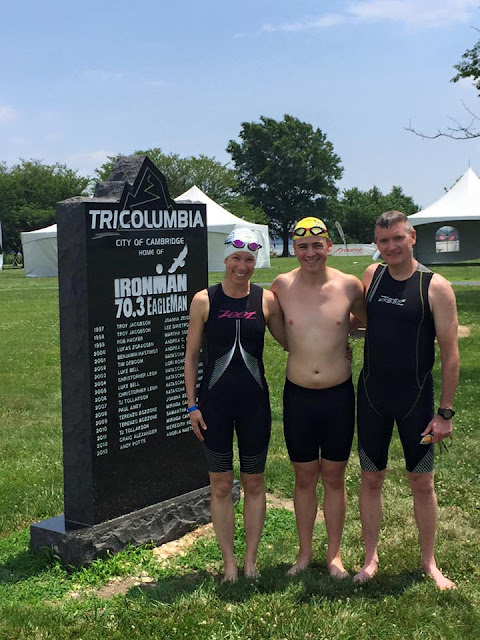 After the swim we went back to the expo for the athletes briefing. There we met up with a few of the folks in the Eagleman group and I finally got to meet Cynthia. Her dad was there as was her daughter. It was awesome to finally meet her in person. After the briefing we stood around chatting about racing and triathlons in general for a bit and then we all parted ways. G and I went back to the hotel and got everything ready for the morning. We headed off for dinner and were back in our room by 7:00pm.  I finished up my last minute packing and snapped this Instagram pic. Now all I had to do was sleep. Which didn't really happen.

Apparently the weather that day was 35 degrees with 99% humidity which made it feel like over 40 degrees. I don't think many people were prepared for that except for some of the locals. Amazingly I ended up in 11th place in my AG. Most of the women ahead of me were from Maryland or surrounding area. With the exception of one who was from Spain. I'll happily take it.
Next up is Muskoka 70.3 as the runner in a relay team. Looking forward to that.
Posted by Phaedra Kennedy at 6:47 AM

Great race recap, Phaedra. Isn’t it interesting how courses that appear on the “easier” side on paper are actually deceivingly difficult? I thought I would have an epic race going into Boise 70.3 because the course is relatively flat, but the wind and heat were factors I did not take into consideration. It can definitely be humbling. Sounds like you gave it your all and had a solid race, given the conditions. The swim alone would probably mentally destroy me – I’m not sure how I would handle a swim without a wetsuit. And jellyfish – what?!?! The run in the heat just sounded brutal. I remember doing a half marathon once in temperatures of 90-95 F and all I could think was “get me to the next aid station for more ice.”

Looking forward to your next adventure.

Fantastic Phaedra! Terrific report from one tough athlete. Thanks for the fuel and hydration tips. See you at Muskoka 70.3!

Wow, amazing job. This heat is killer. I cannot even imagine.

Tough race! I just had a tough one at Mont Tremblant, although it wasn't that hot. Tell me more about this salt...I have to figure out how to deal with tummy issues on the 70.3 run.

Good to see you even if we didn't connect after! My other friend was about 10 minutes behind you so I didn't want to leave the finish area till he crossed.

Major props to you for racing in those conditions. It was brutal out there but you made it look easy!