This race wasn't on my radar at all for this year but then again, nothing really has been until recently.  I just decide to sign up for things.  At the time it seems like a good idea.  Come race day, not so much.  This race was much like that.  G opted to sign up for it and use his free race entry from working the WTP Scotia aid station.  I opted to use mine for the Scotia half but decided if G was going to do this then I might as well join him.  Running races aren't his thing.  He's a triathlete through and through.  But, it was a free entry and the race is close to home so he figured why not.

The last time I ran this race was in 2011.  That day I ran 8km BEFORE the start of the race.  In fact, I think I actually ran from our house to the start of the race in High Park.  Since I'm working on building up my mileage, I figured I'd do something similar this time.  I had ridden 50km outside the day before so my legs were feeling a bit tired.  I didn't want to go into the race with 8km in my legs already so I got G to drop me off about 4km out from the park and I ran in.  I managed to add another km running to and from the car for a total of 5km.  I was definitely warmed up.

We made our way over to the red corral and I saw a few familiar Instagram faces as well as some of my WTP crew.  I kissed G good luck and made my way up towards the front.  I situated myself a few rows back.  I was joined by one of my fellow WTP ladies, Nancy Catton.  We chatted for a bit, both kind of regretting our decision to race because we knew we were in for some serious hurt.  I for one wasn't ready for the hills in this race.  I've done ZERO hill work and ZERO speed work.  But I was there and I wasn't going to let my lack of quality training stop me from giving my all.

The gun went off and I crossed the start line a few seconds later.  It was virtually impossible to not get swept up in the crowd.  I tried to tell myself to ease up but that didn't happen.  I hit the first km in 3:55.  I had to slow down or I was seriously going to pay for that.  I consciously tried to ease up a bit.  We were heading down Spring Road and I didn't let my legs fly on the downhill.  I tried to run controlled down that hill.  My Garmin beeped just as I hit the 2km mark and I looked down to see 4:10.  That was better.  I still felt like I was going too fast though.  My breathing was really labored.  When we got to the bottom of the hill I eased up some more.  People were passing me but I didn't care.  I didn't want to hammer through here.  I still had 6km to go and my legs already felt pretty crappy.  I was definitely feeling the previous days ride.

I slowed down a bit more and ran at a more comfortable pace.  I was still working but I wasn't gasping.  I hit the 3km mark in 4:25.  A little slower than I would have liked.  I clearly still had to find my rhythm.  I knew the next km would be slower because we were heading up Centre Road.  The first hill we had to climb.  I focused on the road ahead, trying to keep my shoulders back and lean into the hill a bit.  That seemed to work.  I passed a few people on my way up.  I still felt like hurling when I got to the top of that hill but I recovered quickly.  Up until this point, I hadn't seen any women ahead of me.  The ones that were, were long gone.  As I crested the top of the hill, I saw a woman a few meters ahead of me.  I remembered seeing her at the start because she had beautiful long curly hair and these crazy patterned running tights.  Anyway, she was just head of me.  As usual, that fired me up and I started to push the pace.  A dude came up beside me and went to pass me so I ducked in behind him to draft.  Wow, did that ever make a difference.  It was actually quite windy out.  I tucked in behind him and we passed her.  There was a slight rise in the road and the dude accelerated.  I couldn't go with him.  He took off like a shot.  I held my pace.  I caught up to him again shortly after we rounded the top loop and were heading down into the bottom of the park.  I couldn't believe we were already at the 5km mark.  I had picked up the pace again.  That km was 4:11.

The race leaves the top of the park and goes down this incredibly steep downhill on a path that takes you around the bottom end of the park.  The last time I ran that downhill a few weeks ago I tried to hold back and my quads were a bit sore the next day.  But that could have been because I ran 14km, which was my longest run to date this year, ha.  This time I didn't hold back at all.  I just let 'er rip.  I caught the dude who passed me as well as another woman.   She didn't want to let me get ahead of her so she hung on for a while.  We passed the 6km mark and made our way back into the park.  She was still hanging on.  We crested a small hill and hit the winding path that makes its way towards the main road.  I rounded the bend and surged a bit.  The next thing I knew she was gone.

Up ahead I saw Andrew Chak, blogger for IRunNation.  We had been chatting over instagram the day before about all the hills and all the hurt.  I saw him blow by me when we were heading down Spring Road in the early km's so I was a bit surprised to see him just up ahead.  Once again it was like a carrot on a stick.  A good analogy given he was wearing orange, ha ha.  I kept him in my sights and gradually gained on him.  We got out to the main road and I was right behind him.  I passed him just as we were heading up a small hill.  He said nice run Phaedra as I passed him and I said Thanks, you can watch me blow up on the big hill.  He laughed at that.  I started to push the pace a bit more.  I just wanted to be done.  I was hurting but I wasn't totally dying.  I think slowing down in those mid km's was the smart thing to do.  I knew that the last hill here was awful.  It's also a long slow slight uphill all along the path leading up to that hill.

I pushed along, catching people as I went.  As I got to the bottom of the hill I came up on Steve, one of my WTP crew mates.  I passed him and said good run.  I charged up the hill, by the Tribe Fitness group who were yelling and waving signs.  That was some great motivation for sure.  The hill was absolutely packed with people.  I got about half way up and I felt like I was going to die.  I heard someone coming and glanced to my left to see Andrew again, he ran with me for a bit and encouraged me to push and go with him and I choked out between gasps, Go on, this is all I've got right now.  I was wheezing I was breathing so hard.  He pulled ahead of me and I tucked in behind him and followed him up the hill.  The last time I ran this race, I'm pretty sure the finish line was much farther away.  The Run CRS folks must have developed a soft spot for runners and moved the finish line closer to the top of the hill because as soon as I crested the hill and turned the corner, the finish line was right there. Thank Goodness.

I crossed the line right behind Andrew.  I looked down at my Garmin and saw 34:17.  Not a PR but a course PR by about 2.5 minutes.

We congratulated each other on a great race, he went off to get some water and I waited for G.  As I was waiting, a bunch of WTP folks came in.  Steve finished right behind me, then Pete rolled in.  Then G, followed by Nancy, Wanda & Ken.  So of course it was time for a group shot. 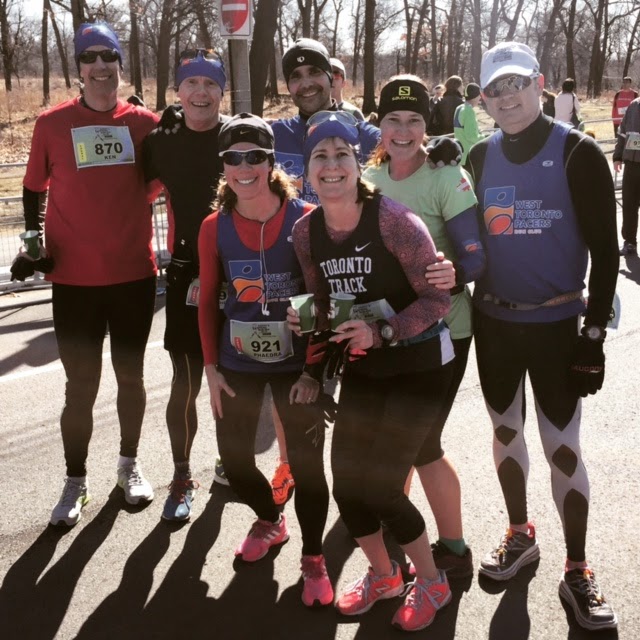 We milled about for a bit and then wandered off to get some food and check the results.  I looked up my name and saw a 4 beside it.  No podium.  Then I looked up the overall winners and saw that the second place woman over all was in my AG.  And just like that, I was back on the podium.  SWEET. 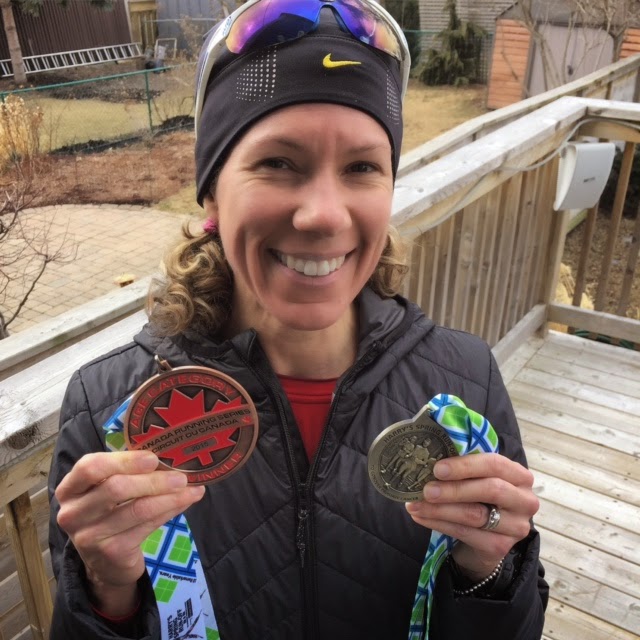 Next up is the Mississauga 10km.  I think it's high time I added some weekly speed work into my mileage.  I have a score to settle at that race and I want to knock it out of the park.

Now it's time for me to get on the bike and spin out the soreness in my legs.  Then it's off to Bolton for Easter celebrations with the entire family.  Can't wait!

Happy Easter!  How are you celebrating today?

Congrats on a great race!!!!

Woohoo for the podium!

Congrats on your great race! I knew you'd end up with more than one medal! You really know how to pull it all together and push as hard as possible when it counts. Can you please bottle some of that?