Random Thoughts on Saddle Shopping: It's Surprisingly A Lot Like Dating...

If you hang out with female triathletes long enough, you will eventually be subjected to various complaints about sore crotch areas, chafing and other things that most male triathletes don't really want to hear about.  I had this exact discussion with a male friend of mine last week who said that men had more to worry about because all their bits were external.  My argument was that women's external bits were just as sensitive, probably even more so due to the variety of "layers" women have.  Ahem.  All this was spurred on by a tube of chamois cream, ha ha.

Of course many of these issues can be tempered with the right saddle, a proper fitting pair of shorts and some good chamois cream.   Shorts can be a tough one but I found that for me, finding the right saddle was even more challenging.   If I was to guess, I'd say that 90% of the time the saddle that comes on your bike is NOT going to be the one that you stick with.

After spending fair bit of last year's off season testing out saddles, I've come to realize that finding the right saddle is much like finding Mr. Right.  It can be a long and sometimes frustrating quest.  Just like with dating, I'm sure you'll find your fair share of duds.  Then there might be a couple that make you think "Hmm...maybe this is it".  You test the waters for a while,  and eventually you realize that something just isn't right.  You learn what you like and what you don't as you go along.  The right saddle, much like Mr. Right, should be something you're comfortable with,  it shouldn't irritate you or rub you the wrong way and you shouldn't mind having it stuck between your legs for hours at a time.  You're going to have to test out several models but trust me when I say you'll know when you find The One.  There is a warm fuzzy feeling that takes over your body and you actually look forward to going for a ride.  You can't wait to get on your bike.  You think about riding all the time.  The thought of it may even give you butterflies.   Yes ladies, this can happen to you too.  It will require a bit of time, effort and research but it's worth it.  Thankfully there are more options now than there were 10 years ago when I started in the sport.

For years, I just dealt with the discomfort, mainly because there weren't many saddle options around for women and the ones that were available weren't great.  They were clearly designed by men that really didn't get the intricacies of the female body.   I did 2 Ironmans on saddles that were less than ideal.  Somehow I managed to suck it up and ride but it wasn't terribly pleasant.  I do think that it affected my performance to a certain extent.  I didn't use my aero bars to their full advantage because I wasn't comfortable in that position for extended periods of time.  What's the point of riding a triathlon specific bike if you're going to spend most of your time out of your aero bars?  Might as well ride a road bike.

So how do you find that elusive Crown for your Queen?   That oh so desirable Mr. Right?

My two cents?  Start with John Cobb.  This article explained SO much.  You've gotta love a man that tells you to "Go look at your crotch and make the call".   He has essentially classified women's genitalia in two categories:  an "innie" and an "outie".   The difference should be pretty self explanatory.   Outies have a bit more "business" going on and "innies" don't have much in comparison.   Outies are going to need more in terms of soft tissue pressure relief vs. an innie so a saddle that works for an outie, probably won't work for an innie.  Then I suggest trying out some of his saddles.  He has several models for both types of women.  These were a couple that I tried. 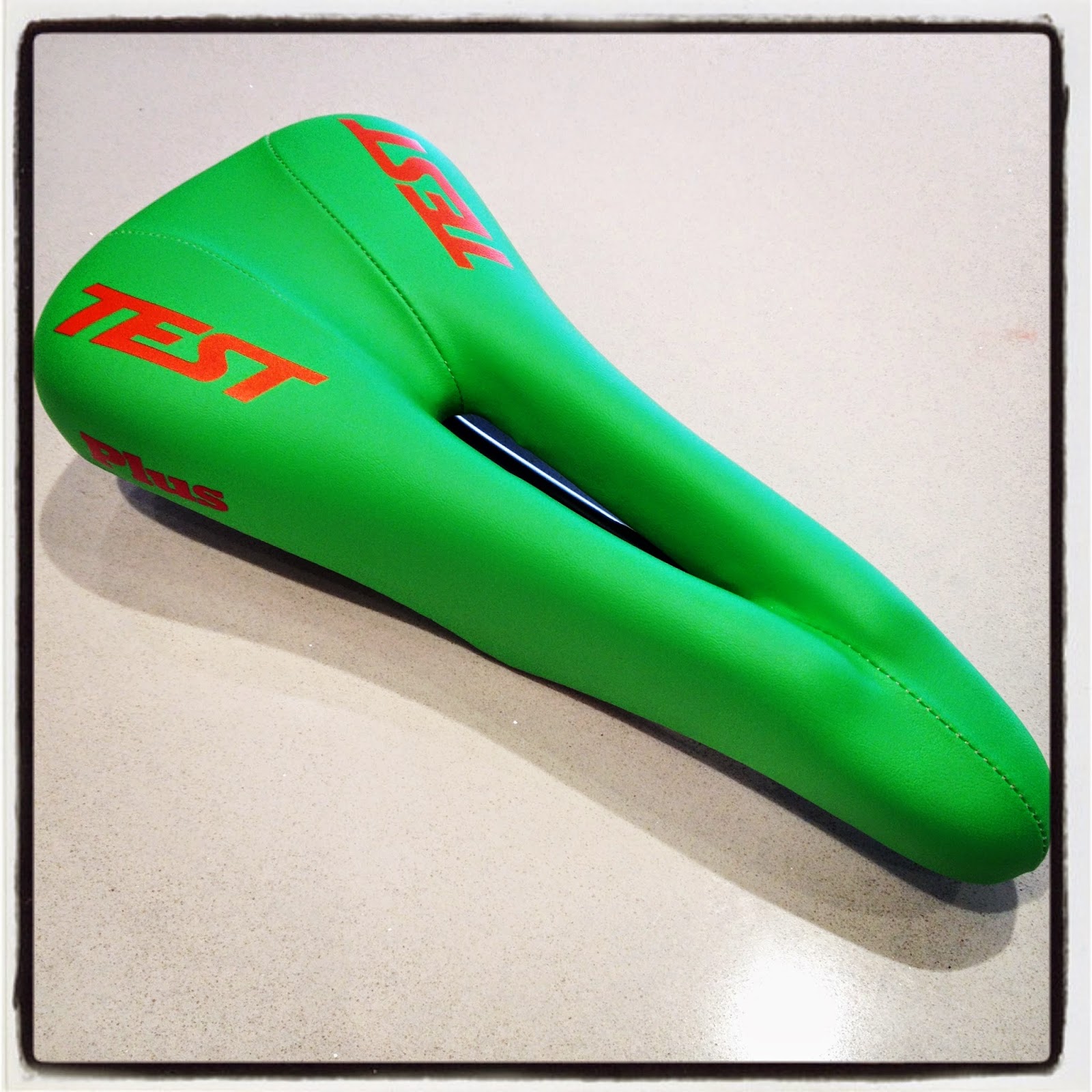 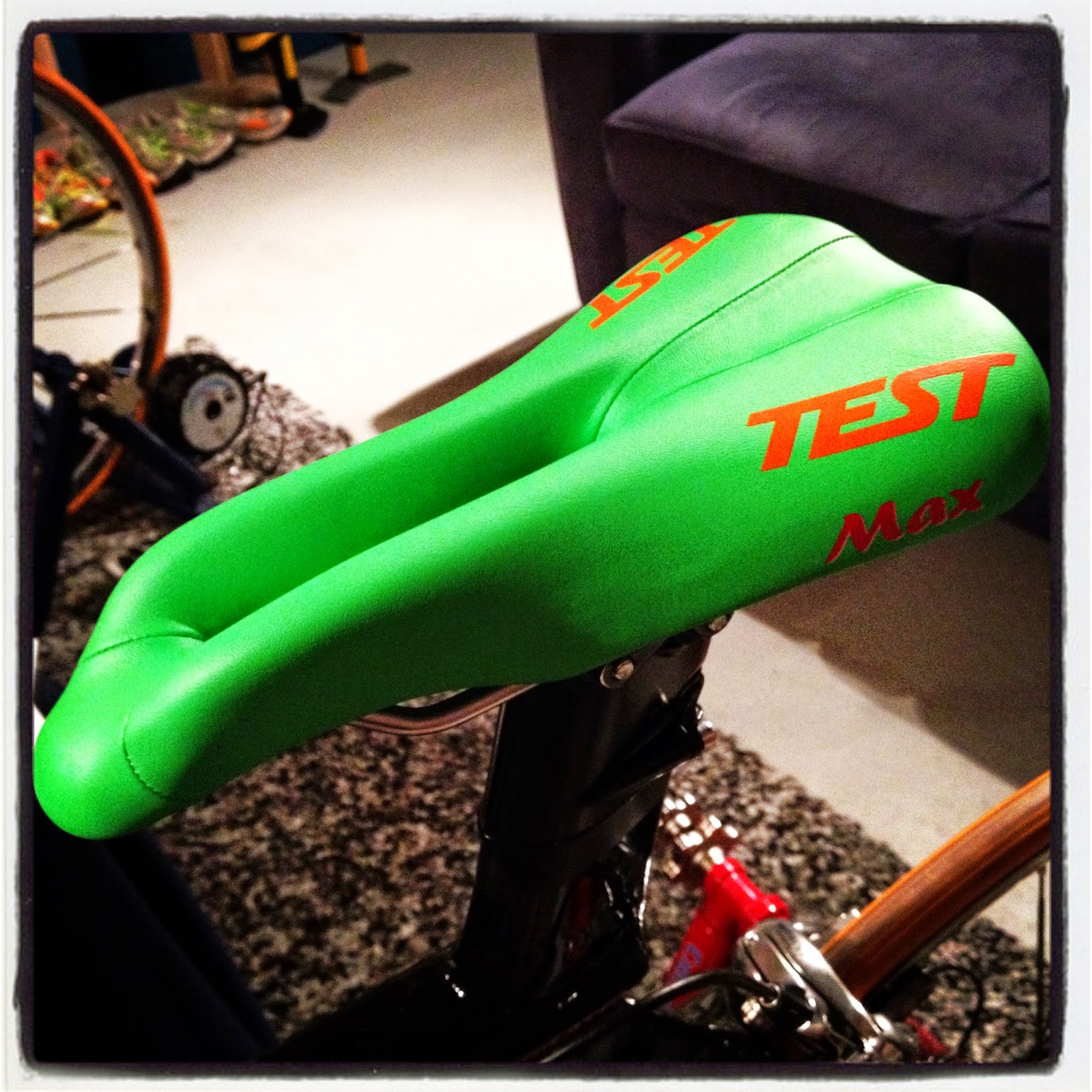 If you think about it, finding that perfect saddle really is a lot like dating.   Pick one that looks "suitable" and take it for a test spin.  Sometimes you'll know right away that it won't work.  Sometimes you'll have to test it out multiple times to really get a feel for it.  Most good bike shops will have test saddles that you can take for up to a month.  That means you're going to have to ride a few times a week to get a feel for whether or not it's the right one for you.  Practice makes perfect.  I suggest riding on the trainer as well as outside if possible.  The trainer is less forgiving because you're not really moving.  If you can survive for an hour on the trainer without any unusual discomfort then you have a keeper.  I say unusual because really, how often do you have something wedged between your legs for hours at a time? (No need to answer that, ha)  Of course there will be a general soreness from sitting on something that long.  I'm talking about hot spots, chafing and pressure in all the wrong places.  If you're feeling any of those things then you might need to move along and start looking for a different model.

The aha moment for me was when I got through a 90 minute trainer ride without having to move around on the saddle to find a comfortable spot.  I got on, situated myself, dropped into my aerobars and started riding.  That was it.  That's when I knew I found the one.  Angels started singing and my life in the saddle hasn't been the same since.   I think I even did a little happy dance.

Now if only I could find the perfect pair of shorts, I may actually never get off my bike.

Speaking of cycling, tune in next Tuesday for our monthly edition of Tri Talk Tuesday - we're discussing how to improve on the bike!

Posted by Phaedra Kennedy at 6:00 AM

So glad you found a comfortable saddle! Non-cyclists don't understand how agonizing the search can be! While my husband has undergone the ideal seat search, insisting like your friend that men have more problems in this area, I have never needed to change the saddles on my bikes. My first bike came with a Selle Italia seat, my Felt B2 still has the felt seat that came with it. I only have problems if I forget the chamois cream for rides longer than 1.5 hours, other than that I've been lucky enough not to have any issues. Happy riding!

I seriously need to look into a new saddle. I CANNOT get comfortable on my trainer for more than a few minutes without having to reposition myself. All that wiggling won't be good on the road