Patience Grasshopper: The Ongoing Saga Of My Knee Problems

Ok so maybe saga is a bit dramatic but geez man, this feels like it's been dragging on FOREVER.  I've officially been in physio for 3.5 months.  I know I was in rough shape but that kind of seems excessive.  I do think I probably would have been better off NOT running for the first few months of my re-hab process.  I might have progressed a bit faster.  I was warned at the outset that this would take a while.  And I was reminded of that again when I went for my MRI follow up last week.  If there's one thing I don't have a lot of when it comes to myself, is patience.  I want to go, go, go.  But I'm (slowly) learning that I can't always do that.

Last week I felt like I had regressed but I think I just did a little too much.  Thanks to the suggestion of super runner Sasha Gollish, I started keeping an injury journal.  Every day I note how my knees are feeling, what I've done, if I've done all my exercises or not, etc.  Looking back over the last 3.5 months, I've definitely made progress even if it doesn't always feel that way.   Looking at my training log over the last couple of weeks, I've definitely upped the running volume when I probably should have just kept it the same.   One step forward, two steps back.  Needless to say I've learned my lesson and will be re-adjusting my game plan as of this week.  It's going to take a bit of discipline on my part, especially when I'm feeling good.

So what exactly is wrong with my knees?  What did the MRI show?  Well, the doc only ordered the MRI for my left knee as that was the one that was really causing me problems.  I would have pain on extension so whenever I did a plank or push up or anything that required full extension in my leg, I'd have a sharp pinching sensation under my kneecap and along the side of my kneecap.  My chiro and the sports doc both suspected it was the fat pad around my knee that was being pinched because my patella (kneecap) wasn't tracking properly.   I'd also have pain at the outset of my runs and sometimes during my runs in both knees and I could literally feel that my kneecaps were not tracking properly.  They would eventually find their way into the right spot as I got warmed up but afterwards, man did they ever ache.  It hurt to walk up and down stairs.  Sometimes my left knee would buckle a bit when I was walking.   I was a mess.  And to think I trained and raced like that for all of last year.   That is the number one reason I decided to NOT commit to anything this year.   Shit had to get sorted!

The good news first.  All of my tendons and cartilage are intact.  I have no major damage.  YAY.   I was worried I might have done something to my meniscus but that is not the case.  The not so great news....the MRI found three different issues on my left knee and I suspect that a couple of them are also present on my right.

This essentially means that the cartilage under my patella has been worn and is slightly inflamed.  The fat pad is a soft tissue that lies beneath the patella that separates it from the femoral condyle (end of the thigh bone).  If your kneecap doesn't track properly, the fat pad can get irritated and inflamed.  My left leg hyper extends slightly so this can also be a contributing factor in fat pad impingement (which for some reason is also known as Hoffa's Syndrome).  Getting my kneecap back to tracking normally will help manage this pain.  The bonus?  At least it's only "mild".  I can't even imagine the pain I'd be in if it wasn't.


2) Mild tendinosis of the superior insertion of the patellar tendon.

This is the one that bothered me the most.  Tendinosis is never a good thing.  You have to be very careful with it or else it can get a whole lot worse.   My patellar tendon has thickened a bit, most likely due to irritation and having to work a whole lot harder because my kneecaps weren't tracking properly.   My physio doesn't think that tendinosis is the main problem and that this should get better as I progress in my re-hab.  The key is to not over do things.   Patience, grasshopper. 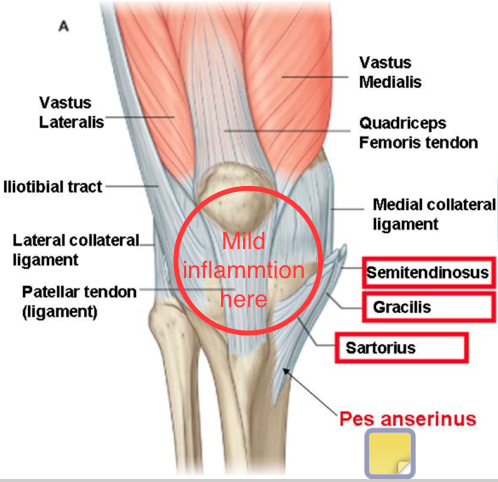 Sounds gross,  I know.  Apparently these are quite common.  I'm not surprised that I've got a cyst.  I've had them pretty much everywhere else on my body so why not behind my knee?  This one is very small and apparently they come and go.  They are usually the result of a joint issue (surprise!). I don't feel anything behind my knee so this must be pretty tiny.  Apparently they can get pretty big (cue gagging).

The prognois?  None of these things require surgery (yay).  All of them can be fixed with physical therapy...eventually.  Yup.  There is no timeline on rehabbing something like this (boo!).  I have to keep doing my exercises and be patient.  Just because I'm feeling good doesn't mean I can go out and run 11km.  Nope.  I have to slowly build into things.  I'm used to building at a certain rate while I'm training but with rehab that building process is much slower.  I haven't really bought into that until recently.  Sometimes it takes a while for things to sink into my brain.  I'm chalking it up to all that hair on my head.

On the positive side, at least I can still run.  I am going to have to be careful with my cycling and I may have to switch back to my road bike, we'll see.  I've been very careful not to overload my quads too much as it doesn't seem to take much to get them really tight.  Although I think that is about to change as my physio now wants me to start doing jump squats.  I was doing body weight squats a couple of times a week.  Now she wants me to progress to jump squats.  I did them last night with her and holy smokes were my quads ever burning.  Amazingly my knees feel fine this morning.  I fully expected them to hurt so I call that WINNING!

So, I need to be patient and I have to remember that progress is still progress, no matter how slow.   Right?

Posted by Phaedra Kennedy at 11:39 AM

Can't you get the Bakers cyst drained? At least that would be one less thing to annoy you...sorry about that tendinosis. Those chronic injuries are tough to overcome. Hang in there!

The cyst is so small I don't think it's necessary. I didn't even realize I had one! If it was bigger then perhaps that would have been an option.

Stay Positive Girlie!! You got this!!

At first when I saw the cyst in the picture, I thought "WHOA"!!! Thank goodness yours in not that big and bulging out of the back of your leg. I am so sorry to hear you have so many issues - all connected in some way. Hopefully with time and the proper treatment, all of this can be resolved. I know how frustrating it must be. Stick with it girl!!