WTP Does Niagara Falls: The 2014 #PhatAssChallenge

Not to be confused with Fat, which can be a noun, verb and an adjective.  This brings me to the origins of the #PhatAssChallenge.

The story goes that back in 2012 a few of the WTP Ladies got together to head to Philadelphia to run the Philadelphia Marathon.  Said ladies usually enjoy a good physical challenge and in their exploration of the city, decided it would be fun to race up the Rocky steps....because that's what you do when you're in Philly for the marathon.  Other than maybe eating a cheese steak or two.  Carb loading, you know.

You know where I'm going with this right?   Let's be real guys, that angle is NEVER flattering.

None of these women had an issue with this.  No, they took it and ran with it.  And that's how the #PhatAssChallenge was born.  So every fall, these ladies take a trip somewhere to run a race.  Last year, they went back to Philly again, this time with a bigger group.  And the addition of the LEGENDARY cat pants, which have now become a #PhatAssChallenge must.

This year, the WTP ladies put a vote out to the club with a few fall destination race options and Niagara Falls won out.  It was close and they offered 5, 10, half marathon and marathon options.  The proximity of the race brought a big turnout.  This year there were 31 people that came out to race or hang out.  Of course the highlight of the weekend was the #PhatAssChallenge.  Because it's not every day you see grown men wearing cat pants.

We all figured that the challenge would be something physical but the organizers and founders, Carm & Karen decided to dice things up a bit.  We had to assemble in the parking lot of our hotel, wearing cat pants (or similar) if we had them and we had to make sure we had a camera or smart phone.  This is part of the motley crew.  Most of us proudly wearing our WTP shirts I might add. 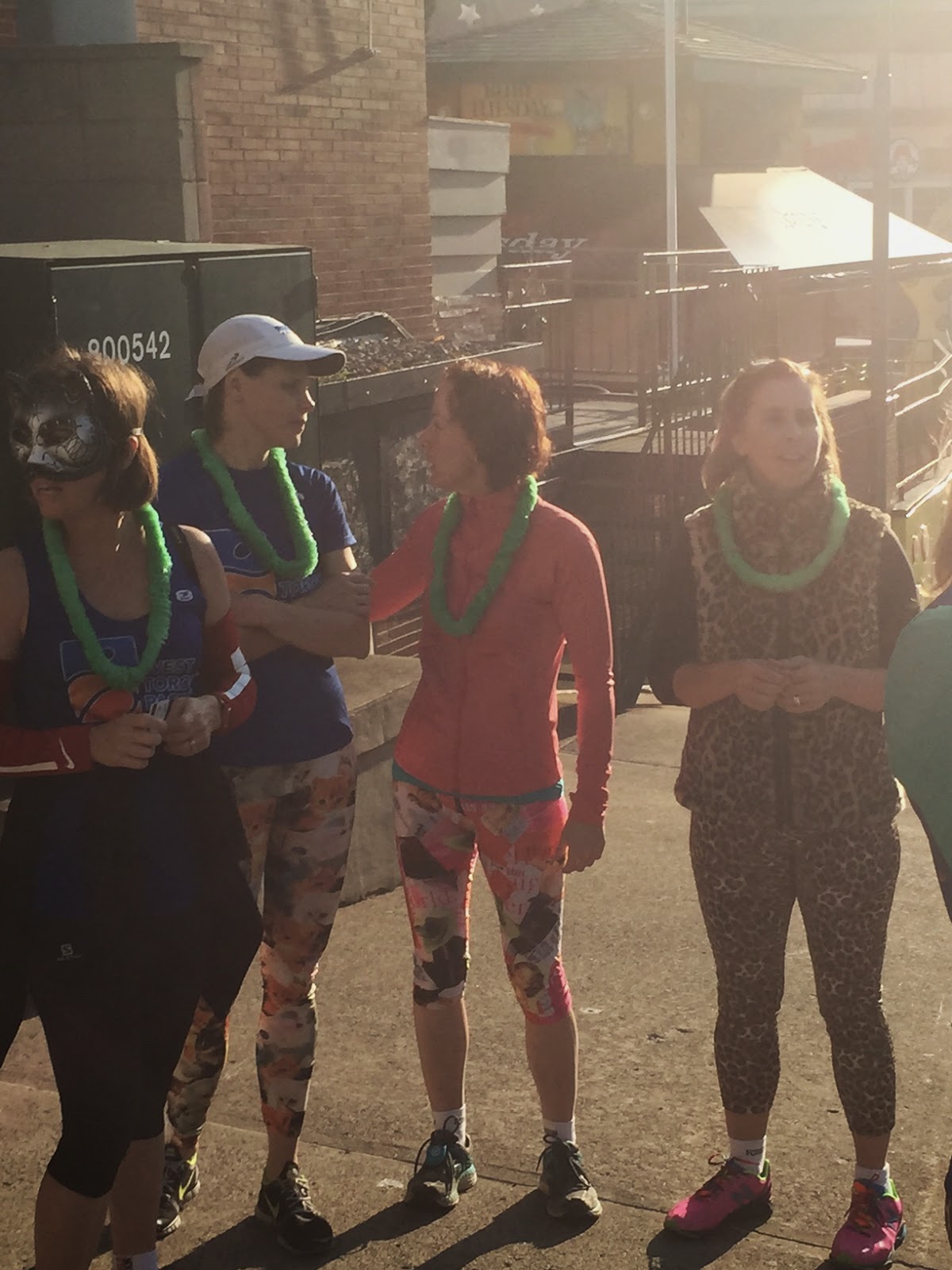 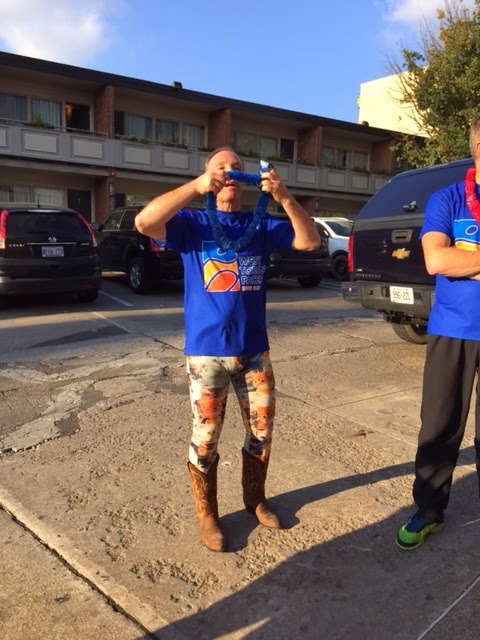 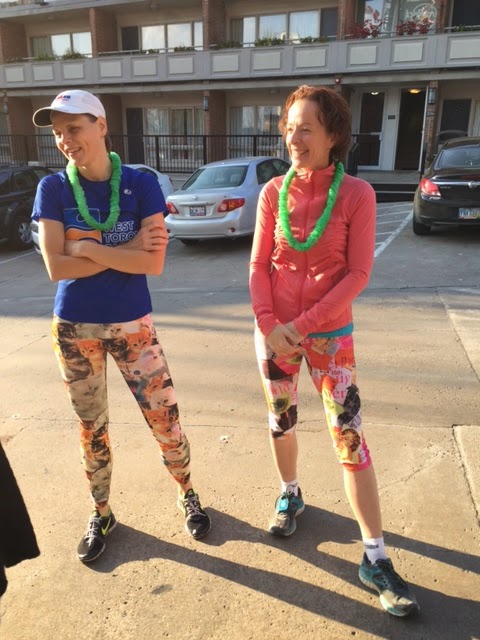 At shortly after 4:30 we were handed this and instructed to pull a lei out of a bag. 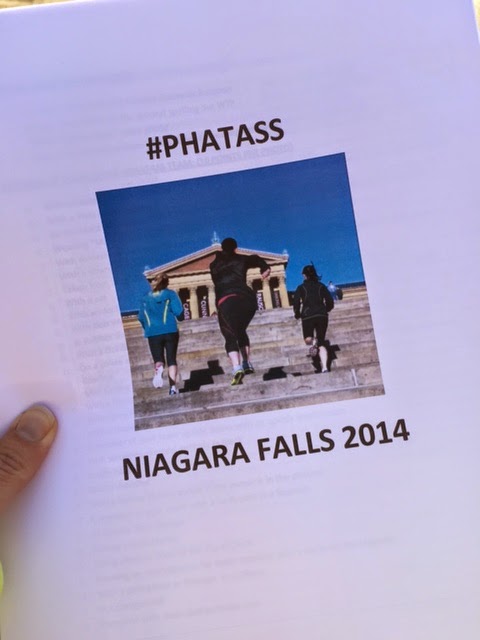 The colour of the lei determined the team you were on.  The ladies then walked us through the challenge.   It was a scavenger hunt of sorts.  The majority of things on the list were things we had to do as a group and get of picture of us doing it.  Nothing like running around Niagara Falls dressed in catpants or neon running attire, trying to get pictures of us doing stupid things.  So. Much.  FUN!  The tasks had different point values, some higher than others.  We also had the opportunity to find things and bring them back with us, as well as answer trivia questions.

Your entire #PhatAss Team with a stranger wearing catpants.  Which we did.  The rules didn't specify that the person had to already be wearing the catpants.   We managed to get not one but TWO people into Roger's catpants.

With someone dressed all in black: 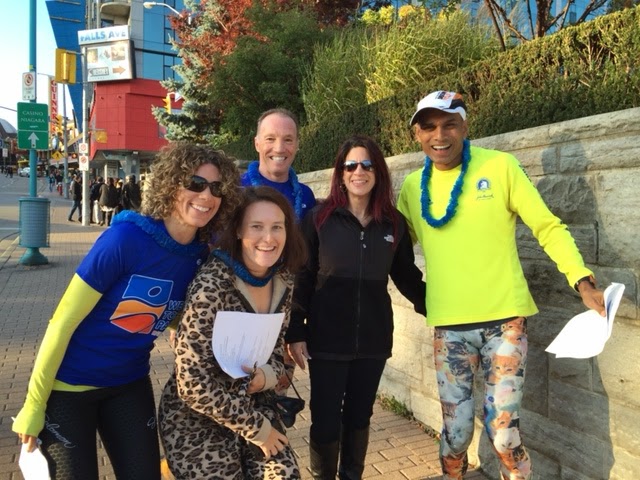 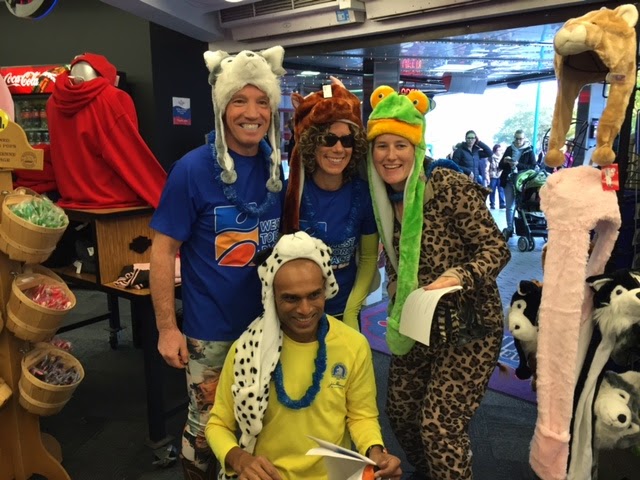 Running Up Stairs (bonus for team member who's ass looks the biggest).  I LOVE the cat on Al's butt (the guy beside me). 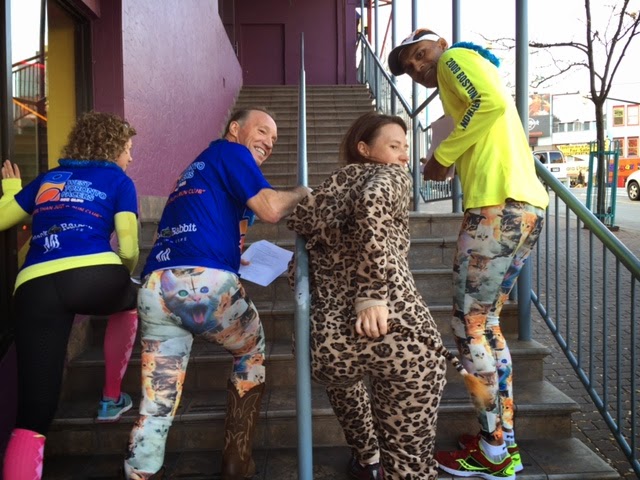 People lying down on the ground spelling out WTP.  I wouldn't say they nailed it....

With a policeman or fireman in uniform.  As you can see, pretty much ANYTHING went as long as it was kind of in the ballpark.  In case you're wondering, that's a moose dressed in a RCMP Uniform.

You get the picture, right?

Needless to say, people thought we were nuts and the boys definitely raised a lot of eyebrows in the catpants.  But man, oh man was it ever fun.  We're already trying to figure out where to go next year.

Have you ever done a scavenger hunt?   What's the craziest thing you've ever worn running?

Posted by Phaedra Kennedy at 6:31 AM

That looks like so much fun! And I'm super jealous of those cat pants. Where did you find those!?