Last week was C-R-A-Z-Y.   I really wanted to just lounge around on the couch all weekend but nooooo, that was not to be.  I had another busy weekend lined up.   I swear I think I'm busier now than when I was actually training.  Friday night I got home from work late, again.  That's been the story of my week.  Saturday I got up early and ran 12km!  YAY!  Then it was run errands, do some work, then get ourselves out to Richmond Hill for a family portrait.

Yesterday I was up early again to go and cheer on two of my athletes as well as a few virtual pals at the Hamilton Marathon.  Christina and Danielle were running their final half marathon of the season and since I couldn't make it last year, I figured no matter what, I was going out this year.  And we were going to hang out and go for food after so I wasn't about to turn that down, ha ha.   It was freezing cold but sunny at least.  I had a blast cheering folks on.  I had my trusty cowbells and was totally bundled up.  I saw Irina who was cheering her hubby on as well as Nicole, Sam and the rest of the Burlington ladies.  He came in at 1:30 on the nose.  I was keeping my eyes peeled for Christina.  I saw the 1:40 pace bunny.  No Christina.  2 minutes later there she was.  Cue the cowbells. loud cheering and lame dance moves.  As she ran by me she said "I'm so tired".   I knew Danielle couldn't be too far behind.  Lo and behold, a few minutes later, there she was.  More cowbell and loud cheering.  I glanced down at my phone and saw the time and thought Holy $#&T, she was going to PR!!   After everything she's been through this training cycle, she was going to PR.  I was so happy.  I ran like a crazy woman to the finish line to wait for her and as soon as I saw her I gave her a big hug.  She was pumped.  We then tracked down Christina and posed for pictures.   Because that's what you do post race, right?  If it's not on Instagram or Facebook, then it didn't happen.  Ha. 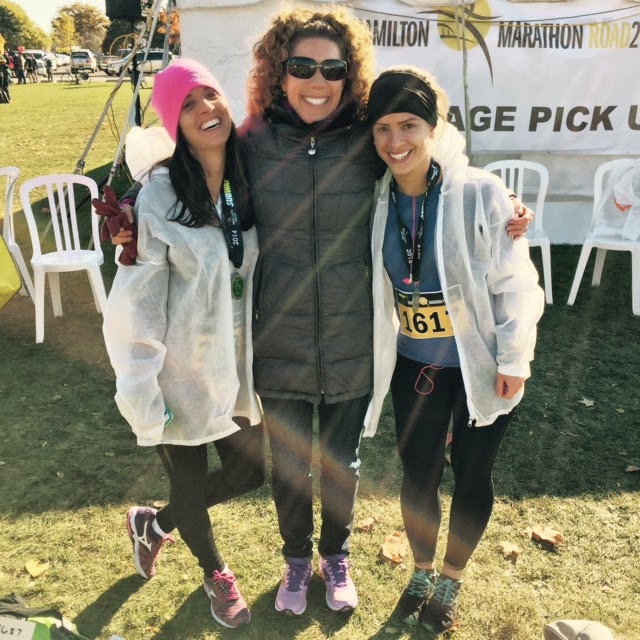 I also met Josh, Danielle's fiance as well as Jessica and Annie, who came all the way from Ottawa to race.  We all decided that food was in order and thanks to Jessica's awesome suggestion, we ended up at Naroma for pizza. Best.  Pizza.  Ever.

I had a very busy week work wise so I didn't get much in the way of workouts in.  BUT, I did have my first completely pain free day.  Yes, you read that correctly, NO PAIN.  None.  Nada.  And you know what?  I didn't got out and do anything stupid either!!!  I know.  Who am I??

Someone who is slowly learning, that's who.  :)

Anyway.  Let's check out my last week of workouts, shall we?

Monday:  2150m swim in a.m.  Pilates in p.m.
Tuesday:  75 minutes strength & mobility
Wednesday:  1900m super crappy swim in a.m.  6km easy run in p.m.
Thursday:  30 minute ride on computrainer + core and physio work
Friday:  was going to swim but......sleep won out.
Saturday:  12km run + new phsyio routine which is up to almost 30 minutes now.
Sunday:  Super spectator -spent a couple of hours in the cold in Hamilton cheering people on.   That has to count for something, right?

I'm kind of glad work is going to be nuts this week.  It will keep me from lacing up my shoes and running too much.  I'm hoping I can get out for one short easy run during the week and maybe, just maybe, I'll do another 12km on Saturday.  We'll see how my knees feel this week.

How was your weekend?


Posted by Phaedra Kennedy at 8:39 AM

THANK YOU again for coming out and cheering!! Seeing you bobbing up and down screaming like a maniac during my last two half marathons was honestly the best ever. It's more motivating than anyone can imagine! I had such a good time and cannot WAIT to see what you help me achieve in 2015!!!

Haha thanks for the shout out. It's always a pleasure to see you. Probs you need to know my lips always turn that horrifying shade of our please after races. My science major son tells me it's from lack of oxygen. Great work cheering on your peeps. I'm sure it meant a lot!

It was so nice to meet you! You are one heck of an athlete, and a stellar cheerleader to boot!

Thank you SO MUCH for coming!!! I still haven't had a chance to write my recap wahhh.

p.s. All I keep thinking is "I could've run faster."