Normally it never takes me this long to write a race report but life has been incredibly busy as of late that blogging has taken a bit of a back seat.  C'est la vie when you have an unpredictable full time job.

After Barrelman in September, I said I was done for the season.  I was taking a break.  My knees were a mess and I needed to rest and start working on fixing them.  And I did take a break.  I took a whole 19 days off running and cycling.  For a Type A like myself, that is a big freaking deal.  After the 19 days, my knees felt a fair bit better but the minute I pushed myself or maybe did a bit too much, they hurt again.  So I started going to physio.  I needed a routine to work on strengthening all my smaller stabilizing muscles that have pretty much been sleeping for the last couple of years.   The knee pain came and went.  Some days would be great and some days would totally suck.  But that's how rehab goes.  It's never a straight line.  I did what I could when my body would let me.  I managed one run a week, no more than 6km.  I rode my bike from time to time and I swam and lifted weights when I could.

My run group had been planning their fall trip to Niagara since the summer.  I had decided I was going to go regardless of whether or not I could race.  The closer we got to race weekend, the more I was getting the itch to do something.  Clearly I have a problem.  I contemplated doing the 10km but then figured I didn't want to suffer through that.  A 5km would be a bit more tolerable given my lack of speed and lower pain tolerance.  So a few days out from the trip, I signed up for the 5km.  The field was really small so I hoped that I'd be able to podium at least.

Saturday morning G and I rode 60km through Caledon, booked it back to Toronto, threw a bunch of stuff in a bag and drove out to Niagara so we could participate in the #PhatAssChallenge.  So glad we did that, what a blast.  The ride really did a number on my knees though and they were quite sore and running around Niagara for an hour didn't help things either.  My physio had taped them on Thursday and I was determined to keep the tape on until after the race on Sunday.

After the #PhatAssChallenge, the group of us went out to dinner at a local Italian place.  I even had a beer.  Normally I'd never do that the night before a race but it was a 5km and I was just racing it for fun.  I ate a whole lot of white bread and pasta.  Two things I don't normally eat but that's what was for dinner.  After dinner we wandered around the strip a bit then went back to the hotel.  I think I fell asleep sometime around 11 pm.  The hotel was providing us breakfast at 6:30 am so I got up at 6:00 got myself sorted and rolled over to the hotel restaurant for some coffee and blueberry Eggos (I kid you not).  I grabbed an apple and a banana for good measure.  G drove me out to the race start which was about 4km from the hotel.  Had my knees not been killing me, I might have considered running to the start as a warm up..it wouldn't be the first time I've done something like that.  But we drove and I ended up running circles around the parking lot for my warm up.

We parked in the same lot I parked at for Barrelman.  The run course was on part of the Barrelman course so I knew what to expect for most of it.  It was listed as an out and back but reading the course description, it didn't seem to be so there was a bit of confusion as to where it actually started and ended.   We followed the stream of runners making their way through the parking lot and found some fencing lining the road.  We saw some crowds gathered around so we figured that must be the start line.  As we got closer, I saw hand written signs on posts stuck in the grass that said "5km"  "10km" and "2km".  Ok then.  I had opted for shorts, a tank top with my WTP singlet over it + my crazy tattoo Sugoi armwarmers.  Shorts was ambitious.  I was so bloody cold I went back to the car to change into my tights.  There was no way I could stand around in shorts.  I got my tights on and did a few laps around the parking lot along with some drills to activate my glutes.   I ran into Deb, one of the gals from my run group who was also doing the 5km.   We jumped into the crowd and made our way towards the front.  Her hubby Eric was racing the 10km so he snapped this shot of us before we took off. 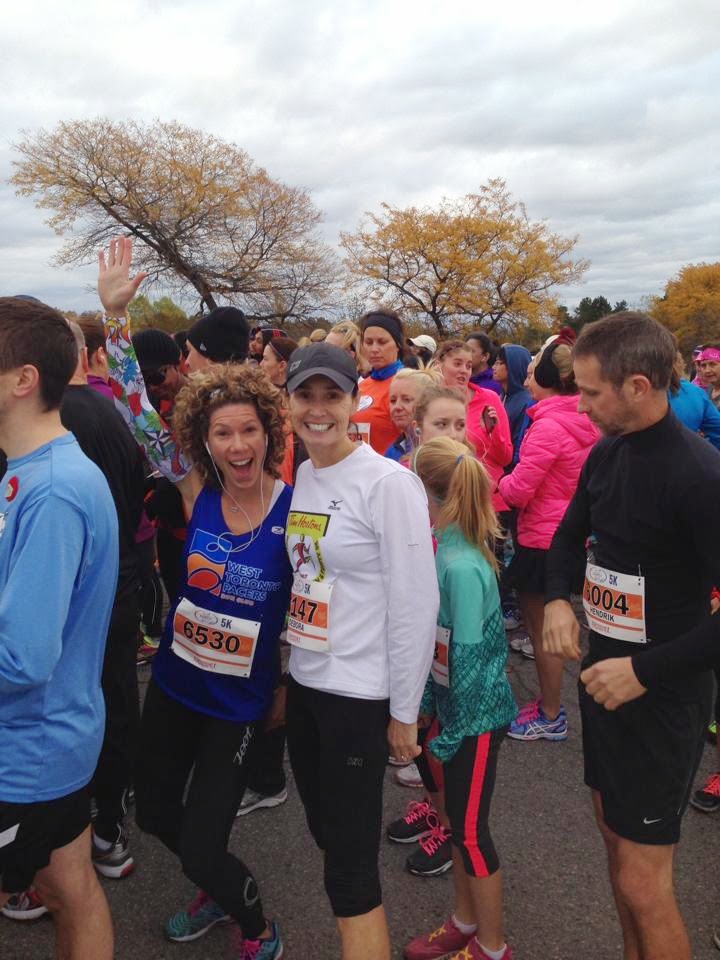 Anyway.  I shuffled up closer to the front and then the next thing I knew, the gun went off.  I was not in an ideal position at all.  I had to dodge a lot of people before we got to the first turn. Once we turned the corner, there was room to spread out and pass people.  I could see a younger girl in front of me with a guy so I focused on reeling them in.  I was pushing hard.  I caught them just before the first km mark.  My Garmin beeped at the km mark and I glanced down to see a 3:58.  Um.  What?!  I didn't think I was capable of seeing those speeds right now.  I knew I wasn't going to be able to maintain that but I was going to try to stick as close to that as possible without barfing.

I could see another woman and a young girl a fair ways in front of me.  I couldn't tell if I was gaining on them or not.  It wasn't until we got close to the turn around that I felt I was closing in on them.  I prefer to be the chaser.  I find it very motivating to have someone in front of me that I have to catch.  These two girls were running together.  I'm not sure if they were mother daughter or if they knew each other.  Whatever the case, they were the two lead females.  I knew that if I caught them I'd be in the lead.  We hit the turnaround and I got ready to run into the wind.  I knew coming back along through Kings Bridge park was going to be a wind tunnel.  It was the same with Barrelman.  I'm booking it along when all of a sudden I become aware of a very strange feeling in my hamstrings and glutes.  They were slightly burning.  The harder I went, the more they burned.  I could feel them working!!!  OMG.  I'm not sure what excited me more at this point.  The fact that I had actually managed to recruit my glutes or the fact that I was very close to catching these two women.

I heard someone yell my name (hey Shelley!) so I said "Hey" back and that startled the younger girl.  I was literally right behind them.  She turned around, saw me as I passed and surged to stay with me.  She hung on for a bit and then fell off.  When I say younger girl, I'm talking about 10, maybe 12 years old.  She was YOUNG.  But she had a set of legs, holy smokes.  I had no choice but to keep it pinned.  The finish was down by the Niagara Power Plant right on the Niagara Parkway.  It was a nice gradual downhill from just past the 4km mark.  I let my legs go on that downhill.  I saw G and waved.  As I came around the bend, I saw the tape go up and I started grinning.  I've won a couple of races outright but I've never actually gotten to break the tape.  This was going to be the first time.  I raised my hands in the air and smiled as I crossed the line. 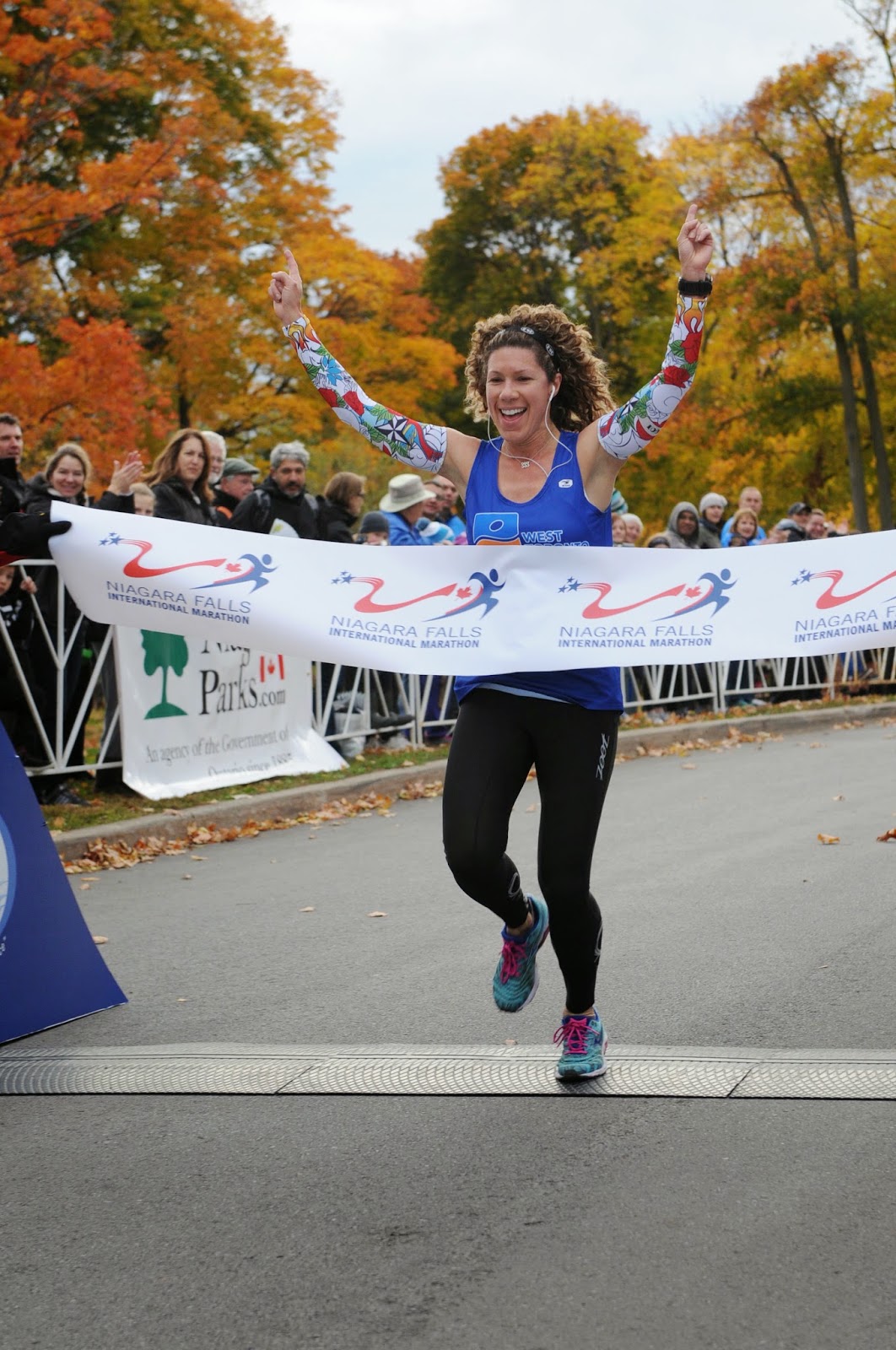 And of course I had to buy the race picture because it's not every day that you get to break the tape!

I can officially say that's it for my 2014 racing season and what a season it's been! I definitely need a break.  I'm currently in full on rehab mode.  I feel like things are moving in the right direction and I'm having more good days than bad so that's a plus.  I'm hoping that I'll be able to get into a more regular routine come December and then I can start to plan out my 2015 season.  Fingers crossed!

Posted by Phaedra Kennedy at 2:26 PM

So awesome! Definitely a photo worth buying!

GIRL. You are such a beast. My best times are definitely and always the ones that I expect the least. Huge props on a race well done!

Great race, fantastic race report! I love how casual you were about the race, drinking beer the night before and eating not your usual pre-race food...perhaps that's your new secret to success?! Seriously, sounds like a well-executed race with some smart strategizing on your part. I mean, it would suck to be beaten by a 12 year old, even one with fast legs! I bet she couldn't believe it when you passed her! Rest those knees for a bit now!