I can't believe that I am 8 days out from my 70.3.  Eight freaking days.  And we leave in 3 days.  I've only *just* started packing.  There is SO much to think about / remember when you're doing a destination race, it's kind of stressful.  Especially one that involves 3 different sports.  I am a list maker at the best of times but when I travel it gets taken to a whole other level.  Thank goodness I have a huge suitcase. 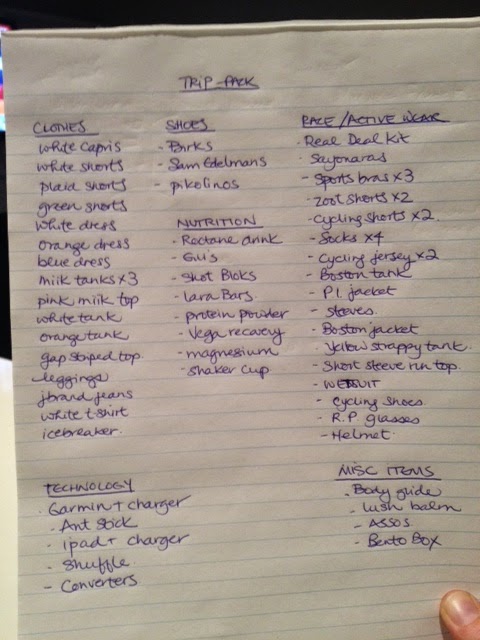 Because there's no such thing as too organized.

I may not have my packing done but I am SO ready for this vacation.  I think G is too.   Speaking of G, a few of you have asked how he's doing (which I really appreciate, thanks!).  He's still out for this race, which sucks, but, his prognosis is much better than originally thought.  He was originally diagnosed with a grade three separation which meant that he tore 3 of the 4 ligaments in his shoulder.   The doctor at St. Joe's told him to take it easy and let the pain guide him as to what he could and could not do.  No mention of when he should start physio, nothing.  Luckily for us, I have an amazing chiropractor who, when he heard about what happened, emailed me asking how G was.  He then said that G should come in right away to see him and a physiotherapist.  If we hadn't gone away that weekend, G would have been in to see him on the Saturday, a mere 2 days after his crash.  He got in to see him on the Wednesday and then in to see a physiotherapist on the Thursday and has been going to see both of them once a week since the crash.  He's gone from having to keep his arm in a sling to now having almost full mobility.  It's still somewhat painful for him to move his arm certain ways but it's so much better than it was.   Needless to say when G went back to see the Dr. at St. Joe's for a follow up appointment 3 weeks after the crash, the Doc was amazed at how well he was doing.  He even took a second round of x-rays.  He was able to see a lot more since the swelling had gone down and he actually thinks that G has a grade 2 separation, which is great because that means the healing time *should* be less.   G was given the all clear to ride on the trainer a couple of weeks ago so he's been doing that 3 times a week and he was just given the ok to start running as long as his shoulder is taped up.  He went for his first run on Wednesday and he felt pretty good.  This makes me SO happy, I can't even begin to tell you.  He's also been cleared to get into the pool to try some breast stroke.  No front crawl yet.  I think he may go give that a whirl on Sunday morning before we leave.  The best part of all this?  He's feeling confident enough to join me outside for my last ride before we leave.  I was so happy when he told me that yesterday, I started jumping up and down.  It's the little things, folks.

I finally got my race info yesterday.  All 27 pages of it.  Holy moly.  Apparently the race starts at 1:00 pm.  In the original info on the website there was conflicting information.  One area said a 10:00 am start and the other area said a 12:00 pm start.  Now it's a 1:00 pm start.  Ugh.  The pros go off at 1:00 and 1:02 pm respectively (males first, then females), then it's ALL the women at 1:10.  I was a little surprised at that until I went through the age groups and counted up the number of ladies participating.  There are only196 age group women!  That's it.  The men have been divided up into waves according to AG because I think there are at least 100 men in each AG if not more.  This should make for an interesting swim.  The 50+ men start after us at 1:20.  I hope I don't get caught by too many of them.   I feel bad for the relay teams and the 40-44 year old guys, they don't head off until almost 2:30 pm! 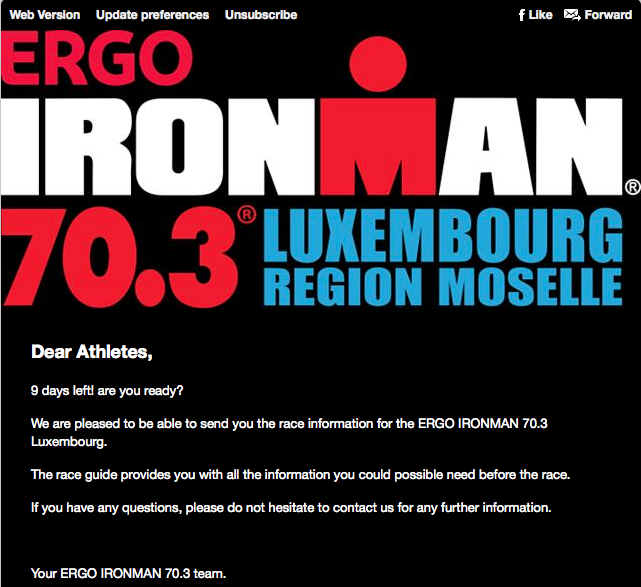 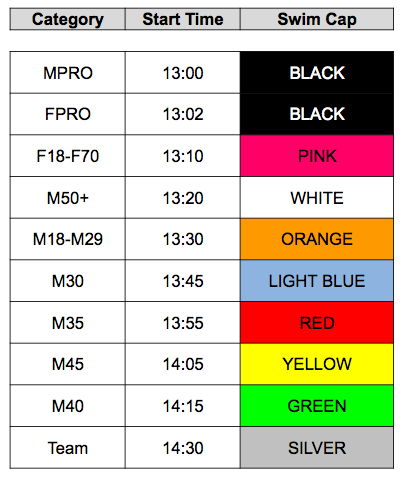 I'm a little concerned about the later start time.  I guess it just means I'm going to have to eat the same meal twice.  Once for "breakfast" and again just before we head to the race.  I'm also going to make sure I pack a bunch of Lara bars.  The last thing I want is to start the race feeling hungry.  That is a recipe for a bonk of epic proportions towards the end of the bike.

Every time I think about the race, I get butterflies.  I'm nervous.  I know that's natural.  I'm also kind of excited.  Way back at the beginning of the year I set out a time goal and I mentioned another goal that I wasn't ready to share yet.  I'm happy to share it now:  my goal for this race was to qualify for the 70.3 World Championships in Mont Tremblant in September.  For me to do that at this race, I'd have to win my age group since there's only one spot available.  There is a chance the spot will roll down but in all honesty, I'm not that fussed if I don't make it there.  That goal has caused me to put too much stress and pressure on myself and kind of took the fun out of my training and I don't want it to take the fun out of my race.  Yes, I want to do well.   How I define "well" is the question.  I think it's going to come down to a few things.  1) Did I execute my race plan successfully?  2) did I give it my all on the course?  If I can answer "yes" to both of those questions at the end of my race, then I will have "done well".  Anything else is just gravy.

Posted by Phaedra Kennedy at 1:53 PM

Oh man, I cannot imagine starting a race that late in the day! That would make me crazy. So happy to hear G is feeling better. Enjoy your vacation, your anniversary, and your race!

I am so not an afternoon runner! Fueling would be a challenge for me. I'm anxious to hear how it all goes!