I was introduced to Kirsten 13 years ago through a mutual friend.  She had just relocated to Toronto from South Africa and didn't know single person in the city.  So we made plans to meet up and much to our delight we discovered that we both loved running.   Ironically enough we both met our life partners within months of each other as well.  Over the years our lives changed and running took a back seat for both of us for different reasons.   This is Kirsten's story about how she got back into running.

As you know, I was a runner way back in another life. But then life happened, I had a baby, and I stopped running. Over the years, I made several half-hearted attempts to get back into it, but there was always something stopping me. My dad died of cancer. I had another baby. I got walloped by post-partum depression. I developed a respiratory infection. I had plantar fasciitis. I was a working mom with two kids and no time. The post-partum depression morphed into good old garden-variety depression.

My depression went from bad to worse when my son was diagnosed with autism. I felt as if I had been dumped in the middle of the special needs parenting jungle without a compass, or even any clear idea of where I was supposed to be going. As I struggled to cope, my body got more and more unhealthy. I knew that I needed to do something, and I always told myself that I would start an exercise program “on Sunday".   But Sunday would come and go and there would always be a reason I didn’t do it.

This happened every week for another two years or so, until the morning a chance email landed in my inbox. It was from the Geneva Centre for Autism, and they were entering a team in the charity challenge of that year’s Scotiabank Toronto Waterfront Marathon, Half-Marathon and 5K. Was I interested in joining the team, and raising funds to provide services for children with autism?
At first I contemplated the 5K run. I didn’t think I was capable of more than that. I hadn’t run in years, my lifestyle was completely sedentary, and I was tipping the scales at a little over 200 pounds – a good 70 pounds more than I had been during my physical peak years before.

But then, completely unexpectedly, my old impulsive spirit – the one that had never done things in small pieces – raised its head and told me that 5K wouldn’t make me happy. It urged me to go for more. It told me to aim for something that I would really have to work hard for.  I grabbed a calendar and navigated to the Hal Higdon online training plans, and worked out that with six months to go before the race, I just about had enough time to train for a half-marathon. Before I could change my mind, I completed the online race registration and hit “submit”.
And just like that, my motivation was back. Through all the years of hating my body, rueing the state of my physical and mental health, and going through one injury and illness after another, all I had needed was the right reason to run. As soon as I started training, I knew that I wasn’t going to give up. I was going to run this race for my son.

Over the next six months, I gradually built up my mileage and lost sixty pounds. When the going got tough and I felt like giving up, all I had to do was think about the reason I was doing this. My child had to live with autism every single minute of every single day for the rest of his life – the very least I could do was run for a couple of hours.

I remember very little of the couple of hours before the race, except that I was feeling anxiety so intense that I wanted to throw up. But as soon as I crossed the start line, magic happened. The anxiety melted away and I got lifted up by the collective energy of the crowd.
Two hours and 28 minutes after crossing the start line, I crossed the finish line, triumphant but exhausted (I remember seeing Phaedra among the spectators about 300 metres from the finish, and seeing a friendly familiar face gave me the energy for a great finish line kick).

I've just run my eighth half-marathon since that day, and my fifth for the Geneva Centre. I have become leaner and fitter, and I have shaved more than ten minutes off my time. But I don’t know if anything will ever compare with the feeling I had after that first half-marathon. I was sobbing with the emotion of it all.
This story got a lot longer than I intended it to. Really, what it comes down to is this: my son got me back into running, and he’s the reason I will never stop again. 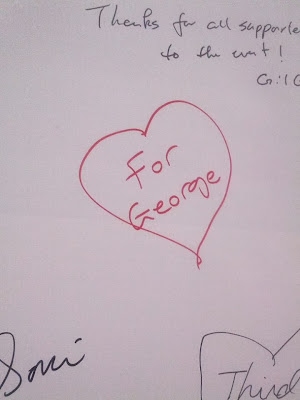 Thank you Kirsten for letting me share your story.  It's been a real inspiration to see your passion and dedication in action.

Here's where you can find Kirsten on the web:

Posted by Phaedra Kennedy at 8:46 AM

Way to go Kirsten, you're a great role model to all parents! We can only take care of our dependents if we are strong and healthy first! You're an athlete after my own heart, fighting for more than just medals!