After all the months of racing and training that culminated in my A race on Sunday, my plan was to cut myself some slack this week.  That meant NO running.  Maybe some gym time and definitely some swimming and maybe a a spin on the bike.  I have been pushing my body a lot these last few months so I really need a bit of down time.  I swam yesterday and just about died.  I was exhausted.  I floundered through a set that I'd normally have no problem with.  I shouldn't really be surprised, I busted my ass on Sunday and didn't exactly eat the healthiest food post race (eggs benedict with extra bacon, a pumpkin spice latte and pizza and beer for dinner).  But that's ok.  I'm not racing again until December so I can afford to take a bit of a break.  This week has been all about taking it easy.

I was a bit stiff on Monday and my feet were really sore so I opted to skip my swim and sleep in.  Tuesday I figured I should get up and move around so I went to the gym and did some light lower body work, core and upper body work.  Wednesday I hit the pool and today I opted to sleep in again.  I figured I might as well since I'm going to be out late tonight and I want to make sure I can stay up, ha ha.  God I'm old.   Where am I off to tonight you ask? 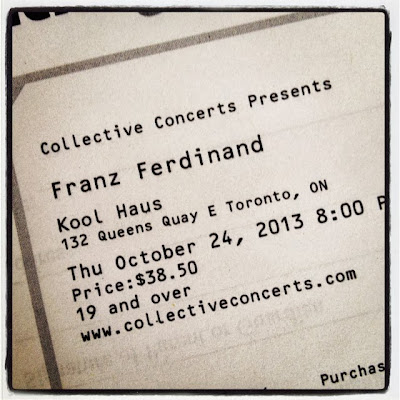 To say that I am excited would be a gross understatement.  I bought these tickets in JUNE.   I have been listening to their new album all. freaking. week.  I am SO ready to go and bust a move.  I've spent the last 2 days chair dancing in my office.  I even took the day off tomorrow so I can recover, ha ha.

Saturday I will be doing checking another thing off my 2013 To Do list.  I am volunteering at the Toronto Women's 8km.  I wanted to give back to the running community somehow but with the amount of training / racing I did over the course of the year, finding the time was difficult.  The timing of this worked out perfectly.  I've run this event before and it's excellent - the entire series is actually.  I know a few people who are racing as well so it will be nice to be there to cheer them on.  I'm going to be working the start / finish line so come by and say hi!

I'm also starting to plan out my 2014 race season.  The first half of the year is pretty much figured out.  Boston is once again my spring A race.  I have several friends doing the Chilly Half so I'll be doing that again as well as Around the Bay.  This year ATB will definitely be all about race day strategy for Boston.  I'm not going to go out and kill myself like I did this year.

The second half of my season is a big fat question mark right now.  There could be something BIG-ish for G and I but we haven't quite figured out the details yet.  It's also our 10 year wedding anniversary so we were hoping to take a trip to Europe in the summer.  That will more than likely happen it's just a question of where.  So stay tuned for that.   Either way, I will definitely be racing tris again next summer.

Don't forget to enter my giveaway for my new favourite pillow!  It ends this Friday!

Have you started making plans for your 2014 racing season?  If so what races will you be doing?

Posted by Phaedra Kennedy at 11:03 AM

I've registered for the ATB 30K, which is frankly terrifying because I've never done anything longer than a half-marathon. I will also definitely be doing the Scotia half again. Other races are still to be determined, but I have challenged myself to do 14 races next year. Why? Well - why the hell not, right?

I just want to improve 26 seconds on my marathon time, so that I can qualify for Boston! May 4th is the day, at The Goodlife Fitness Marathon:)

I've signed up for the Robbie Burns 8k in Jan, will do Chilly of course. I'm on a Disney cruise in mid-Jan and will run their private island 5k (because, why wouldn't you?!?!). Signed up for ATB and I may even race it this year (normally I just use it as a training run), then the big BQ goal race will be the Mississauga Marathon on May 4th! I'm signed up as a Ragnar team to do the Cobourg to Niagara relay at the end of May and I'll do the Midsummer 30k (hope to pace again). I usually run the Bread & Honey 5k and after placing 4th in my AG last year with a horrible race, I'm off for redemption in 2014. September brings hometown Milton Half (run by Running Free), and who knows what else? Guess I've already got a lot planned. Huh.