This has been a very active weekend.  Although I think every weekend is a fairly active weekend in our household.  It's just what we do.  This weekend started with us having friends over for dinner on Friday night.  We shared a lot of laughs and a lot of wine.  I'll admit I had a wee bit of a hangover when I got up on Saturday morning.  I almost bailed on our ride but figured some time outside in the fresh fall air would do me good.

We were going to be riding with our friend Jordan, who had been at our place for dinner the night before, as well as Adam who is G's friends son.  Adam is all of 16 years old but has taken a keen interest in cycling.  Adam's dad mentioned this to G a while ago and G pointed them in the direction of our local bike shop, Wheels of Bloor.  The guys there fitted him on a decent entry level bike and got him into a good pair of cycling shoes.  G has given him some of his old cycling jerseys and has been bringing him along on some of the long rides he's been doing.  Last week they went out and did a route that was almost 100km.  It was Adam's longest ride ever and of course, being 16 years old, he had a ton of energy even after the ride.  G told me afterwards that he called Tom (Adam's dad) and told him that he thinks that Adam has the potential to be a great rider.  So since we were riding again this weekend, he emailed Adam and asked if he wanted to come along.  Apparently Adam was bouncing off the ceiling at being able to come out with G again.  Knowing G, he will continue to help Adam grow as a cyclist in any way he can.  I rode with Adam for a while and he definitely has the potential to be a strong cyclist.  He rode away from me on a climb like I was standing still.  I honestly think that us old fogies held him back a bit.  We talked gear, Top Gear and music (he also loves Rush) for quite some time.  He's a great kid and I'm happy that we can help him get those miles in on his beloved bike.

It was a perfect day for a ride.  The fall colours are starting to come out.  I suspect in a couple of weeks everything will be lit in a blaze of colour.  Just in time for Thanksgiving!

When we got home, our nephew called to tell us that he made the Richmond Hill A Team for baseball.  This is a big. freaking. deal.  Drew is an incredibly talented baseball player. His previous team was coached by two dads that had their kids on the team and they played favourites so Drew never really got many opportunities to play infield or pitch.  Drew is an excellent all rounder who really understands the game.  He's smart and he's got the size and physical ability.  He's 13 years old, and already 5ft 9 with size 13 feet.  Every time I see him, he's grown another inch.  Seriously.  I don't know what my sister in law is feeding him but he keeps growing like a weed. Anyway, he didn't have a very good experience with this team so his parents decided it was time to move him elsewhere.  He went to Richmond Hill and went through all 5 rounds of try outs.  There was room on the AA team and the A team.   He made the A team and was totally ecstatic.  As were we.  This was a HUGE relief for him and a fantastic opportunity for a fresh start.  We weren't able to have kids of our own so it's nice to be able to be supportive and involved in the lives of these two budding athletes.  Both of them make us proud!

Today was my last big run before Scotia before I start to scale back my mileage.  My original plan was to get up really early and do my 24km before my 8:00 am swim.  Insane, I know.  My alarm went off just before 5:00 am.  I actually got dressed and went downstairs to eat breakfast.  Shortly after I ate, I decided that I really didn't want to go and run 24km in the dark so something was going to have to give.  I opted to bail on my swim.  I went back upstairs, put my pj's back on and slept for another 2.5 hours!  I must have needed it or something, ha ha.  I got up, got re-dressed and ate a Lara Bar, then headed out the door.  My legs felt very heavy when I started.   That's what happens when 1) you haven't been on your road bike in weeks and 2) you go out and ride a hilly 45km.  But whatever, sometimes it takes me a little while to get into a groove.  I figured by about 6-7km I'd be ok.  Sure enough around the 6km mark, I started to feel like I had warmed up.  My pace started to drop.  I was also boiling hot.  I opted for a short sleeve t-shirt when what I should have worn was a tank top.  After 15 years there are time where I still can't seem to get it right.  Oh well.  The run was tough.  Good but tough.  My legs were tired at the start and continued to feel that way throughout.  The last 4km were the toughest as I was running into the wind.  I also decided to push the pace the last few km so I had to dig a little deeper than normal.  It was all about running on tired legs today.  I guess you could say I nailed that, ha ha.  I made it home in just under 2 hours, one sore, tired, sweaty mess.  There is definitely going to be an epsom salt bath in my immediate future.   I am starting to get excited about Scotia.  I feel like these last few weeks of hard training are starting to pay off.  Look out sub 1:30, I'm coming for you! 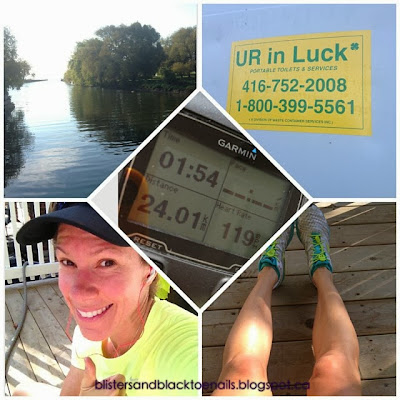 How has your weekend been?  Did you get out and enjoy the great fall weather?

Posted by Phaedra Kennedy at 3:37 PM

I definitely enjoyed being OUTSIDE! It's getting cooler and I'm excited - awesome job cycling girlie!

Thanks Kat! I saw that temps are finally dropping out your way. YAY!!!

What a great weekend! Looks beautiful there this time of year. I love your nephew's baseball story. My 9 year old is a baseball player and is having a similar experience with the "favorites" issue. He wants to pitch so badly and has shown his ability (he's the hardest thrower on the team) but other kids get to pitch instead of him because they have more experience...yeah, vicious cycle. Good call on the run, I think sometimes you gotta listen to your body's needs and get more sleep! I have the same problem with clothing and often overdress! Love the portapot picture...always lucky to find one of those!