Sometimes You Just Need to Chill Out and Then Run a Race.

Yesterday was probably one of the most relaxing, laziest days I've had in a long time.  I stayed in my pj's until almost noon.  That is unheard of in my world.  It was such a crappy day out that the thought of leaving the house really didn't appeal to me.  Plus, it was the first Saturday in a long time that I was actually taking off from working out.  I usually take Fridays as my day off but because I was racing today, I figured Saturday would be a better day to sit around on my duff.  I wasn't wrong.  I poured rain and was generally miserable for most of the day.  G had a boys afternoon / evening planned with his Dad and nephew so he left the house around 1:00 pm.  That meant I had the house all to myself.  YEAH.  I finally got out of my pj's just before noon.  I then made a grocery list and headed off to the grocery store.  I figured since I had the house to myself, I'd crank the tunes and do some cooking.  It has been AGES since I've actually had the time to do any sort of meal prep so I took full advantage of my free time.  I had quite the productive afternoon.  In between the stove and burners being on, the air conditioning being off and me dancing around in the kitchen, I actually worked up a bit of a sweat.  It felt good to get finally get back on track and know that I've got some good eats tucked away in the fridge for this week.   I made pancakes for my post race eats and I was nice enough to share them with G.  I roasted some cauliflower with some BBQ sauce and nutritional yeast (a Sprint to the Table recipe).  I cooked up some quinoa, made a cucumber and tomato salad, some mini spinach and roasted red pepper crustless quiches and lastly, my fave chick pea pizza crust.  I have a few other things I want to make today but we'll see if I can actually muster up the energy.  I'm thinking that's probably not going to happen. 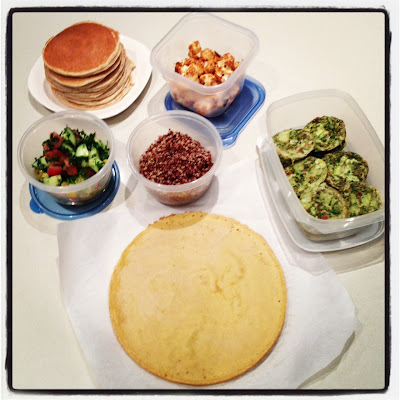 After my cooking bonanza, I ate dinner, sprawled out on the couch and watched a movie!  I know!! I sat still for more than 15 minutes!!!  That right there is proof that miracles happen!  I rented The Fighter with Mark Walhberg and Christian Bale.  Holy smokes was it ever amazing.  By the time I got to bed it was almost 10:30.  I slept like crap, probably because of my late afternoon Pumpkin Spice Latte.  And probably because I was actually a little apprehensive about today's race.  I knew it was going to hurt, I was more concerned with the fact that my hamstrings were still really tight and sore from my Thursday night workout.  They've been bugging me for the last week or so.  I think my race at Toronto Island pushed me over the edge.  I've been stretching and foam rolling but what I'm really in need of is a massage.  Anyway, part of me was concerned that perhaps I might do some damage if I pushed too hard.  The other part of me figured that with a good warm up, I'd be fine.

My training schedule called for a 21km run today, although for some reason I kept thinking it was only 20km, ha ha.  I figured I'd do a good warm up of maybe 6-7km, race the 10km and do a cool down of 3-4km.  I got to the race venue early, picked up my bib and chip and then set off on my warm up run.  I felt like crap.  Heart rate was high, legs felt like lead, hamstrings were sore, blah blah blah.  I figured that today would be whatever it would be.  I wasn't going to stress about anything.  I knew that I had gotten faster over the last couple of years so I figured that I'd probably beat my old 10km time of 41:55 that I set in 2011. I was really hoping to break 40 minutes or at least be close.  After my crappy warm up, I made my way to the start and tried to keep limber.  I did leg swings and walking lunges and then stretched a bit.

We were herded into a small starting corral and I seeded myself in the second row of folks.  It was mainly dudes up front and one fast looking woman.  The guy with the megaphone counted down and then yelled GO (guess that's what you get when the entry fee is only $15).  I flew out of the staring corral, trying to keep Miss Fast Runner in my sights.  I managed to do that for about the first 3km.  Good lord was she ever quick.  I wasn't doing too badly myself though.  My first 3km were all sub 4:00 min kms (3:47, 3:57, 3:58).  I told myself I need to chill the hell out and not kill myself so I tried to settle into a pace that felt a bit more manageable.  The next two km were 4:07 and 4:09.  Not really the direction I wanted things to be going.  This course had pockets of wind and it was obvious when looking at my splits.  My 5th km was 3:59.  It was at about 6km that things started to get ugly.  I was running right back into a headwind.  Bloody Hell.  That's the one thing about racing out on the spit is that you get the wind off the lake.  Sometimes it's favourable, sometimes it's not.  Today it was not.  Every km from 6 on was over 4:00 min.  I hovered around 4:08's for the most part.  I honestly can't be too upset about that given the state of my legs and the wind.  The km markers were way off and I knew that the course was going to be short.  Again, for $15 I wasn't expecting a whole lot of awesomeness.  I busted a gut that last few hundred metres and crossed the line in a time of 38:48 for 9.59km and ended up being second place woman overall.  Miss Fast Chick kicked my ass and ran a 37:29.  My average pace worked out to be 4:02 km's so that would have put me at 40:20 for 10km.  That is a whole minute and a half faster than my previous 10km PB.  So yeah, I'm pumped. 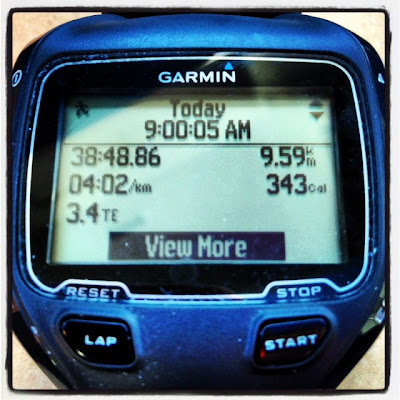 This gives me an idea of what I need to work on over the next 7 weeks.  I'd like a little extra speed but what I really need is late race endurance.  My legs really started to give up in the last 3km.  I don't know if that's because they were fatigued going in or if I really do need to work on it.  I have to average slightly faster than 4:15's to break 1:30 and I want it to feel like it's tough but manageable so I think  I need to spend a bit more time in the hurt locker, ha ha.

How was your weekend?
Posted by Phaedra Kennedy at 2:45 PM

Back to the grind after being in Disneyland! Sometimes R & R is SOOOO needed!