That's All She Wrote..

Well guys, that's another training cycle just about done.  I did my last long run before Boston on a gloriously sunny but chilly morning today.  Skipping that 8km race was definitely the right call.  My legs felt like they were at about 85%.  My right one is totally fine but my left one needs a little bit more help.  I started off feeling a little rough and I actually debated whether or not I was going to continue.  I thought it would be wise to at least let my legs warm up a bit more before I made that decision.  I'm glad I did.  Despite the tightness and pinching, I still managed to run pretty close to my goal pace (I was 1 second slower per km than I needed to be).  The best part?  It felt easy.  At this stage of the game, I couldn't ask for anything more than that.  Except maybe some warmer temps.  Please?  It's April for Pete's sake!!

Now all I need to do is get through this last week without incident.  That means busting out the big guns.  I've got to make sure I get my greens in, even if that means supplementing with Greens Plus.  I'll also get back on the Immunity FX bandwagon.  Yes, I'm absolutely, totally and completely paranoid about getting sick.  I know I was feeling a little run down yesterday because I went to bed last night at just after 9:00 pm (on a Friday, yeah I know how to live it up) and I slept until just past 6:30 am.  That's 9.5 hours of pretty much uninterrupted sleep.  Guess I was tired.  I'm feeling tired now too but I suppose that's not surprising.  My body is obviously in major rebuild mode.

I'm also going to have to start packing sooner rather than later.  The last thing I want to do is be running around like a mad woman throwing things into a bag on Thursday night.  I've been told to pack light because we're driving down to Boston in our new wheels and there apparently isn't a whole lot of room in it.  I'm calling it G's Midlife Crisis car because it's a convertible.  It's not a Porsche or anything crazy like that.  We're both big VW fans so the choice was fairly obvious.   We got a Volkswagen EOS and it looks exactly like this: 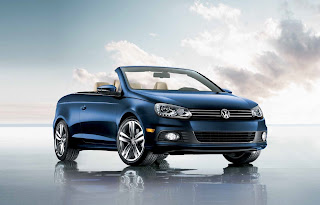 As long as the sun is out and it's above zero, G will have the top down for the drive down.  I'm going to have to make sure I pack a hat or two and maybe a blanket.  Hopefully there's enough room....

Do you do or take anything specific during your taper?
Posted by Phaedra Kennedy at 3:52 PM

Good for you so excited for you! I freak out during taper lol

I'm SOOOO excited for you :)

I don't blame you at all about upping the super nutrients. I know this week will most likely be super stressful but I hope you still find ways to enjoy it!!