I feel like Sunday's race report almost needs a post race report.  I've told my story so many times in person but I have yet to put it down here.  I said it before and I'll say it again;  I can't thank the online community enough for their concern and support last Monday.  It means SO much to me and it just reinforces that fact that runners are an amazing bunch of people.

As most of you know, I finished the race on a total high.  It was such a fabulously perfect day, I honestly couldn't have asked for anything better.  After I made my way through the finishing chute and grabbed some warm clothes, the plan was to meet G under the K and head straight to M.J. O'Connors pub for a celebratory pint or two, no going back to the hotel to shower, nothing.  I shuffled along with G, my legs more than a little stiff and wobbly.

We got into the pub to find it pretty busy already.  Thankfully we managed to get a seat in a booth.  I flopped down and awaited the arrival of the rest of our contingent.  About 20 minutes later Linnea & Glenn show up and then shortly after them Anna and Dave show up.  Anna had a fantastic day, running a 3:11 and change which was a P.B for her on that course.  She blew by me at the 4km mark and that was the last I saw of her.  So we had a lot to celebrate.

We were all enjoying a celebratory beverage and some grub when my friend Kiki and her dad finally showed up.   She had a rough day but she finished.   She mentioned that something crazy was happening at the finish line.  She said she was in the baggage area getting her stuff when she heard a big explosion.  The cops yelled at everyone to clear the area.  She said it sounded almost like a transformer blew or something.  None of us really thought anything of it at the time until about 10 minutes later when Linnea picked up a message from someone asking if she was ok, saying that they heard that a bomb went off at the finish line.  We were all shocked.  I could see one of the TV's in the pub and I could see some footage of people running but I didn't know where it was.  Then my phone rang and it was my work calling, asking me if I was ok.  Our receptionist told me that they heard that a bomb went off at the finish line.  I was stunned.  But still not quite processing everything.

The pub was still playing music, but they switched all the TV's to a local news channel.  We were watching things unfold, still in shock.   I called my parents right away to let them know I was ok.  Then Ben Kaplan from the National Post called me and asked me if I was in Boston.  I said yup and tried to answer his questions as best as I could.   Shortly after I hung up with him, my phone started to go nut with incoming text messages.  I tried to get on Facebook to post that I was ok but the internet was so slow.  Then it seemed to stop working altogether.   The pub turned the music off and fed the live broadcast through the speakers and we all sat there in stunned silence.  The atmosphere in the pub went from celebratory to complete silence in the span of a couple of minutes.  I can't remember what time we finally left the pub.  It might have been close to 5:00 pm.  G started to get worried that we wouldn't be able to get back into our hotel so he figured we should get out and make our way back.  Sure enough our hotel was on lockdown.  We were lucky enough to be able to hang out in the back entrance of the Marriot for a while.  I was cold and starting to get cranky as I hadn't really eaten anything substantial since I finished the race.  So we opted to walk around and try to find a restaurant.  The streets were almost empty other than a handful of other folks that were also displaced.  It was creepy.

We ended up at a restaurant called Coda.  I finally sat down and ate and was able to charge my phone.  G's phone died when we were in the pub and mine was close to dead.  Luckily there was a woman there who had a charger and she was nice enough to let me use it.  As soon as I turned my phone on, it started dinging.  9 text messages, a ton of twitter messages and voicemails.  I returned the texts and then called the hotel to see if we could get back in.  Sure enough they had just started letting people back in.  I almost started crying.  I just wanted to be off the streets and somewhere safe.

As everyone knows, it was virtually impossible to not hear about it on the news.  I found it difficult to watch the coverage without crying.  Such a senseless act of violence, directed at the people that deserve medals of their own for coming out and showing their support to the running community.  Boston wouldn't be the race it is without the spectators.  They play a HUGE role in making the race the legend that it is.  So when Brian Kelly over at Pavement Runner tweeted me on Wednesday asking if I'd be interested in hosting a #BostonStrong event in Toronto, I was all over it.  It's people like him that make the running community such an amazing one.  Check out his blog to see just how many places participated in this event.  It's truly mind-blowing. 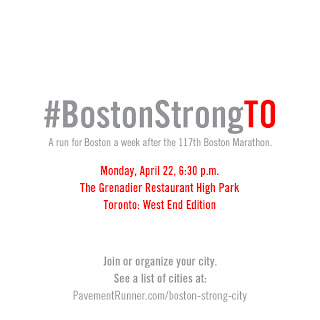 I would have been happy to have a small handful of friends to turn out to last nights event but the West End Toronto running community is a big one and word spread quickly thanks to social media.   I created the event on Thursday and tweeted about it, shared on my personal Facebook page and my Facebook blog page.  Brian, being the amazing soul that he is created a graphic for the Toronto edition and posted it on Instagram.  This brought out even more people.  People that I follow on IG but that I've never met.  I finally got to meet them last night.  What a fantastic experience.  I even got interviewed for the 5:00 pm news.  I'm proud to say that we had over 50 runners show up last night and almost every single one of them was wearing blue and yellow.  We even had our own cheering section with cowbells.  I met a whole bunch of new people, finally got to hug everyone in my run group and did my first run since Boston.  My legs may have been heavy but my heart was light.  It was such a wonderful experience and I'm thankful to everyone that came out to show their support.  Love you all! xo 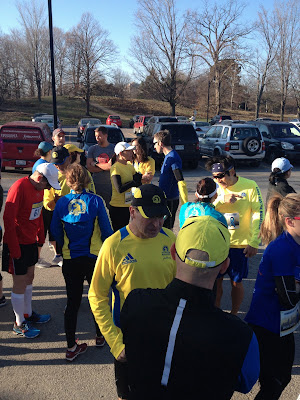 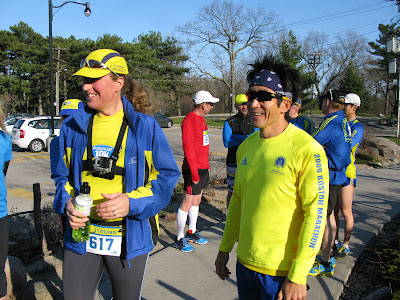 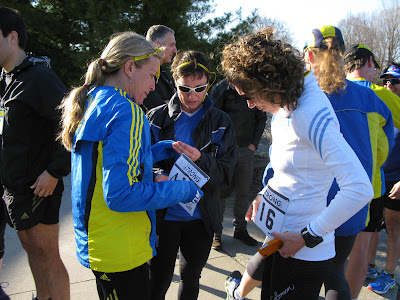 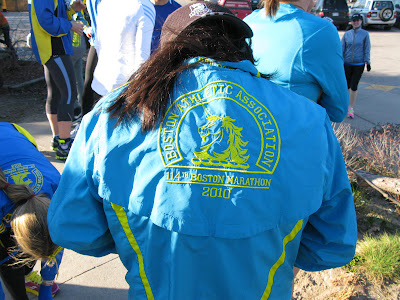 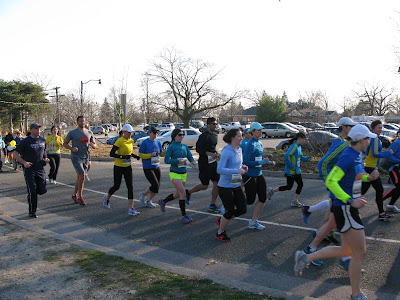 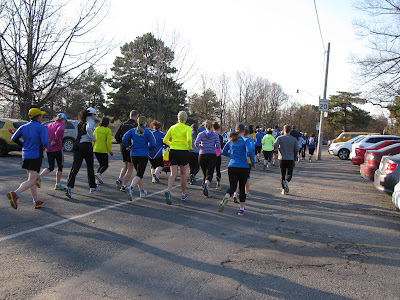 Posted by Phaedra Kennedy at 11:30 AM