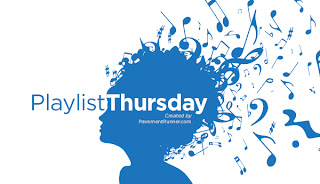 I am all over this Playlist Thursday theme like white on rice.  This week's theme is High School Jams.   We have to pick songs we listened to in High School.  Yeah I know this one is totally going to date me but whatever.  I'm owning it.  My High School years were some of the best years of my life and music played a HUGE part in those years.  The rules are a little different for this week so here we go:  "Old" would still be an old song that was at least 5 years old when you were in school.  "Current" would be whatever your favourite song was on the radio at that time and "one to consider" is once again, your choice, but it should be one that you enjoyed in high school.  Because there is so much music that I love from that time period, I'm going to throw in a few honorable mentions as well.

So let's get this Retro Dance Party started!

Notable:  This song always got the crowd up and dancing at the underage dances & clubs I used to frequent.  I fondly remember jumping around and "skanking" to this song.
Quotable: "I can't dress just the way I want, I'm being chased by the national front"

Artist:  U2
Title: Where the Streets Have No Name

Notable: This was the follow up album to 1984's The Unforgettable Fire and it totally blew my socks off.  I think that the Unforgettable Fire & the Joshua Tree are right up there as two of my favourite U2 albums.  And even 25 years later, this is still an amazing song to run to.
Quotable: "I want to feel sunlight on my face, I see the dust cloud disappear without a trace"

Artist:  The Cure
Title: Close to Me

Notable:  I was totally into these guys in high school.  They were one of many UK bands that I loved.  Just weird enough to be considered slightly outside the mainstream.  This album was one of my all time faves during high school.  I don't think this left my yellow Sony walkman for months!
Quotable: "I never thought this day would end. I never thought tonight could ever be this close to me"

Artist: Big Country
Title: Where the Rose Is Sown

Notable:  These guys had a MASSIVE hit with In A Big Country so that was the song that initially turned me on to them.  This is from their second album that was less of a commercial success in North America.  Who knows why, it's just as good as the first.  I absolutely love this song.  The beat, the guitar, the lyrics, all of it. They had such a unique sound.
Quotable: "Sons of men who stand like Gods, we give life to feed the cause and run to ground our heathen foe, our name will never die this time will be forever"

Artist: The Violent Femmes
Title: Add it Up

Notable:  Yet another song that would create a frenzy of sweaty bodies on the dance floor.  My friends and I knew the words to this song off by heart (swearing and all) and we'd sing it at the top of our lungs while jumping around on the dance floor.
Quotable: "Day after day, I will walk, and I will play, But the day, after today I will stop, and I will start".

Notable:  I absolutely loved this song, especially the video.  It always tugged at my heart strings.   There is something so hopeful yet so sad about it.  And it stars Canadian actor Donald Sutherland as her dad.  Gotta love the addition of a little Canadiana.
Quotable: "You're like my yo-yo that glowed in the dark.  What made it special, made it dangerous,
So I bury it And forget. "


What were your favourite High School Jams?

Did I take you a trip down 80's memory lane?

Posted by Phaedra Kennedy at 2:31 AM

Great list Phae! Was listening to the Cure today on the way home; singing along like a loon to Lovecats.