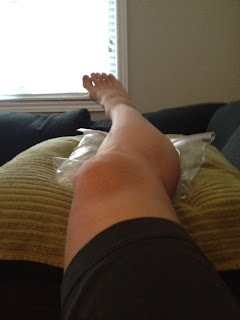 Those of you that follow me on Facebook or twitter, already know that I've been dealing with some calf issues.  After my amazing run last Sunday, I managed to tweak my calf.  I think the damage had already been done earlier in the week, I just went and exacerbated it with my exuberantly paced run.   So I've spent this week resting it.  That has meant no running, no cycling, no leg work.  That also means that I have been a bit of a mess.

I don't do well in the grey areas of life.  I prefer to know what the issue is and figure out a plan to deal with it.  I'm definitely action oriented, especially when it comes to my athletic health.  That's why I'm having such a hard time with this "injury".   I knew something wasn't right on Sunday.  I couldn't walk Monday but by Tuesday I was fine.  I was able to walk and the pain in my calf was pretty much gone.  I started to feel hopeful.  Then I went to the Chiropractor on Wednesday only to have my hopes dashed.  My calf was still super inflamed.  He couldn't do any deep tissue work due to the inflammation.  He opted for acupuncture instead.  It was excruciating.  After the session he said he wanted to treat this like it was worst case scenario, which would be a strain.  I was bummed.   I called Gary as soon as I got out and started crying.  As usual he helped to talk me off the ledge.

Saturday I went back for another round of treatment and my chiro confirmed that he thinks it's more than likely a strain.  What grade is yet to be determined.  I do know it's not a grade 3 strain so that in itself is a positive.  I won't know what grade it actually is unless they do imaging and they won't do imaging unless I'm not better after a couple of weeks off.  I won't know if I'm better until I try to run.  Oh the irony.  After Saturday's treatment, I couldn't walk so I spent the day either horizontal, icing my leg or hobbling around on crutches.   I am now facing week number two of no running or cycling.  I've already written off the 10 miler I was supposed to race on Sunday.  My other two races are also questionable.  As frustrating as that is to me, I've decided that I'm not going to let that get me down.  There are still some things I can do so I've decided to focus on those.

I can still swim.
I can still do upper body and core work.
I can do isometric / non weight bearing leg work.

So all is not lost.  I may even be able to do some pool running.   I'll have to clear that with my chiro on Wednesday when I got back for another round of treatment.  As much as I don't want to have to pool run, if he thinks I should be staying off my feet for a third week, I'll have to get back to doing some sport specific movement so I don't lose too much in terms of fitness.
I have to remember that my ultimate goal is to get to the start of the NYC marathon healthy and ready to go.  All these other races are really just training, although I don't necessarily treat them like that.  In my mind every race I enter is an A race.   I always go out and give 110%.  Maybe not the smartest thing to do but that's who I am.

I'm not going to say that not being able to run or ride isn't killing me, because it is.  I was literally just finding my stride.  I was feeling strong, my cycling was coming along nicely as was my running speed.  I was feeling invincible.  I suppose it's not surprising that the universe intervened and brought me back down to reality.  I've spent the last week feeling sorry for myself.  Of course it seems like everywhere I go there are people running.  I get facebook updates from my run group about the workouts.   Part of me just wants to crawl into bed and stay there but I know that's not going to do me any good.  It's not the end of the world.  Things could always be worse and I have to remember that.

So for now, I'll keep going to physio, focus on the things I can do and look for the positives in each and every day.   I can already think of one good thing that will come from this:  my swimming should improve in leaps and bounds.  Given that I've been complaining about how much I've been sucking in the pool, this is the perfect opportunity to fix that.

Have you ever had an injury that's kept you off your feet for an extended period of time?

How did you deal with it?

oh no. I'm so sorry to hear about this. Injury is never fun, especially one that is treated with (what sounds like) rest.

Sending positive vibes your way and wishing you a speedy recovery.

I've sprained my ankle before, which pretty much rules out running. Only way was to strengthen and rehab it.

Thanks Brian. In my 14 years of running this is the first injury I've had that has actually kept me off my feet. So incredibly frustrating. The worst part for me is not know how bad (or not) it is. It's all a big waiting game.