Instead of flopping on the couch with a frosty beverage like I normally do on a Friday night, I laced up my shoes and decided to test my legs with a long-ish run.  I had originally thought I should go out and run 20km because I ran 19km the previous week so really why couldn't I run 20?  Hubby a.k.a The Voice of Reason, looked at me like I had grown a second head and asked "Is that smart?".  I had to stop and think about it for a minute.  I figured I could do it so I said "Sure, why not?".   He gave me that look, the one that says, I think you're an idiot without actually coming out and saying it.  Like a dog with a bone, I said Well I ran 19km last week, why shouldn't I be able to run 20km this week?  That's when he let me have it so to speak:  How many times have you run since last week?  uh, twice.  How far did you run each time?  5.5 km and 6 km.  And did you get any blisters?  Oh.  Now I saw where he was going with this.  My last long run ended with me getting several nasty blood blisters on my feet.  It was difficult for me to walk as the skin on my feet was really sensitive.  The thought of putting running shoes on my feet was incredibly unappealing.  The last thing I wanted was another set of those on my feet especially since I was hoping to race on Sunday.  Ah.  Ok.  Fair enough.  Avoid the blisters.  So the plan was to go out and see how I felt and more importantly, how my feet felt.  The new shoes had been good on the shorter runs but I was going long again so who knew.  To be safe, I made a point of slathering up my feet with body glide before I left.
My first few steps felt weird.  I was still tentative, favouring my left side.  These shoes feel so different than my Newtons.  They are so much firmer in the forefoot than the Newtons and I guess I'm not really used to that yet.  I felt like I was running in bricks.  Springy bricks mind you, but bricks none the less.  I soldiered on trying to get comfortable.  My legs felt tired which I expected due to the beat down they got from my massage therapist on Wednesday.  I figured they'd take a couple of days to bounce back.   I went west along my usual route.  It seemed weird to be running it as the sun went down.  I was hoping that I was through Marie Curtis park before dusk hit.  There are some odd characters that frequent that park and the last thing I wanted was a strange encounter of the creepy kind.
It was a beautiful evening.  It had been humid out but as per usual, it was much cooler by the lake.  The hazy late summer light was in full effect as I ran through Samuel Smith Park, casting long shadows on the grass and creating a warm glow amongst the trees. 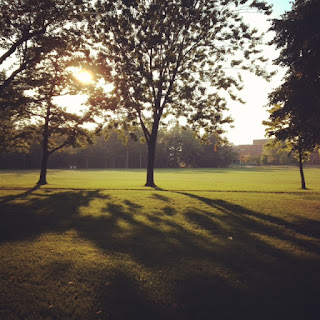 The view didn't disappoint when I made my way around the point on the way out of the park.  Despite the haze you could still see the outline of Burlington in the distance.  At least I think it's Burlington.  Whatever, it was a pretty picture.  So I stopped to take it.  Of course. 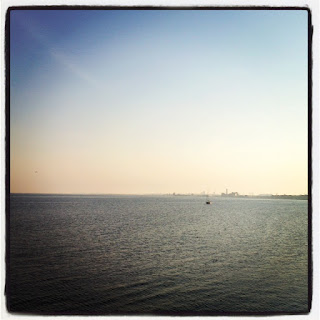 As I got out of Samuel Smith Park, I started to feel good.  My legs started to loosen up and my speed started to pick up a bit.  I still didn't feel as fluid as I'm used to but it wasn't too bad.  My heart rate was still under my target HR by several beats.  I was quite pleased with that.  I'm chalking that up to swimming 21,000m this month (so far!).  I knew my endurance was there but I wasn't sure about my strength.  Almost 4 weeks of no leg work and only a week and a half of slow, sporadic running was bound to take it's toll.
Sure enough by about 7km in, my quads, especially my left one, started to feel a bit sore.  This was a new one.  I probably should have turned around but no, stubborn me started chirping so I kept motoring on.  I made it out to 8.5km and turned around.  My feet actually felt fine.  I didn't feel any blisters forming or anything so I took that as a positive.  By 11km I was really starting to feel sore.  I stopped and stretched and called Gary to ask him to pick up 2 bags of ice.  It was going to be an ice bath night, no question.
The last 6km were just plain ugly.  My left quad was so fatigued, it just hurt.  Then my right quad started to hurt.  I stopped to walk and stretch.  But I didn't get frustrated or upset.  I figured it was just due to my massage.  What I did notice was that I had NO pain in my calf.  No tightness, nothing.  It felt fine.  That in itself made up for my cranky quads.
I tried to push the pace a bit running up my street but my legs wouldn't have it. I turned into the driveway and stopped my watch.  1:28:13 for 17km.  Not bad.  Now to get down to the business of recovery.   As soon as I walked in the door, Gary had a burger ready to go on the grill.  I cut up a fresh-out-of-the-ground red skinned potato, tossed it with olive oil and sea salt laid it out on a baking sheet and put it in the oven.  Next up was a bottle of water mixed with BCAA's while I stretched.  After dinner, I had some fish oil (helps reduce inflammation) and made a shaker cup of chocolate GU Brew recovery.  Guess you could say that was dessert.  I then wrapped myself up and sat in a tub of freezing cold water and 1.5 bags of ice.  Oh. my. god. That HURT.   Right after that, I drained the tub and refilled it with hot water and epsom salts.  I soaked in this for a while until I started to nod off, then I figured I should probably get out and get to bed.  Needless to say, I slept like a baby.  The routine may seem a little excessive but, miracle of miracles, my quads were almost fine this morning.  Going down stairs was a bit of an issue but I think if I sleep in my compressport ForQuads tonight, I'll be fine tomorrow.  Just in time for race day.
So, I'm cautiously optimistic that I've rounded the bend and that this calf injury is behind me.  What I should have done was gone for a massage that first week.  I'm sure I probably would have been back on my feet a lot sooner.  Ah well, you live and learn right?

What do you do for recovery?
Posted by Phaedra Kennedy at 9:42 PM

Wow.
1. What a run
2. Yay that the calves are feeling better
3. That must have hurt!

Congrats on getting back into it. I haven't tried an ice bath yet, but I have tried physio, chiro and strengthening exercises. On a bad day I'll ice and stretch, but mostly I try to rest for a day or two!

Thanks Kate! Yeah the ice bath was a doozy. I find ice followed by heat generally works really well for me. I am SOOOOOO happy to be back running again I can't even BEGIN to tell you!