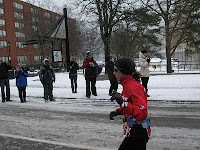 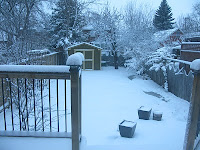 I had no idea what to expect for this race. I had a goal in mind, something I thought I'd be capable of given the little training I've done (sub 1:50). I ran 3 days a week, one long run, usually over distance with race pace segments, and two shorter runs on the treadmill during the week. Usually interval training and nothing more than 8km - 9km. I focused on weight training, usually 2-3 times a week and usually right before a hard run. I think that helped immensely. My legs actually felt pretty good until about 17km then they started to tire out, which is impressive for me. Normally they'd be tired at about 10km.

My goal was to pace myself well and make sure I focused on nutrition and hydration. It rained yesterday and then the temperature dropped and it snowed. Thus the conditions were less than ideal. I'm kind of glad because it forced me to go out easy. I took it fairly easy for the first 2km and as the crowd started to thin out, I started to push the pace a bit. I had gotten a stitch around 3km and it came and went for the entire race. Footing was also pretty crappy for the first half of the race. To top it off my foot pod decided that it wasn't going to work so I was essentially running blind in terms of pacing. I had a pace band for a 1:49:00 half so I was using that and checking my pace at each km marker. I was pleased to see that I was hitting my pace at each km. At some point during the race, I think it was around 7km, I started to pick up the pace a bit. I managed to gain a minute and change by the time I hit the 12km mark. I couldn't believe it. Every km, I checked my watch. I was like a metronome. Always a minute and 3 seconds faster than I needed to be. I made sure I had some gel every 15 minutes and I made sure I drank both water and e-load. I was definitely working but I didn't feel like I was killing myself. I started to hurt around the 17km mark. I still had one half of a gel left and I thought I'd save it till I hit 19km so it would give me a boost for the last 2km. By 18km my stitch had returned full force and was causing me a lot of discomfort. I tried breathing through it but to no avail. The only thing I could do was just keep running and hope that it went away. At 19km I took the last of my gel. I wasn't sure if I would have much left in the tank but I really wanted to push it through the last km. Once I hit 20km, I started to pick up the pace again, despite the fact that my legs were screaming at me. I knew that once I hit the little downhill, I wasn't too far off from the finish line. I could see the crowds getting bigger and I could hear people yelling. As I started to make the turn onto the street where the finishing chute was I heard Gary yell my name. I smiled and waved. The finish line is at the top of a small incline and I busted a gut pushing it all the way. I was NOT going to let ANYONE pass me. I caught a woman about 100m from the line and I didn't let up until I crossed the line. Final time 1:47:49. Am I happy? HELL YEAH. With some better training and some hard work, I think 1:40 is definitely within my reach.


Next Stop: The Toronto Women's Half on May 29th. Bring it on.
Posted by Phaedra Kennedy at 2:38 PM

Oh YAH baby! Way to rock that time!!
Kudos. You should be so proud of yourself! :D