#OperationTop5 - Week 16: Things Were Good, Until They Weren't

OH hey Monday.  What a weekend.  It flew by so fast!  As did most of this month.  Yesterday was our 12 year wedding anniversary.  We spent it at a race, of course, ha ha.  G was racing Paris to Ancaster, this crazy off road bike race that he likes to do every year and I went along to be his Sherpa and cheerleader because that's how we roll.  Honestly, I don't know where the time has gone, all I know is that I wouldn't trade any of that time for the world.  G totally gets me, he's always 100% behind all my crazy plans and he's 100% supportive of everything I do.

To celebrate, we kept things low key and went out to dinner at a local restaurant.  We've eaten out every other night this weekend so we figured why not, ha ha.  We were out Friday night for a friend's 40th birthday, then we went out again on Saturday for another friend's 39th birthday and then we were out last night.  We're also out again tonight with one of G's co-workers from Europe.  4 nights out in a row, I think I'm going to need a day off after all that action!  Well, at least I'll probably get to sleep in a bit this week given that I don't have much in the way of training on my schedule.

After last week's stellar week of training, I had high hopes for this week.  I was looking forward to my big weekend ride and another long run.  But my body had other plans.   Seems to be the story of my life these days.  The older I get the more limits I seem to have.  Things that I could do 2 years ago, I can't do now because I end up with some kind of injury or tweak.  I'm trying not to get too frustrated with my body but it's hard not to, especially when I had gotten into such a good groove.   I'm hoping this little issue gets resolved with a few trips to my ART guy.   I had a day off on Monday and then on Tuesday I had an interval workout.  5x1km intervals.  My legs didn't feel great when I started but I had a good warm up so by the time that was done, I actually felt pretty good.  I hammered out my intervals and I felt really strong.  I was getting close to paces I was running 2 years ago (4:17km, 4:01km, 3:57km, 4:02km, 4:04km).  I felt great.  By the end of the workout, during my cool down, I could really feel tightness in my hamstrings, especially my left one.  I stretched well and didn't think anything of it.  I had a massage on Tuesday night at the massage school by my office.  I've been going there a couple of times a month, in addition to seeing my RMT as I feel I need that extra TLC.  The poor girl was so nervous because her supervisor was going to be sitting in on the session.  Needless to say, it wasn't much of a massage.  I swam the next day, hoping that would help my legs feel better.  They felt ok.  In the evening I had a ride and they felt so/so during the ride but not great.  Thursday morning I went out for an easy run and by the end of that run, my left leg was totally messed up.  I could barely walk due to the pain in my leg.  My sciatic nerve was being pinched.  I figured it was my piriformis again so off I went to see my ART guy.   He did a lot of digging around my glut and hamstring and said I'd probably be sore for a few days.  He wasn't kidding.  Friday I still hurt.  Saturday, I was a bit better but still tender in some places.  I managed a short ride.  Sunday I felt somewhat better and thought I'd try to go for a run while Gary was out racing.  I ran 1.5km and had to turn around I hurt so much.  I cried all the way back to the car.  That was not what I had hoped for and it really bummed me out.

I'm going back to see him this afternoon for some more work as I'm still sore and I can still feel a bit of pins and needles in my leg.  I really hope he can get this sorted out because I'm supposed to race the Mississauga half this weekend and I really DO NOT want to have another DNS this year.

I'm linking up a bit late with Holly & Tricia for their Weekly Wrap.  It's a chance for active women to connect and share their training and racing experiences.  Check it out!

Thursday:  8.5km easy run to test out my new Zoot Solanas.  Everything went to hell after this. 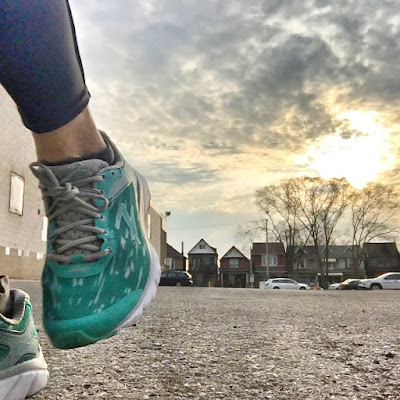 Saturday:  45 minute ride on the trainer.

Total time:  5h 36 minutes.  I had 12h on the schedule but that never happened.  *Sigh*  One step forward two steps back.

On the plus side, this has helped me figure out what I CAN'T do so moving forward my coach has a better idea of how to schedule my workouts.  At least there's an upside, ha ha.

How was your week of workouts?  Who watched Game of Thrones last night????  I did not, but it's on the PVR so I will be tuning in as soon as possible!

Posted by Phaedra Kennedy at 12:21 PM