First of all, I'd like to say thank you to everyone for their comments and encouragement on my post last week.  Being injured sucks.  Being a part of an amazing community where EVERYONE gets what you're going through and knows just what to say...that doesn't suck.  The pity party is pretty much over and I'm accepting the fact that I'm just going to have to take things slow.  The good news is, I now have a plan!

I was fitted for new orthotics a few weeks ago by Babs and they came in last week.  If you've never worn orthotics, you can't just stick them in your shoes and start running.  You have to break them in and that usually means walking around in them for a few hours a day until you can wear them for a full 8 hours.  That usually takes about two weeks.  THEN you can run in them.  And even then you can only run short distances at a time.  So the plan that Babs gave me is to keep all my runs short.  No more than 5 to 6km at a time so I can really focus on my form without fatigue altering anything.  Once I start to integrate my orthotics in, I'll probably run a few more times a week, alternating between 5km and 2km a day.   He only wants me to run 2km in them to start and then slowly work up to running 5km in them.  After that I may be able to start to increase my mileage, depending of course on how my body takes to the orthotics.  If things get worse, it's back to the drawing board.  If I'm ok then I'll gradually start to build up.   It's nice to actually have some kind of plan in regards to my running.  It's actually kind of in line with what I was thinking anyway.  Except of course, I would have thrown a long run in there on Saturdays.  Eventually that will come but for now, I'll take the 5km.

In other news, I went for my first ride on Freewill (the new wheels) on Saturday.  We went out to Durham Forest which is about an hour outside of Toronto.  There was actually snow on the trails which made me a bit apprehensive but once I got going, it was awesome.  G took me on a bit of single track again and I managed for the most part, but had to get off and walk a bit in some spots as the turns were just too tight for my confidence level.  But I'm getting better.  Towards the end of the ride I was bombing down a path towards the car and I actually jumped a root.  I landed, yelled WOOHOO and started laughing hysterically.  We got back out to the parking lot and I said to G, "Can we go back and do a bit more?".   I think this bike wins as the best Christmas present I've ever gotten. 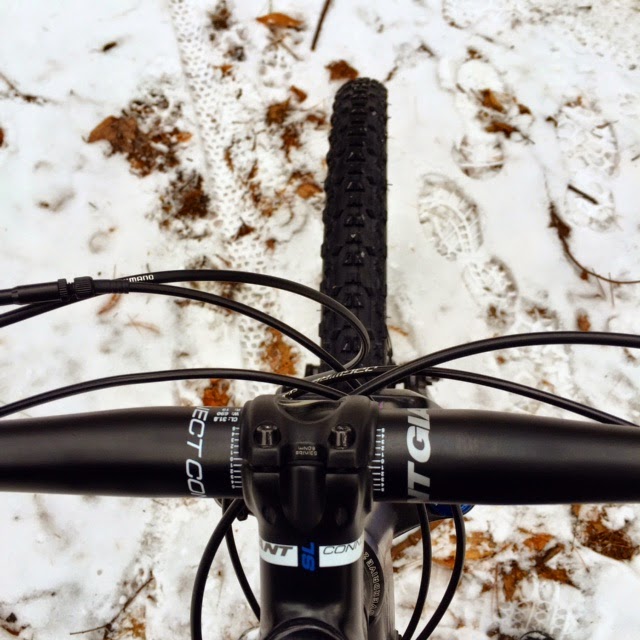 We had a pretty busy weekend with several Christmas parties and I figured I wasn't going to make it to swimming on Sunday (I didn't).  That's what happens when you have a glass of wine + 3 martinis and stay out till 2:30 in the morning.  I'm surprised I wasn't in worse shape on Sunday morning.  I'm chalking it up to the recovery bits.  Stay tuned for a review and giveaway on those babies.


I did manage to get out for a  short run around 11:30.  It was just what I needed.  And, it was PAIN free AND, relatively speedy for my current fitness level.  Not to mention my legs felt awesome.  I'm chalking that up to my RMT & pal David, working the crap out of my knotty hamstrings on Friday.  He's the only person that can tell me my legs are lumpy without me being offended, ha ha.

I had planned on an easier week of training and I guess that kind of happened as my intensity level was a bit lower even though my time was still kind of up there.  I went back to physio and she gave me even more things to do.  This time around, she has me doing a lot of standing work which is much more functional in terms of translating to running.

The numbers for the week:

That was a pretty decent week!

How was your week of workouts?  Who else ran off a hangover this weekend?


Posted by Phaedra Kennedy at 9:59 AM

Pretty good week for being injured! Yep, it sucks! I've got some high hamstring tendonitis and I'm running gingerly through it. I had orthotics (and had a hell of a time getting used to them) only to have them removed when I got a second opinion on the big toe issue. I haven't looked back.

Hang in there Phaedra! You look great!

I love that you are mountain biking in the snow. Reminds me of many of the locals around here.

Look at you in your sparkly, sequin dress? Top? Love it! You guys DO clean up well. I am getting all glammed up this evening for a holiday party - actually looking forward to it. :)