Tomorrow will be my last big run before I start my taper for Boston.  It just so happens that 30km of the 34 I plan on doing will be part of a race.  I'm a big proponent of adding a few races into a training cycle, especially if you're training for a longer distance race.  What better opportunity to practice your "A" race game plan then in an actual race situation?

I'm done fretting about trying to make my goal time for this race.  Instead, I've decided to really focus on my preparation leading up to it.  This will be the last time I get to test my pre-race fuel strategy before the big day so I'm taking full advantage of it.   I tested things out at my last race and I figured I'd have to make one or two tweaks with my race morning fuel.  This time around I'm going to add a bit more chia to my mix and I'm going to have my half Clif bar 2 hours before the start of the race instead of an hour.  I want to make sure that it has time to fully digest before I start running.

I started my carb loading on Thursday.  I normally don't eat a ton of starchy carbs but I added some sprouted grain bread into my lunch that day.  On Friday I added sweet potatoes to my lunch and my afternoon snack consisted of greek yogurt and some Love Grown Oat Clusters.  Normally it would just be greek yogurt.  For dinner, I indulged in some pasta with turkey sausage, spinach, tomatoes & mushrooms.  This morning I made whole grain pancakes with a fruit compote.  My snack was a lighter version (i.e no peanut butter) of my chia pudding.  Lunch was broccoli slaw, veggies and tuna.  Tonight's dinner will be pan seared tilapia, mixed greens and some sweet potatoes.  That's what I had for dinner the night before my last race and it seemed to sit well with me.  I used to have my pasta dinner the night before a race but it really does a number on my stomach so I've taken to eating it 2 days before so I don't have to camp out in the bathroom race morning.

I've been using chia as my breakfast before a long run and it's worked quite well for me over the course of this training cycle.  I've been trying to get my body to burn fat as fuel first before it taps into my glycogen stores.  I'm don't know how to tell if it's working (this is all new to me!) but given that I haven't bonked on a run yet (knock on wood) I'm assuming that it is.  So tomorrow's breakfast will be a big bowl of chia, almond milk, a tablespoon of peanut butter and a scoop of chocolate protein powder.  Yummo!

I don't have much of a game plan for tomorrow's race, other than to try to stay consistent in my pacing.  I am probably going to run a bit faster through the first half because the second half is hilly which is sure to slow me down a little.  I had printed out a pace band but realistically I only care about my splits at 10km, 15km and 20km.  So I simplified things a little bit and made my own little pacing cheat sheet.  I think I'll actually type it out and print it off vs. using my handwritten one.  I'll cover it up with clear packing tape and I'll be good to go. 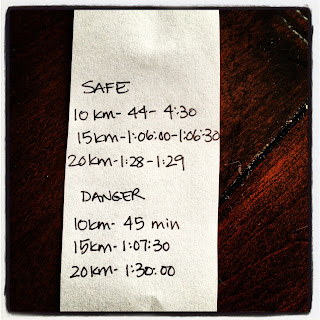 I've got my race ensemble all planned out as well.  It actually matches my bib, which I totally did NOT plan.  And superstitious me is really digging my bib number with multiple 3s and a multiple of 3.  I do this with pretty much ever race bib I get;  I add the numbers up and then reduce it to one single digit number.  So 3+6+3 = 12 then 1+2 = 3.  Given that my lucky number is 3, I'm pretty happy.  I know, I know soooo silly but I don't care.  We all have our "things" and that happens to be one of mine. 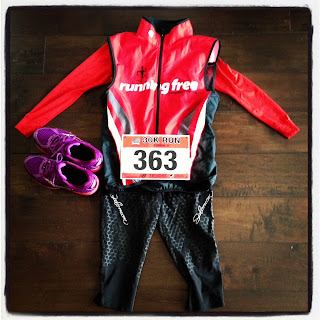 This is also going to be race number two of my #13in2013 challenge.  Things are rolling fast and furious now that race season has started.   Bring it on!

Posted by Phaedra Kennedy at 5:47 PM

Email ThisBlogThis!Share to TwitterShare to FacebookShare to Pinterest
Labels: #13in2013, Around The Bay, Boston Marathon, racing, training

Ha! I love when outfits match the bib! And hey - lucky numbers all the way around that bib!!! ;) You have done super this training cycle and you're going to rock Boston. No pressure!!! :)

I've never considered practicing carb loading before my big goal race. That's a good idea! And all of your meal ideas are making me starving. You've got some seriously good eats going on right now. And I love those purple shoes. I hope the race went well!

Thanks Melissa! Race report is up! woot!

yeah, the only thing luckier would have been bib #333 (which I've had before and it was VERY lucky)!

Yeah it's taken a bit of trial and error over the years to figure out what works for me and what doesn't. I think I've got it nailed down now. The purple shoes are Mizuno Wave Rider 15's - I love them too! The race went REALLY well. Just posted the report.