The Sunday Ritual, an Open House & Another Week of Chaos

I can't believe it's Sunday already.  Where the hell did the weekend go?  Seriously.  What happened?  I know I didn't sleep through it.  Oh yeah, right, we opened our doors to our friends, family and neighbours yesterday for our Open House / Housewarming.  Kids running wild in the back yard, neighbours getting hammered in the kitchen, friends catching up with each other and family being family and totally goofing off.  Wowza.  Talk about a good time.  Due to our Friday night Costco spree and the generosity of everyone that attended, we now have an overabundance of snack food (mostly chips) and booze (mostly wine).  I guess that means we're just going to have to have another party in the not too distant future.

I spent yesterday afternoon running around like a chicken with it's head cut off.  Up and down the stairs, inside, outside, showing people around.  I didn't sit down at all until about 6:00 pm.  I hardly drank any water and I didn't really eat very well so I suspected that today's run was probably going to be a little on the sucky side.  Surprisingly, it wasn't.  Sure my hamstrings were super tight but other than that, I actually felt ok.  I was out for 2 hours and I covered just over 24km.  It was the perfect day for a run and even though I was a bit tired and sore, I enjoyed every minute of it.  Because I didn't drag my butt out until almost noon (so very late for me!) there was a whole different vibe to my run.  Not too many runners out at this point in the day but lots of families and cyclists.  And fishermen.  Yup.  Apparently the Credit River is a hotspot for salmon fishing.  As I was coming back from my turnaround point, I saw a crowd had gathered on the bridge over looking the river and down by the Port Credit Marina.  So of course I stopped.  I finally saw what everyone was looking at.  Some tattooed dude with a fishing rod was wrestling with what I guessed was going to be a very large fish.  Sure enough as he pulled it out of the water everyone gasped.  The thing was massive.  I ran along over the bridge and down to where the other crowd was.  I had to see this up close.  Got up close and was even more impressed.  It was a salmon and it had to be at least 30lbs, if not more.  Crazy. 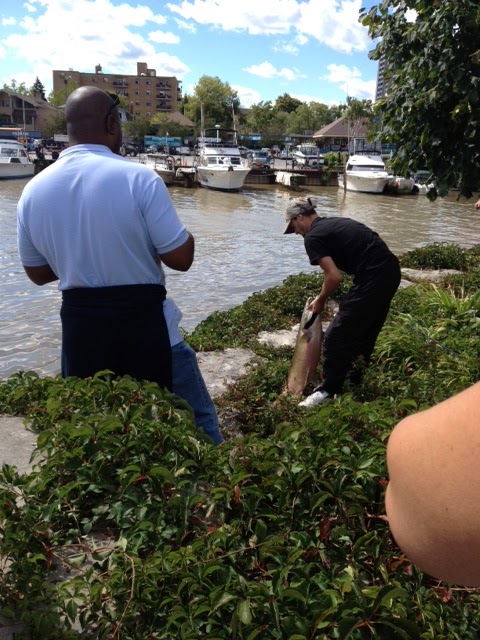 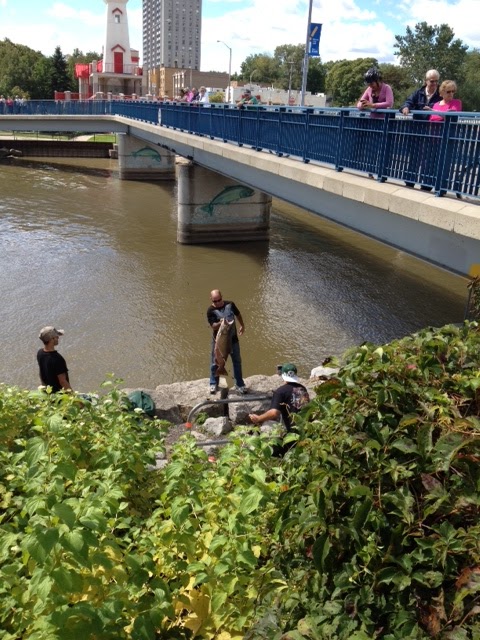 That's the first time I've ever seen anyone catch anything in the Credit River.  I see guys fishing there and around the corner from there all the time and I've never seen anyone catch anything until today.  That was the highlight of my outing.  The second highlight was the weather.  I couldn't have asked for a more perfect day.  It was sunny with those beautiful fluffy cumulus clouds and a nice cool-ish breeze.  Amazing.  Perfect way to cap off a weekend and get me ready for another week of insanity at work.
Speaking of which, I have absolutely no plans for food prep today, other than my fritatta.  Gary is going to be away for work, and I'm going to be shooting 3 days out of 5 this week which is going to mean long days and catered food.  I've got a few pantry items that I can bring in to fill in the off days (thank goodness for canned tuna!).   What I need to make sure I do is bring in healthy snacks.  I tend to fall off the fitness wagon when we shoot because I end up eating things like chocolate covered croissants and overindulging on cheese and crackers.  So the will power is going to have to be on high alert this week, especially because I will probably miss a couple of workouts due to work.  I know for sure I'll be missing my Thursday night run group and there may be a swim workout that gets missed, we'll see.
I was actually pleasantly surprised to see that despite the craziness of this past week, I actually managed to get in most of my workouts.   I opted to skip my swim on Wednesday because I was exhausted and I didn't get a ride in yesterday because we were getting ready for our housewarming but those were the only two workouts I missed.  I got in all my run workouts which I'm pumped about.  This is how it all went down:

Tuesday:   12.96 run (9km at tempo pace)  + 40 minute weight workout included testing my 5 rep max for deadlift and bench press.  I managed 95lbs for my deadlift and 65lbs for my bench press.  My chest was sore for days after that.  And I'm sure that's probably why my hamstrings are super tight.

Thursday:  First day of Auto-Reg training in the a.m..  Very strange but I think I get it.  I need to figure out a game plan when I get to the gym.  Did about 45 minutes of weights.
P.M. Run group workout was a doozy as well:  15x 1:00 minute with 1:00 minute rest.  This workout sounds easy but it's not.  It lulls you into a false sense of security....Oh I can bust my a$$ for a minute, no problem, especially if I get a minute rest after!.  You have to resist the temptation to go out like gangbusters and blow your brains out because if you do, by the time you get to the 10th interval, you will be crying.  You'll want to quit and you will be a LOT slower.  I know because I made that mistake the first time I did this workout.  I didn't make that mistake this time around.

Friday:  Swim, which totally sucked.  Coach moved me up a lane with the really fast people and we did pull and paddles which is my absolute nemesis.  I have gotten better but my kick is my strong point, not my pull.   Whenever I use a pull buoy my rotator cuff gets very angry at me, especially if it's super tight, which it just so happens to be right now.  So, I only did part of the workout, then decided to swim some of it, still felt like crap, so I got out.  Meh,  Some days are good and some days aren't, nothing you can do about it.

Saturday: Off - I had thought about doing a ride but didn't have time.

Not bad.  Hopefully next week will be similar!

Did you get out and run this weekend?  How far did you go?


Posted by Phaedra Kennedy at 4:53 PM

It amazes me how far you run and so quickly and you always make me want to head out for a run too!! haha :)

Your open house sounds fun! That big fish kinda creeped me out. LOL Too much of a good thing?

It was a BLAST. So much fun!! Yeah I was a little creeped out by that fish too. I had no idea that there were fish THAT big in the Credit River. It does feed into Lake Ontario so I guess I shouldn't be surprised.

I've never fished, but imagine that if I did, I would ALWAYS come home with a fish that size.