Runners have always been known to do some crazy things and for some those crazy things involve drinking.  There are people known as Hash House Harriers, who often describe themselves as drinkers with a running problem.  I'm convinced that the idea of the Beer Mile started with them.
If you ask me, the Beer Mile gives an entirely new meaning to the term empty miles.  What on earth is a Beer Mile you ask?

The gist of a Beer Mile is this:  You drink a beer, and you run a lap around a track.  4 laps=1 mile.  4 laps also equals 4 beers which, for some of us lightweights, can be disastrous.  There are actually official rules that can be found here.   The one I like best is if you vomit, you have to do another lap.  That's just plain cruel.  At least you don't have to drink another beer.  I actually think that would be worse.

Beer Miles have become somewhat of a yearly tradition amongst running clubs across North America.  Some do them mid-summer after the spring marathon season is over and others do them in late fall after the fall marathon season is over.  My running club is doing our first ever Beer Mile tomorrow afternoon.  Sure, marathon season isn't over yet but a few drinks never hurt anyone.   Considering I'm planning on doing my long run tomorrow morning, I'll need to replenish my fluids and carbs anyway.  I've done 2 Beer Miles under the old rules, which were that women only had to drink 3 beers.  They've now changed that to 4.  And the beer cannot be light beer.

I have a sneaking suspicion that tomorrow is going to be messy.

I have two goals for tomorrow's event:

2) To be able to walk to the pub afterwards without anyone's help.

As for my beverage of choice, well, it has to be something with at least 5%.  I'd love to drink Innis & Gunn but at 6.6% or 7.4% for the Rum Spice one, I'd be flat on my face after the first lap.  So, if I can find some Blanche de Chambly in a normal sized bottle, I'll go with that.  Hopefully it doesn't taste too bad when I spend 400m burping it.

Here's to no puking and not crawling! 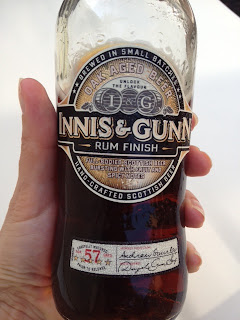 Have you got anything fun planned for your weekend?

Have you ever done a Beer Mile?
Posted by Phaedra Kennedy at 7:41 AM

...and I see you explain it all here, maybe I should read your posts from oldest to the newest and not the other way around...