I heard about this race on the radio one morning on my way to work.  My first thought was Awesome!  Running on tarmac amongst the planes, how cool would that be???  As soon as I got into work I googled Runway Run 2012 and signed up.  I hadn't run a 5km in ages so I figured this would be a perfect test to see where my speed was at.  It was nice and flat and I hoped that we'd be lucky and not have too much wind to deal with.  It was also only about a 20 minute drive from home so I figured why not.
I left my house a bit later than I hoped, due to much messing about on Facebook but I still figured I had a decent amount of time to get there, get my kit and do a short warm up.  It took me just over 15 minutes to get up to Corvair.  I noticed a long line up of cars turning left but thought nothing of it and then realized that I missed the turn.  Ugh.  So I had to keep going north until I found a place to turn around.  The next set of lights allowed me to do just that, along with another dude who also missed the turn.  It meant that I was driving into a long line up of cars that were turning right to get into the airport.  I assumed that all these folks were also doing the race.  I glanced at the clock and it was shortly after 8:00 am.  The race started at 9:00.  We were crawling along.  Of course, I panicked and silently cursed myself for not picking up my race kit earlier in the week.  I couldn't see the parking lot nor could I see where we were supposed to turn.  Oh well.  I'd get there whenever I got there and if I missed the start so be it, nothing I could do about it now.
Turns out I didn't have much to worry about.  As I got closer to the parking lot, traffic seemed to speed up.  I rounded the bend and could see people turning into the lot.  There were volunteers everywhere directing traffic which was great as you were basically told where to park.  There was no driving around looking for the "best" spot so there was no parking lot chaos.  Thank goodness!  I parked the car and followed the crowds to the AMF.  The lot was almost full as well.  I'm glad I left the house when I did or I would have had to find alternate parking.  That would have sucked.  It was almost 8:30 so I had half an hour to collect my bib, take everything back to the car and do a little warm up.  Perfect.

I tried to talk Gary into coming with me but he would have had to pay to go out and watch so I figured he could save that $60 for another day.   In retrospect, knowing what that $60 covered, I should have just paid it for him.  The funds raised by this race went towards Hope Air, a charity that provides flights for Canadians in financial need that live in remote areas that need treatment or care at larger hospital facilities.  The family that spoke at yesterdays event had to travel 16 hours to get their daughter into treatment on a weekly basis.  I missed the first half of the speech as I arrived fairly late but what I heard certainly got me choked up.  I felt like I was back at my very first race, The Run for the Cure, standing in the crowd, alone, listening to the survivors speak and blubbering like a baby.  What can I say, I'm a big softie.  After the speech, I made my way outside and tried to figure out where on earth we were running.
These smaller races sometimes leave a lot to be desired in terms of organization but this one wasn't too bad especially given the fact that it was being held up at the aiport.  The only real issue I had was with hearing the announcements.   It was tough to hear anything inside the hangar unless you were right up by the stage and outside was even worse.  Several of the runners had to step up and ask the people making announcements to speak up.  I made my way right up to the front so I could hear.  I noticed a bunch of other Team Running Free members and we started to chit chat while waiting for the race to get started.  These guys were from the Orangeville Team and they were all really nice (hi to Hannah, Jeff & Len!).  Hannah had just run her first marathon in Ottawa and was still on high from that.  She'd never run a 5km either so she wasn't sure what to expect.  I told her to go as hard as she could for as long as she could.  That's what I was planning on doing.  I'm not going to lie, a small part of me wanted to run leaning forward with my arms extended, you know, like kids do when they're pretending to be airplanes, but I didn't think that would get me very far.

We were finally given instructions to follow the volunteers out to the runway.  I imagine for the volunteers it was kind of like herding cats but they managed to get everyone fairly organized and over to the start line on the runway.   I wished my fellow Team Running Free mates a good race and wandered off to make my way up towards the front.  I manged to find some space about 3 rows back which was perfect.  The countdown started and then we were off.  The crowd spread out very quickly probably because there was a ton of room to do so.  One of the positives of racing on a really wide surface!  This was great as I didn't really have to work my way through too many people.  The course was a big oval.  We ran out about 200 m, made our way around some pylons and then headed out along the runway.  My heart rate immediately spiked and I could feel the lactic acid starting to build in my legs.  My breathing was shallow and ragged.  Not the best way to start a race but at least it was short.  I figured that I'd calm down by the time I hit the first km.  Sure enough, as I approached the 1km mark, I started to feel better.  My Garmin beeped and I looked down to see that that first km was run in 3:44.  Uh.  Wow.  Not sure I'll be able to keep that pace up but it's a good start.  I passed a few guys and then realized that there were no other women in front of me.  Wow, where is everyone? was all I could think.  I figured there had to be another woman close behind me but I didn't want to turn around to check so  just kept running as hard as I could.  Kilometer number 2 rolled over in 3:53.  Whoa, another sub 4 minute km.  Geez.  I was really feeling it in my legs.  It was hot as all hell out on the tarmac.  I figured we should be turning around soon so I kept my eyes glued on the runners in front of me, waiting patiently for a sign that the turnaround was coming up.  Given that the course was totally flat and I had a bunch of taller people in front of me, I couldn't really see anything.  Finally I saw the 3 leaders coming towards me.   Ahhh, I was almost halfway done.  I also got to see where all the other ladies were.
I made my way around the pylons only to be smacked in the face by a headwind.  Awesome.  That would explain my sub 4 minute km's earlier.  I glanced at my Garmin and watched the speed drop.  4:00 min/km's, down to 4:08's down to 4:11's.  I hoped that the 2 women that weren't too far behind me didn't have a strong finishing kick.  I seemed to be able to hang on to 4:10's but I desperately wanted to find someone to draft off of.  I pushed hard to catch the guy in front of me and I tucked in behind him for a bit.  He started to pull away and I couldn't hang on.  I couldn't see the finish but I could see the 4km marker coming up.  I started to tell myself only 5 minutes max, just hang on for another 5 minutes.  I was totally dying.  I was hot, I was hurting and I really felt like I was going to heave.   The triple H was almost in affect!  I was hoping that I'd save the heaving until I crossed the finish line.  Projectile vomit would not have been very sporting of me.  The finish line started to come into view and I saw 2 of the volunteers scrambling with the finish line tape.  I tried to push but I had nothing.  As I got close to the line 2 guys passed me on either side and broke the tape.


Ah well, first place was first place, no matter if got to break the tape or not and I managed a new PB of 20:17 so it was impossible for me to be disappointed.   And the guy in question came up to me much later and apologized profusely which I thought was really nice.  He had no clue that I was the first place woman.  He thought that they put the tape up because he was the first place team finisher.  Such is life.

It was definitely an interesting place to race.  Given the logistics involved I thought that the organizers did a pretty good job.  There was a TON of post race food and water which is always great and there were plenty of porta potties on either side of the hangar so they were very well prepared.  The medal is also pretty cool too.  The best part is that race managed to raise $200,000 for Hope Air.  It's definitely something I'd do again.  If you want something flat, fairly fast and unique, then I'd highly recommend this race. 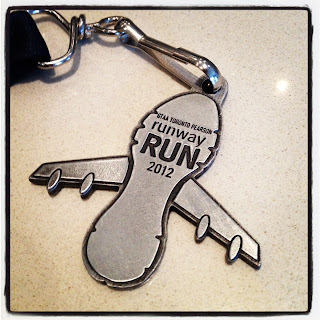 Posted by Phaedra Kennedy at 3:46 PM