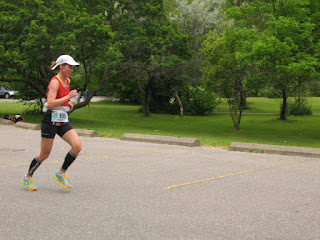 
I got my finishers necklace and turned around to see Jenn cross the line a few seconds behind me.  I went over to congratulate her and she asked if I got a PB.   Nope but I was close.  Shortly after, Sarah crossed the line and we both congratulated her on a great race.   I grabbed some e-load and water and thanked the volunteers.  I wanted to go back out to the 19km mark and wait for Kirsten so I turned around and ran back out, cheering runners all the way back.
I got to the chocolate aid station and got a big hug from my hubby and Babs.  Gary was surprised that I didn't beat my PB.  He said I looked like I was flying.  I explained my "doggin' it" between 4km and 9km set me back a bit.  I hadn't really thought about setting a PB here, nor did I really expect to as it's a somewhat challenging course.  All I wanted was a podium in my age group which I figured I had.  Turns out I managed to land 1st place in my age group and 4th place over all.  A nice little double bonus given that last year I was 5th in my age group and 22nd overall.
I chatted with my friends and cheered the rest of the ladies on.  It was so awesome to see their faces light up when they realized they were at the chocolate aid station.  I spotted Kirsten coming in a bit later than I had hoped.  She looked tired.  She managed a smile as she saw me and happily grabbed a chocolate bar.  I joined her as she slowed down to walk through the 19km aid station.  She wasn't feeling great.  Her legs were hurting and her ankle was staring to bug her.  The uneven footing on some of the paths was less than ideal.  Still she seemed to be in good spirits.  She finished her chocolate bar and we started moving.  She was moving at a pretty good pace as we seemed to be passing a lot of women.  I kept my babble to a minimum.  I know when I'm hurting the last thing I want to hear is someone chirping away incessantly.  I offered up the occasional word of encouragement.  Just as we passed the 20km mark I said less than 1km to go.  Maybe 5-6 minutes?  You can do anything for 5 minutes!  She nodded.  I said that once she got to the parking lot, she only had a few hundred meters.  I know that she has a pretty good finishing kick so I said that once she hit that parking lot, to just lay it all on the line and give 'er.  Sure enough as we got into the lot, she started to pick up the pace.  As we approached the bridge I told her as soon as she came out she'd be able to see the finish line.  As soon as she could see the line she took off.  I jumped on to the grass yelling Go Kirsten and she took off, saying she'd see me on the other side.  When we met up outside the finishing chute, she checked her watch:  2:20:11.  She had missed her PB by only 25 seconds, which on a course like this was impressive.  I was happy for her.   With some more speed work, I think she'll definitely get to a 2:15 half at her A-race in October.  I may join her there as well in my quest to run a sub 1:30 half.  Hopefully next time I'll be organized enough that I won't be racing in brand new shoes.
This years race seemed to be a little more chaotic than last years for some reason.  Perhaps it was because I got there late-ish, I don't know.  There just seemed to be a lot more people milling about an it was a bit more difficult to get myself sorted.  I didn't have any issues on the path this year like I did last year, other than the little back up at the Don Mills Bridge.  The volunteers were great as usual, my only complaint (and it's a shallow one) was that the firefighters never managed to get their shirts off while I was out on the course.  No matter, there's always the 10km in August.  Race director Cory Freedman has definitely put together a great race series and I think it's safe to say that as long as she's putting these races on, I'll do them.

Posted by Phaedra Kennedy at 3:13 PM