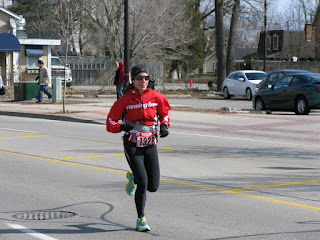 Ok ok, I'll admit it.  I'm a bit of a sandbagger.  BUT, I'm chalking that up to a huge amount of self doubt fueled by my less than ideal training as of late.  I always do this leading up to the first race of the year.  Especially when I feel like things haven't been going the way I want them to.  I grossly underestimate my abilities to the point of being almost completely clueless to what I'm capable of.  Leading up to this I honestly felt like I wasn't going to be capable of pulling off a time that was close to what I ran last year at Scotia.  For some reason, I felt like I had slowed down.   I couldn't have been more wrong.  I obviously must be doing something right because my first race of the year landed me a new P.B for the half.  It wasn't pretty but no matter, it's not supposed to be.

I took it very easy this week.  I was feeling a little run down early in the week so I skipped my Tuesday night tempo and my Wednesday morning swim.  I ran once on Thursday with my run group and then swam again on Friday morning.  Saturday was spent celebrating my birthday by relaxing with my feet up,  encased in a pair of compression socks. I couldn't have gone into to this race more well rested.

I hemmed and hawed about what to wear and opted for compression shorts & my compressport full socks underneath a light pair of tights.  A long sleeve shirt with a short sleeve shirt over it and then my Running Free jacket and a toque.  Excellent call once I started running but not so smart before the race.  Holy smokes was I ever cold.  It was very windy.  Which is not surprising given that Burlington is right on the water.  I figured we'd get hammered with the wind at some point.  I went out for my warm up and my legs felt like tree trunks.  I could barely hold 5:15's.  Of course I got all panicky.  Get off the ledge you silly girl, it's just a warm up.  Right.  I ran about 3.5km and did a few drills, then went back into the Burlington Performing Arts Centre to get warm and try to find Gary.  I found Gary and a couple of our friends, chatted with them for a bit but was getting antsy so I made my way to the start line.

The start line was totally packed as usual.  I wormed my way up towards the front but the closest I could get was up to the 1:45 pace bunny.  Hmmm..oh well.  It would probably be good for me to start off at that pace anyway.   I looked around to see if I could find anyone from my run group but it was way too crowded.  I was surrounded by a whole lot of tall people as well.  No matter.  I'm sure I'll see them all at some point.

The gun went off and the shuffle started.  I crossed the start line and hit my watch.  And we were off.  My legs didn't feel like tree trunks anymore.  I had taken a GU Roctane about 15 minutes before the race started and it must have kicked in.  I started passing folks.  There was a lot of bobbing and weaving going on.  I looked down at my watch and saw that I was running 4:08's.  Nice. I then realized that I hadn't actually started my watch.  I had hit lap instead of start.  UGH.  I hit start and cursed under my breath.  I was now running somewhat blind.  Oh well.

I motored along only to be passed by fellow WTP speedy chick, Diana at about the 3km mark.   Excellent.  If I can keep her in my sights, I know I'll have a good day.  I end up running with a fellow Team Running Free member, Matt from Newmarket, for a little while.  We chit-chatted for a bit and then I pulled away.  I was then running with another fellow who I chatted with for a bit.  Lots of chatty runners!  I told him my predicament about not starting my watch and he told me his time as we came up to the 5km mark.  I had missed roughly 3 minutes.  Good to know.  So I added 3 minutes to my time.  I realized that I should have taken my first gel so I got on that right away.  I was feeling quite good.  I was definitely working but I felt like I was in a good zone.  My pace seemed to hover around 4:20-4:25 km's.  Sweet.  I could see Diana just ahead of me.  I was slowly reeling her in.  At about 7km I was right behind her.  I passed her a little bit later.  We hit an aid station and she pulled ahead.  We yo-yoed back and forth a couple of times.  At one point as she passed me she said "Oh Yeah, 1:40 my ass".  I laughed and said yeah I know, but we'll see what happens to me at about 12km.  We were coming up to another aid station.  Diana slowed down to grab some water.  It was about that same time, around the 10km mark, that Prince's "Let's Go Crazy" came on my shuffle.  I had been feeling a wee bit rough but that song gave me the kick in the pants that I needed.  I could see a woman in front me and she provided the target I needed to push myself a bit harder.  In doing so I managed to pull away from Diana.  I was starting to feel really good.  Definitely in a good groove and my tunes really buoyed me on.  The Arctic Monkeys will always get me going.  I added a few new tunes that I had dug deep into the 80's vault for:  The Stand by the Alarm, Drive by Rush and a great b-side from Spandau Ballet (I KNOW!) called To Cut A Long Story Short.  Spandau Ballet had come on as I was pounding my way to the 13km mark.   It was at about this point that I realized the wind had been at my back.  Oh CRAP.

We hit the turnaround just past 13km and I immediately felt the wind.  I had been running with a big tattooed guy in shorts who had pulled ahead of me a bit.  I tucked in behind him.  As I made my way towards the 14km mark, I saw Diana.  She wasn't too far behind me.   I stuck like glue to the tattooed guy.  I became his shadow.  Wherever he went, I went.  If it wasn't for him I think I would have imploded at about 17km.  At one point I ran up beside him and offered to go in front and try to break the wind for him.  He laughed and told me not to worry.  I would have been pretty useless I'm sure but I thought the sporting thing to do would be to at least offer it up.   So I got right back behind him and continued to draft.  My pace was around 4:24 km's.  I figured if I could keep this up, I'd have a PB.  By what I wasn't sure.  Things started to feel a bit rough at 15km.  I kept telling myself that I only had at most another 30 minutes.  Surely I could get through that.  16km arrived.  Only another 25 minutes at most.  That became my mantra.  At about 17km I lost my tattooed friend when I slowed down at an aid station.  He was just far enough in front of me that I couldn't catch him.  I was on my own in the wind with 4km left.  My legs were pissed.  I could hear someone coming up behind me.  I glanced to my left to see another dude pass me.  Perfect.  I tucked in behind him and hung on for dear life.  18km.  Roctane time.  19km.  Hurting but caught up to my tattooed friend. 20km and the Roctane kicked in.  Just as Rush's Drive came on.  Perfect.  That bass line totally fired me up.  The guy I had drafted off said we have a big hill coming (ha, not really).  I said BRING IT.   He told me to go for it so off I went.  At that point I could see Gary and John I waved my arms in the air, I was so pumped.  I really started to push.  My legs were dying and my lungs weren't far behind.  I was heaving.  There was no way anyone could have said I didn't leave it all on the course.  I was coming up to the corner to turn up the finishing chute when I was passed by my tattooed friend.  He had a serious finishing kick!  I tried to stick with him but couldn't.  My legs were going as fast as they could.  I was closing in on the finish line and could see 1:30 something I looked up as I crossed the line and all I could remember seeing was 1:32 something.  Bloody hell!  A new PB!

I found my tattooed friend, thanked him for his help and congratulated him an a great race.   I then wandered over to the food to refuel and find my hubby.  As I was walking over I heard Diana's name called as she crossed the finish line.  I wandered back over to congratulate her.  By the time I found her, a bunch of the other WTP Ladies had finished.  Everyone was in great spirits.  I then saw Linnea and Glen and then Gary found me.  We wandered off to the warmth of the Burlington Performing Arts Centre to stretch and use the facilities.  I was curious to know my actual time and how I did in my age group.  Gary pulled up Sports Stats on his phone and with a big grin, showed me the results.  First in my age group.  I started crying.  Ok well not full on crying but I did get really emotional.  I was in shock.  I'm STILL in shock.  This isn't a dinky little race by Ontario standards.  There were almost 1800 women and just over 1500 men that participated in this race.  I made the top 20 women overall.  Top 20!  What the hell?

Just goes to show you how clueless I can be in regards to my ability.  Call me a doubting Thomas.  Until it's done, I don't believe it.  Although now that I've done this, it's re-instilled the confidence I had at the end of last year.   It was the mental boost that I so desperately needed.

What a great way to start off the year and an even better way to celebrate turning a year older. Helloooooo 41!
Posted by Phaedra Kennedy at 5:50 PM

Email ThisBlogThis!Share to TwitterShare to FacebookShare to Pinterest
Labels: half marathon, race report

Time to change the name of the blog?? UM hellzya!! Congrats!! Happy Birthday!

Thanks!! HA! I know! At least I added "Other Athletic Adventures" to the title!

What an achievement PK! All your efforts have paid off! Way beyond your previous expectations (given the title of your blog?!) Hoorah! Well done!!
RB