Let The Music Move You

With my A-race being a mere 11 days away, it's time for me to start giving some serious thought to my race day playlist.  Running with music is something I've done for almost my entire life as a runner.  When I first started running I would carry my yellow Sony walkman with me and listen to tapes.  That was 13 years ago.  Now I run with an ipod shuffle that clips on to my shorts, is slightly bigger than a toonie and can hold about 1000 songs.  How technology has changed!

I never used to race with music though.  I'm not sure when that changed for me.  I think it might have only been last year now that I think about it.  I took a musical hiatus when training for both my Ironman races as you're not allowed to race with an ipod.  But soon after I went back to running with music.  There is something about listening to a great tune while running that can turn an ok run into something special.  Maybe it's the evocative power of music, I don't know.  Many of the songs I listen to while running have some kind of positive association for me, whether it be fond memories from high school, memories of an amazing concert experience or memories of good times with friends.  These can be very helpful things when you're pushing yourself.  I know I can't possibly be in a bad mood while listening to songs that have this sort of positive association.  That in turn can help me focus on being positive, which is HUGE when things may not be going exactly as planned during a training run or a race.  A great tune can give me that added "push" as well.  For example this past weekend, at the Korean Peace Run 10km, I was listening to Elvis Costello's "Pump it Up" on my finishing sprint to the line.  Hard NOT to push it when you've got that song blasting.

This playlist will have a diverse mix of music but all of it will be music that gets me moving.  Given that my current shuffle playlist is about 2 days worth of music, I think I have some serious editing to do if I want to get it down to 1 hour and 40 minutes.  I already have some favourites picked out and you know that if Elvis Costello can carry me to a women's overall win, he'll make the cut again for my Scotia Bank Half Marathon play list. 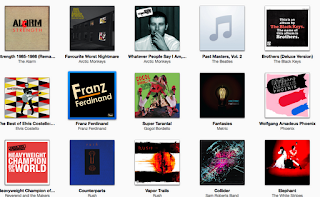 Posted by Phaedra Kennedy at 1:49 PM