The dust has settled and the house is quiet once again.  This past week was a big one!  We hosted some elite triathletes for the weekend, I went to Disney for the first time and I celebrated another trip around the sun.

Last December, one of our coaches here, Sarah McClarty, posted in the Clermont Triathletes FB group that another USAT coach was looking for a home stay for 3 athletes that were coming in to race the draft legal race in Lake Louisa State Park.  It happened to be the same weekend as my birthday.  Gary asked if I'd be ok with having some athletes stay with us and I said sure why not.   The girls emailed us shortly after to introduce themselves:  Sophie Chase, Ellie Abrahamson and Mary Alex English.  They were arriving on the Wednesday and staying until the Sunday.   Fast forward to January and I book a trip to Disney for the day with friends of mine that were going to be visiting.  I booked it on the same day the girls were arriving.  Oops.  Turned out that they weren't going to be arriving until much later in the evening.  That meant that I could stay and watch the fireworks at Disney and still make it home before they arrived.

I never went to Disney as a kid so I never really understood what all the fuss was about.   I always thought that adult Disney fanatics were a bit crazy.  Now that I've been there, I totally get it.  Especially if you went as a kid.  It is a pretty amazing place.  I am thankful that I went with my friends David & Elyse - they are fanatics and they know all the ins and outs of the various parks.  I trusted my trip to them completely and I had a blast.  I'm not a big ride person, mostly because they scare me, but I went on Space Mountain and another roller coaster and I was totally fine.  Space Mountain was a bit disorienting at first because you're in the dark but it ended up being a pretty fun experience.  And none of the rides are terribly long so even if you are a bit freaked out, you know it's not going to last very long. 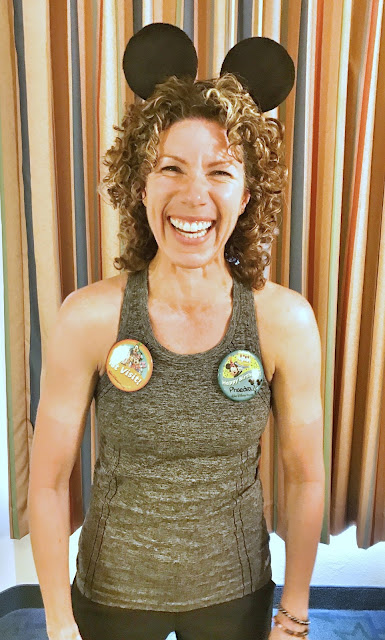 I got there just after 10 and we were in the park by around 11.  I was given two buttons to wear, one that said it's my first time and another that said it's my birthday.  Sure it was a bit early but whatever.  I was celebrating all week, ha ha.  Every single staff member  (or cast member as they are referred to here) wished me happy birthday.  Definitely made for a fun day.  I wasn't sure if I'd last until the evening fireworks but the day flew by.  There is so much to see.  They even do a full on parade at 3:00 pm every day.

We saw some shows went on a bunch of other rides and wandered around.  Surprisingly the park wasn't that busy.  Yes, there was a lot of people around but it wasn't as insane as I had imagined.  Thankfully!  Knowing that our guests were coming in later in the PM I stayed for the fireworks.  I wasn't disappointed.  Disney definitely knows how to put on a show.

I was back home by 9:45 pm, totally sweaty and exhausted.  I really wanted to go to bed but I knew the girls were coming so G and I stayed up until they arrived around 11:15.  We met them all, along with Jarrod, their coach and got them settled.  They were still on west coast time so they stayed up for a bit while G and I went to bed.  G got up to swim the next day but I opted to skip that and hang with the girls in the morning to make sure they were a-ok.  They had to go pre-ride the course but before they could do that, they had to assemble their bikes.  They had no idea how to really do that so G would come in and check on them from time to time.  Their coach told them they had to have their bikes assembled and ready to go for 9:15 am.  I headed out with a couple of friends to do a ride before he got there but I heard he was a little annoyed with them when he arrived.

The girls were racing on Saturday but G and I had committed to doing a charity poker ride that one of my other friends here had told me about.  It was leaving from Winter Garden and was finishing at The Crooked Can which is a great local brewery.  Any ride that ends with a beer is a good ride, in my books.  We got to Winter Garden at about 7:15.  It was COLD.  And by cold I mean 10 degrees celsius, which, when you've been used to 28 to 30 degrees celsius, that feels cold.  My toes were frozen and I wished that I had worn full fingered gloves.  We collected our score card and rolled out with the group.  There was a lot of chit chat.  Again, one thing I've noticed here is that people don't know how to ride in a group properly.  And they wonder why cars here yell at them.  There were a few guys trying to maintain some order and give directions but, it was a bit disorganized.  We did stick together which was nice as there were all levels of riders.  I figured it was going to be an easy ride for me so that was perfect.  Last week was a hard week of training so it was nice to just cruise for a change.  We collected all our cards and headed back to Winter Garden.  I had a crappy hand, but not the crappiest so I didn't win a prize.  There was a prize for the best / worst hands.  G and I sat around for the draw prizes and then went to get a beer.  Well, I had a beer.  We then hit a patio for lunch and after lunch we headed home.  I am not a good day drinker so I was ready for a nap.  But I rallied an managed to keep my eyes open, ha ha.

The girls came back and filled us in on their race.  We were checking their progress online.  We had figured that Sophie would probably win but she wasn't showing any splits after the swim so we figured something happened.  When she got back we found out what went down.  Her top tube snapped.  So, she was out.  She was PISSED.  But Ellie and Mary Alex rallied and came in 4th and 3rd respectively.  Ellie is an insanely fast runner.  She ran a 16:35 OFF THE BIKE.  That works out to 3:19/km.  WTF.   She was so nonchalant about it too when we told her her split.  She had no idea, ha ha ha.

It was so awesome to have the girls with us for the weekend.  On the Thursday night I made dinner for everyone and we sat around and chatted for a long time.  They told us about their experiences so far.  All of them are VERY new to the sport.  This was only their second race.  They were recruited from various track programs.  They weren't necessarily the fastest or highest ranked but they fit a certain body type that USAT is looking for.  They had to pass a swim test and a run test to see if they had potential.  The cycling they would learn.  All 3 of these girls are swimming 750m between 10-12 minutes.  They're averaging around 35-37/kph in pack as this is draft legal and then running anywhere between 16-18 minutes OFF THE BIKE for a 5km.  So amazing.  What I found really interesting was their mindset.  For them it's a job.  They had no real feelings about the sport like age groupers do.  It was kind of strange.  They thought G and I were awesome because we went out and trained on our own vs. being told to.  I thought that was funny.  It's just normal for us.  I suppose if I had started at a high level in the sport, my mindset would be different as well.

They left us yesterday to take over an Airbnb in downtown Clermont for the next few days then they're off to Sarasota for another weekend of racing.  We'll be cheering for them for sure.  Before they left they gave us a card and a signed USA Triathlon cycling jersey, which I thought was super sweet.  I'm SO glad we got the opportunity to do this!

Even with all the goings on, I still managed a solid week of training.  I'm working my way up to a 400km week of cycling.  That's my goal for our last week here.  So there will be plenty of time in the saddle over the next little while.  I'm trying not to neglect other things as well but there is only so much time in the day.  This is how last week went down:

Monday:  OFF - when Training Peaks suggests you may need an extra day off because your form is so low and you're not feeling so awesome, you take the day off.

Tuesday:  2650m swim in the a.m., followed by an 80km  hilly ride to the Yalaha Bakery with fellow TTC'ers Kim Robinson & Halley Georgas.  I got the eclair I didn't get last year.  All is right in the world.

Wednesday:  9.7km run with 4 at tempo pace.  My legs were feeling pretty heavy after the previous days ride but I still managed to nail my paces.  Then off to Disney where I spent all day on my feet.

Thursday:  83km on the TT bike with Halley on the Van Fleet Trail.  It was SUPER windy out.  Definitely a good day to be on the TT bike.  And I did my second brick of the season, we ran 12 minutes off the bike.

Friday:  OFF.  I had planned on doing my long run but I wasn't feeling so hot when I got up so I decided to give myself the day off.  I woke up with a headache that was bordering on a sinus attack so I chilled out.

Sunday:  16.5km long run with 4x2km race pace repeats followed by a 36km spin along the trail for coffee.

Total time:  13h 17 minutes.  My TSS this week was 742 vs 801 and I felt pretty good for the most part.  Accumulating this much fatigue is new for me so I'm trying to be careful and really listen to my body.  I don't know how far I can push things, but I don't think that I want to dip much past -35 in form.  I've gotten down to -28 and I felt pretty tired but not totally smashed.  I was toeing the line for sure though.  A few more negative points and I think I would have been toast.

Tomorrow Eric is flying in and we're getting ready for our first camp that starts on Saturday.  The weather is looking like a roller coaster ride for the next two weeks so I'm crossing my fingers that the rain stays away at least!

Anyone else been to Disney World?  What was your experience like?  Have you gone back again?   I'd go back again but I think I'd go to Epcot instead.

Posted by Phaedra Kennedy at 4:53 PM