Ride to the Hills

What a weekend.  It was hot and steamy and so completely awesome.  G and I went up to Collingwood to train with one of our friends who has a place out there.  I thought Muskoka was hilly.  Wow.   This was a whole other level of hilly.  We rode 102km on Saturday and climbed just over 1000m.  Sunday we did 65km and climbed just over 700m.  My legs took quite the beating.   But it was AWESOME.  The roads are lovely and there were cyclists everywhere.  It was really nice to ride somewhere different.  Our routes don't change much when we're in the city.  I knew we'd be doing a lot of climbing so I left Tom Sawyer at home and busted out Snow Dog.  I had no desire to climb on my tri bike.   I spent more time riding this week that I have running.  My glute is still not happy.  I have a giant knot in it that is clearly putting pressure on my sciatic nerve.  My pelvis is slightly rotated on the right side so my hip is hiked up slightly.  I'm totally out of whack.  I had an appointment with an osteopath last Thursday which helped a bit.  I felt a bit more balanced afterwards.  But the knot is still there so I'm heading back to see Peter again this Wednesday.   I'm hoping his thumbs of steel can crush whatever is left of this knot.  I've been doing my best to work on it a bit every day but it's super stubborn.  So, instead of running, I've been on my bike.  Not ideal given that I've signed up for the Scotia half and I'd really like to run that in under 1h 30.   I'm going to try running tonight.  Fingers crossed it's relatively pain free.

Due to all the riding, this past week was pretty epic in terms of time.  I had wanted to ride on Tuesday morning but pinched a nerve in my neck on Monday at the pool and had to take 2 Robaxacet to relax the muscles.  That totally knocked me out and left me feeling really drowsy and out of it on Tuesday morning.  So, I slept in and took the day off.  I felt better by Wednesday so I made it to the pool.  I had also wanted to get to the gym last week but that never happened either.  Had I been ok on Tuesday morning I could have gone and Thursday morning I had to be at work early so I only managed a ride.  That seems to be the story of my life these days.  That would also explain why my weight has been slowly creeping up and I've lost a fair bit of muscle.  I am aiming to get back to the gym this week.  Twice.

Despite my lack of gym time last week I still managed to pack a lot into 5 days of workouts.  I'm really enjoying riding with the Morning Glory crew.  The rides are tough but everyone is super nice and very encouraging.  And it's always a big group that comes out so I'm never totally on my own.
This is how last week went down:

Monday:  2300m swim
Tuesday:  OFF due to neck
Wednesday:  2400m swim + 7km run.
Thursday:  25km ride
Friday:  OFF
Saturday:  450m OWS (didn't feel like swimming so mostly mucked about in the water) + 102km bike over many many hills.  It was STINKING hot out so it made this ride exceptionally tough.  But I loved every second of it.  Check out that elevation profile!

It poured on us over the last 5km so we got totally soaked and covered in grit and dirt as you can see by my jersey. 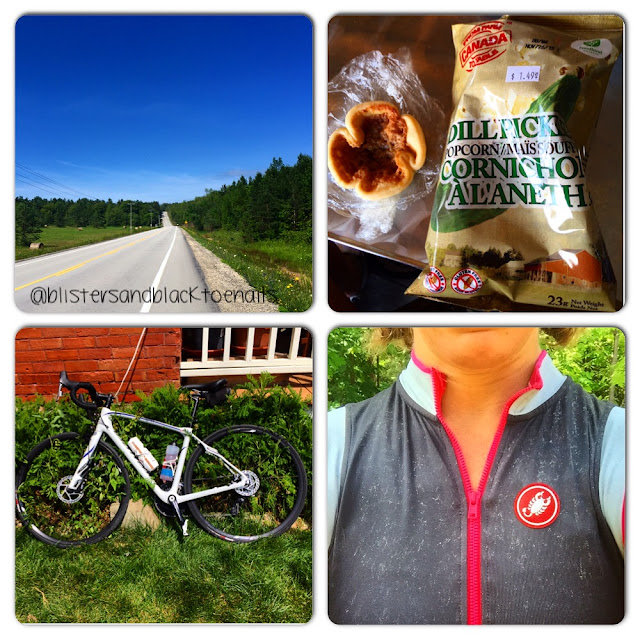 I managed to work on my multicoloured tan lines. 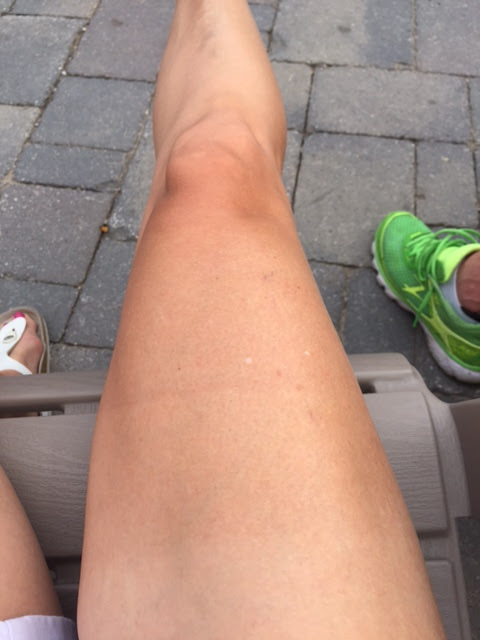 And I re-hydrated with some local beer. 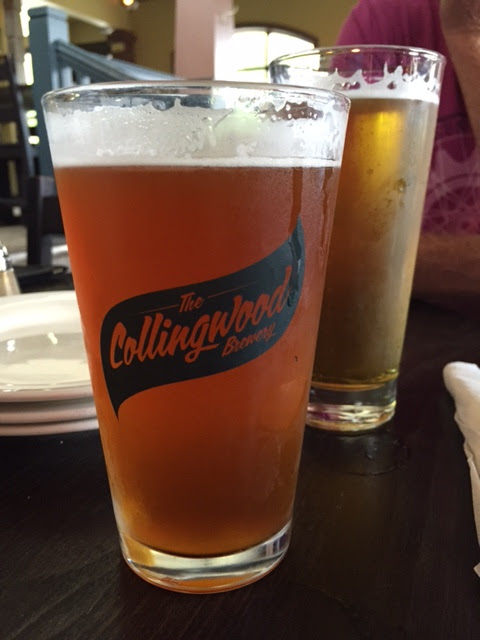 And then we got up to do it all over again.

Sunday:  65km "recovery ride".  My legs were NOT happy for at least the first 35 minutes or so of that ride.  Then they bounced back and I felt much better.  We still managed 700m of climbing on yesterday's ride.  The descent back to Collingwood was worth it.  I almost managed 70kph going down hill on my bike.  If I wasn't such a fraidy cat, I probably could have hit 75kph. 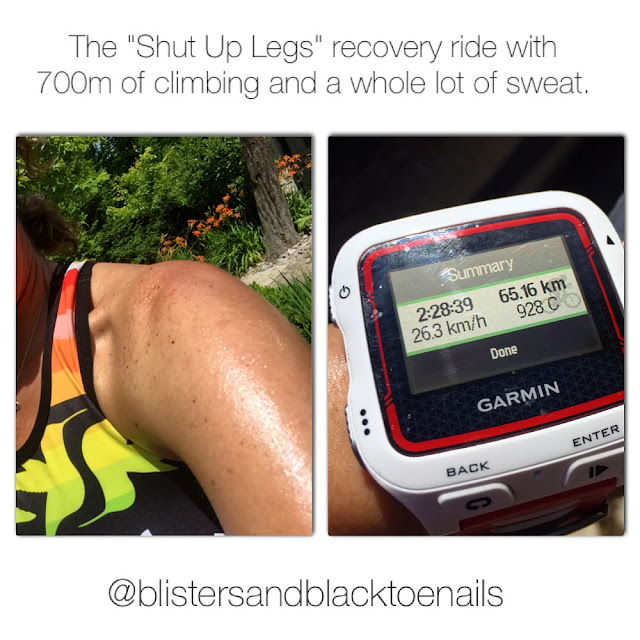 Total time:  9h 36 minutes.  Total bike distance: 193km.  Run:  7km.  Ha ha ha.  Now THAT is an unusual turn of events.   A huge thank you to our friend Carrie and her pal Justin for dragging us around all those climbs.  I'm looking forward to doing it again at some point!

This weekend we're racing again in Bala.  I always look forward to this race.  Hopefully it doesn't rain this year!  The last 2 years I've done it, it's rained.  Right now the forecast is calling for a bit of rain at least in Toronto so we'll see what happens up north.

How was your weekend?  Was it a scorcher?

Nice work on the cycling! That looks more like my ideal week :)

Looks like an amazing weekend! I was on vacation last week and didn't do much (~30k, mostly biking as well). Hope the knot goes away soon.

I'll see you in Bala!