What Was I Scared Of?

The Pale Green Pants With Nobody inside them!

Oh wait.  That was Dr. Seuss.  Heh.  I loved that story as a kid.  It always kinda scared me even though I knew how it ended.

Much like my first open water swim of the season last Saturday.   I KNOW I can swim.  But something really stupid happens to me as soon as I step into a lake with the knowledge that I have to swim a certain distance in it.  I tried my best to remain calm and rational leading up to the swim.   I even went for a warm up swim, panicked a bit during it but figured I'd gotten it out of my system.    For some silly reason I situated myself at the back of the pack, thinking it would be better for me to swim over people vs. having people swim over me.  Realistically I would have been better off at the front because I spent the first few minutes trying to find free space.  Which caused me to panic.  Once I found free space, I panicked because I kept getting splashed in the face and because my breathing was so erratic, I kept choking on the water.  This resulted in a whole lot of back and breast stroke for the first 175m or so.  The next 175m I actually managed to mostly swim due to the current pushing me forward.  The last bit was a combo of angry swimming and breast stroke.  Yes, angry swimming.  I was angry with myself for getting so wound up.  I didn't drown.  Nothing happened to me.  The scary monsters never surfaced.  What the hell was I so afraid of?

I didn't really think about that as I jumped out of the water and ran into transition.  All I thought about was how slow I was (it was 10:50 when I exited the water, 11:31 by the time I got into transition).  And the fact that I had just managed to rip the strap off  the watch portion of my heart rate monitor while trying to get out of my wet suit.  ARG.  So now I was going to race watchless.   AWESOME.

T1 was a bit of a mad scramble for me.  It was under 2:00 minutes, which for me is still pretty good.   I was behind in the pack of ladies in my AG.  There were about 4 or 5 of them ahead of me and one of them was on her way out just slightly ahead of me.  I managed to catch up to her on the long run up to the bike mount line and then I passed her on the climb out of the park.  One down and 5 more to go.

The bike was only 20km on slightly rolling hills so I figured I'd ride like I didn't have to run after.  Which means I went all out.  I started off hard and then backed off a bit because I wasn't sure I'd be able to maintain that pace and not having any sense of time didn't help either.  The surprising part was that I was able to stay in my aerobars for almost the entire race.  That is HUGE for me.  They felt comfortable.  And I have to say, I really love my bike.  At the 10km turnaround, I finally passed the guy in front of me that I couldn't quite get around for the longest time.  After that, I rode as hard as I could.  I didn't get out of the big chain ring, which is another big thing for me.  I'm not usually a big chain ring rider.   This time I got into the big chain ring about 10 minutes into the bike and never got out of it.   I took one Roctane just after I got on the bike.  I figured it might help buffer the lactic acid in my legs.  Worked like a charm.  I caught 2 more women in my AG on the bike.  I was only passed by 2 people, both women that were NOT in my AG.  Whew.    I dismounted off my bike and booked it as fast as I could in my cycling shoes into transition.

T2 was also a bit of a mess.  I had a hard time getting my cycling shoes off (3 straps on each shoe!) and getting my running shoes on.  My hands didn't seem to want to work.   I should have raced in my Zoot shoes but I didn't know what sort of surface we'd be running on so I opted to wear my Newtons given that I haven't run on pavement in my Zoots.  Turns out the run was almost all trail / soft surfaces so I would have been fine.   I finally got myself sorted and out onto the run just as another woman in my AG was heading out.  I caught her in the first 200m.

I had done exactly 3 bricks leading up to this race.  To say I was ready for this would be a joke.  But, 3 bricks are better than no bricks and I think that the 3 that I did actually helped.  My legs felt relatively good considering.   I passed a lot of people on the run.  I was definitely cookin'.  It hurt a LOT but I expect it to.  It's only 4km.  You have to go hard.  I saw Gary just as I came up on the 1km mark.  He was almost done.  Just before the 1km mark, I managed to catch and pass 2 more women in my AG.  I settled into a good groove and was happy to hit some pavement across the top of the dam just so I could get some good footing in.   At the 2km turnaround I checked to see if there was anyone else in my AG that was close.  Nope.  WOOHOO.  I wasn't 100% sure but I figured I was either in 2nd or 3rd.   By this point I was seriously sucking air.   I tried to relax my shoulders a bit in the hopes that would help my breathing.   I crossed back over the dam and hit the 1km left mark.  I dug a little deeper.   With about 500m left, I saw Gary and Roger Hospedales chatting, they cheered me on and I grumbled something about the hurt I was feeling.   I caught an older fella just before we turned down onto the finishing chute.  No one was in front of me but I still gave it my all to the finish line.  I pulled my watch out of my back pocket and looked at it: 1:13:25.  Not bad.

Series Director John Salt was at the finish line greeting everyone and he welcomed me back to racing when I told him I'd been absent for the last 3 years.  I thought that was a really nice touch.   I think it's great to see a race director out there getting to know the folks who actually race in his series, putting names to faces.  His races are always really well organized and I really enjoy the vibe.  Everyone is really friendly and the venues are generally quite nice.  This venue in particular was great.  As much as I freaked out about the swim, the water was actually quite nice.    The bike course was all little rollers, no big climbs, totally my speed considering how little I've actually been riding.  As for the run, I would have preferred pavement but I think the softer surface was actually better for me.

I met up with Gary and Roger afterwards and we wandered off to get some eats.  The post race food was nothing short of awesome now that Hero Burgers is on board as a sponsor.  All they need is a beer company on board and I'd be in heaven, hehehe.    We tried to look at the results but there were too many people so we lined up for a burger instead.  I was curious to see who had the better run split between the 2 of us.   Gary said he ran 4:38's according to his watch.  I thought I was faster than that but had no idea because I didn't have my watch.  So I went to check on my splits after we ate (found out I was second in my AG -woohoo!).  My splits said I ran 4:43's.  Drat.  I didn't think to double check Gary's so for the longest time, I thought he beat me on the run.  It wasn't until we got home that he told me his recorded splits were 4:47/kms.  HA!  He went back online the next morning and saw that Sportstats had updated the timing and he was credited with running 4:38's.  He then told me I managed 4:23's.   I beat him on the run by one full minute.

Oh YEAH, hubby got chicked on the run.

I was second in my AG and 13th woman over all.  Not bad considering the lack of cycling specific fitness I have.    This result has definitely motivated me to get myself into the water, get over that stupid fear and get on with it already.     A few more practice sessions in open water and I think I should be fine, just in time for the last half of the season!

Next up:  maybe the Welland Sprint Duathlon next weekend.  Not 100% sure yet. 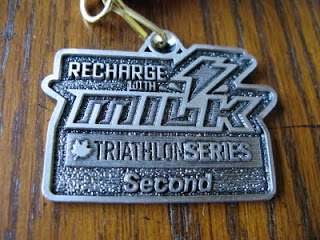 Posted by Phaedra Kennedy at 10:31 AM

Gotcha. Will do.
I did watch a Kona video the other weekend - they were very wobbly getting into their runs! :D

This one-sport-at-a-time consecutively thing is gonna be a whole new deal. I've always had a different concept of "multi-sport" - multiple sports all at once! But I'm up for the challenge!